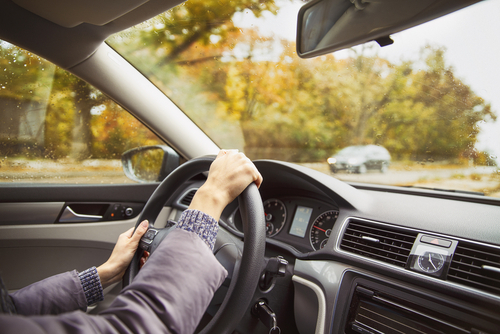 As we adjust our routines in an effort to flatten the curve of the novel coronavirus there is still so much good we can see and do in the world. On this week's episode of This Is the Gospel, Host KaRyn Lay shares a story of a time when her already terrible driving record hit an all-time low and the undeserved kindness of a stranger changed everything.

Read an adapted excerpt from the story below. You can also listen to the full episode here or read a full transcript here.

Well, this has been a wild week in our little corner of the U.S. You're probably feeling it too, with temple closures, the suspension of church services for the next few weeks, and other adjustments to our lives and routines in all of our efforts to practice social distancing. All the events of the last few weeks have me thinking pretty acutely about the ways that we take care of one another in our moments of deep vulnerability.

I started to wonder just how the best parts of us as a community—a global community—are going to shine during these uncertain times. And I felt a deep twinge of hope run through me. We have been preparing for this moment spiritually. So today in celebration of all that is good in us, I'm sharing a tiny story of my own when I experienced a kindness from an absolute stranger in an unexpected way.

I've never been a particularly awesome driver. When I'm overly stressed about something or someone, I really should probably take an Uber. Luckily, most of the accidents I've been involved in have not hurt anyone. But that wasn't true the day that I turned a corner without really looking.

So, it really shouldn't have surprised me when about a week after I got home, I got a flat tire on my way to work. It was the final proof that I needed that life was going to be nothing but sorrow and difficulty from here on out. I was out of hope. And just to put salt in my wounds, when I got to the tire shop to get that tire replaced, they told me that I would have to have all four tires replaced, not just the one with the flat. By the time I left Les Schwab Tires with four new wheels I was spent, and I didn't have any room in my brain for driving. And that's when everything got worse.

Just as I turned the right corner onto the main street from the tire shop, a kid on a bike flew into the crosswalk from seemingly nowhere, and I hit him. With my car. I hit a child with my car. He fell off his bike and I screeched to a stop and immediately ran out to see if he was okay. It seemed like he was in his early teens, maybe he was like 12 or 13. And he said he was fine, and he could walk. His bike was clearly damaged, but I didn't know what to do.

Honestly, I was so distraught, and I'm sure that I probably should have called the paramedics or the police or someone, but I didn't. I couldn't really think clearly in that moment. So, I just gave him my cell phone number and told him to call me when he got home, or have his mother call me when he got home. I very carefully drove back to my office. I mean, I was devastated. What a horrible thing to have happen.

Well, a little bit later, his mom called me and told me that he was totally okay physically, and they weren't taking him to the urgent care anything and they weren't even planning to make an insurance claim. But they did think that it was only fair that I pay for the damages to his bike. So, I agreed that I would meet them at the bike shop so that I could pay the bill. And when I walked into that shop, I took one look at his mom, and it hit me. I could have killed her child. And that's when I lost it. The tears started and they would not stop. I'd like to say that the tears were for the accident and all the trouble that I'd cause for her family. But in reality, my tears were for everything I'd lost for that hope—that hope of a future that was never going to happen.

I awkwardly paid for the fixes to his bike and then I headed back to my office. About an hour after I got back, the front desk receptionist called my office and told me that I had a visitor. You can only imagine my shock when I got downstairs to the front desk and I saw the boy that I'd hit with my car, standing in the lobby. He had his new fixed bike with him and a helmet, which was a new accessory that I suspect was the result of me. And he kind of looked at me weirdly and sheepishly held something out to me. And as I held my hand out to receive it, he said, "This is from my mom. She just wanted you to know that she doesn't hate you. And she thought you might like this." It was a $25 gift card to Subway. We still joke about that, that I might seriously be the only person to have ever been rewarded in sandwiches for nearly maiming a child with my car.

But in all seriousness, the lesson of that Subway gift card wasn't lost on me. And something in me shifted in that moment. I didn't deserve it. I didn't deserve that stranger's kindness. I was just some lady who could have ruined her life. I didn't deserve her mercy or her empathy, or her willingness to show forgiveness. But she gave me those gifts with a generous heart and a gift card. And because of that, I believe that I was healed a little bit more than I had been at the start of the day.

But that simple kindness marked the twist in the dark tunnel. And I could finally see some light, just a little pinprick of light shining through. Her kindness at a time when I should have been the one giving, not receiving, has stuck with me. It has continued to be an invitation throughout my life to see people instead of circumstances and to reach out even if it's awkward. And isn't that the blessing of ministering? That opportunity to show up for one another with the Subway gift card, or the phone call, or the text message, even when we don't know the right thing to say. To give compassion, even when we're not so sure that the person receiving it really fully deserves it.

So, over the next few weeks, as we all lean into our civic duty to protect our communities, I hope we'll also watch for opportunities to lean into our Christian duty to spread the good news [of the gospel] and the good works, to bring light where there's darkness—to minister. We can start small, tiny even. And I know that our efforts will be magnified.