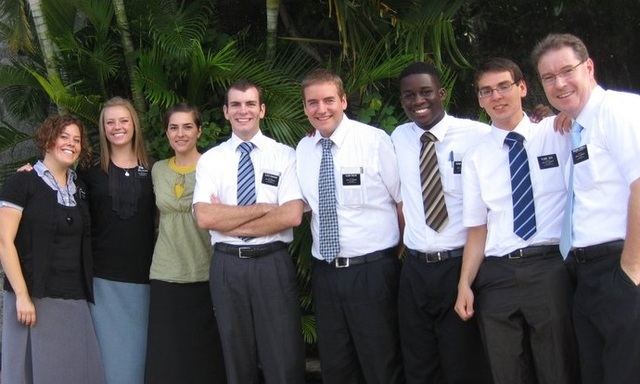 It’s understandable that members become a little distraught when they hear a missionary at their dinner table say that their last companion died, (or even worse, that the elder sitting across the table killed them). They may not realize, however, that the missionary is merely using mission lingo to say that their last companion had finished their mission and gone home.

If this ever takes place at your dinner table, you may become lost in translation. But take heart, though: it’s a common misunderstanding, given how often missionaries use lingo that’s a part of a subculture that naturally blossoms while they labor in the vineyard.

Wherever the source, returned missionaries from all over the globe attest that it was prominent in their service. It has drifted in the air of the southwest deserts of Arizona. It has run along the Gap River which gallivants through Daejeon, South Korea. It has turned the corners of oil-stained streets in Philadelphia and stirred in the City Bowl of Capetown, South Africa.

It was a new discovery for Sister Osanna Emrazian, who couldn’t believe her ears when she heard that her trainer had given birth—to her!  Soon she began to embrace the idioms, after she learned that she was, in fact, “the baby”— and consequently, she also had “sisters” (female missionaries who had also been tutored by the same trainer) and would eventually become a “mom” herself.

But just as quickly as she passed through the pre-earth life (also known as the MTC), she would soon need to leave the frail existence of mission life, as had generations before her. Her “death” marked the end of her proselyting sojourns and the beginning of a strange afterlife.

Lest you become confused, here’s a dictionary of basic mission lingo for the next time you have the missionaries over to dinner.

Father:  the elder who trained you your first transfer or two in your mission. This elder will be your very first companion and thus will have brought you into the world of the mission. He’s your pappy.

Mother: the companion you had right after you were trained by your father. This elder is also sometimes known as the breaker or buster, since it’s his job to break you of all the bad habits your trainer/father instilled in you.

Grandfather: the elder who trained your trainer. He’s your father’s father; therefore, he’s your grandfather. If these elders are still in the mission field when you are there, remember to have a little “family reunion” with your father and grandfather at zone conferences.

Brother: a missionary who was trained by your same trainer. Yes, we know that we are all brothers and sisters in the gospel and in the mission field, but some bonds are closer than others. If you have the same trainer, you and your brother will have the same proselyting tactics and probably the same inside jokes—deep bonds indeed.

AP’s (“apes”): Assistants to the President—the missionaries who serve a transfer (or more), devoting much of their time to fulfilling assignments given by the mission president.

Mother: the sister who trained you your first transfer in your mission. Since the mission field is often referred to as your whole life, your mother will have brought you into the world (albeit without a nine-month waiting period).

Grandmother: the sister who trained your trainer/mother. She’s your mother’s mother, so be sure to give her the respect that the elderly (15-plus months in the mission) deserve.

Sister: a sister who was also trained by your trainer. She will often have the same planning and teaching tendencies as you. Getting her for a companion is always a good time!

*Note: There are no fathers for sister missionaries—all mothers are single mothers!

The lingo certainly causes elders and sisters to turn their hearts to their ancestry—mission ancestry. Some even make pedigree charts and outline predictions as to who will be future trainers or future apes (see “AP’s” defined above), just like an NCAA Tournament bracket. Think of it: March Madness—all mission long.

So next time you have the missionaries over, don’t forget to brush up your mish lingo.