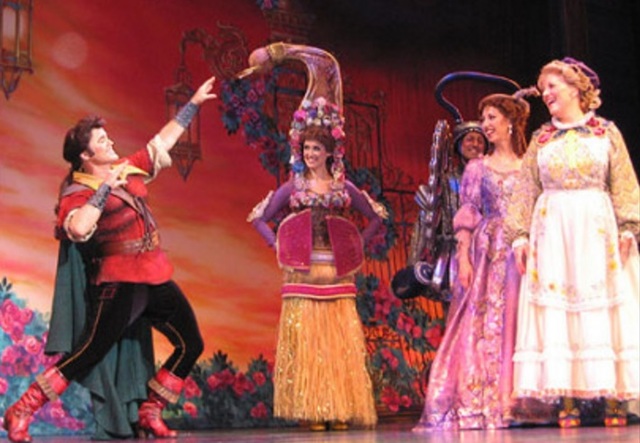 Donny Osmond and Disney go way back. "It's because of Disney that I am in show business. Walt basically discovered my brothers singing in Disneyland and then put us on his television shows," Osmond told broadway.com.

But Osmond solidified his ties to the company when he sang vocals for what Entertainment Weekly has called one of the top 20 Disney songs of all time, "I'll Make a Man Out of You" from Mulan.

"In my grandkids' eyes, this is easily my greatest accomplishment yet," Osmond wrote on his Facebook page.

But Osmond's work with Disney wasn't done yet. In fact, his next star role came without him even needing to try out for the part. Disney approached the famous singer to see if he'd ever consider playing a villain; they felt he'd make the perfect Gaston for the 2006 Broadway run of Beauty and the Beast.

Osmond loved the new challenge of playing a conceited villain, something that contradicts who he is in real life—a fact he attributes to his faith. “It’s kept me grounded in life. As long as you have a belief in a higher power, in God, and you recognize that, it keeps you humble,” he told the Huffington Post.

About the chance to play a villain, Osmond told broadway.com, "This is the role I want to play for the simple reason that it really goes against type. Early in the show, Gaston comes out with this big, toothy grin—it's type-casting for Donny Osmond [laughs]. But in the course of the show, he becomes this creep. The character goes on a journey from being sort of an amusing idiot to being the bad guy. In rehearsal, I had thought that if I do this right, people will applaud at the end when the bad guy dies. At the very first performance, I heard applause when I fell to my death. It was music to my ears."

Despite playing one of the most self-absorbed characters in Disney history and being asked by the multi-billion dollar company to take the role, Osmond remained anything but vain.

After sharing what he needed to do to bulk up to fit the physical prowess required of the role, Donny Osmond added, "Thank goodness my costume helps. Trust me: Prosthetics are a good thing," he told broadway.com.

But there was no question the role did require quite a bit of strength and coordination. "The fights are carefully choreographed, but they can be kind of dangerous, especially the fall at the end. It may not look that bad, but falling backward from that height the first time is scary. The choreography and the tavern scene with all that clinking of mugs are complicated. Beating up the Beast, the musical staging—it's a surprisingly physical role," he says.

Despite the difficulty of the role, Osmond shared on his Facebook page recently how much the play meant to him. "When I hear that trademark music, I can't help but smile and think of my days playing Gaston in Broadway's Beauty and the Beast. Gaston was a very fun character to play. And I must admit, it felt great to let my true colors shine as the arrogant, self-consumed villain."

I watched the trailer for the live-action Beauty and the Beast today. It looks like another Disney masterpiece in the making! When I hear that trademark music, I can't help but smile and think of my days playing Gaston in Broadway's Beauty and the Beast. Gaston was a very fun character to play. And I must admit, it felt great to finally let my true colors shine as the arrogant, self-consumed villain. 😉 I've loved this story, its characters and its music for so long. I just shared the video trailer on my Facebook. Who else is excited to see this movie? #BeautyandtheBeast #Gaston #Disney #LiveAction

And check out this funny video of Donny Osmond running into Gaston at Disneyland: