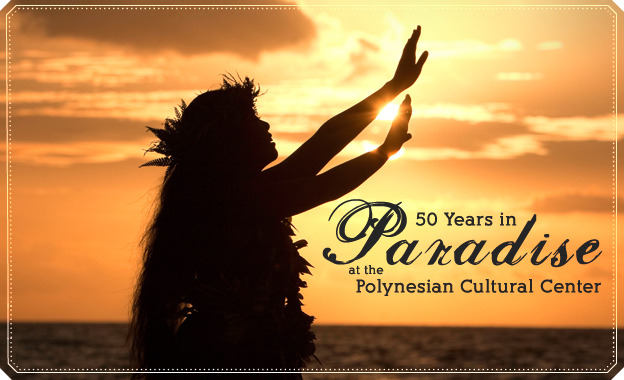 But it serves a much deeper purpose than the average tourist attraction—not only does it share the diverse cultures of the Polynesian islands with millions of visitors, but it also helps people from all walks of life to feel the spirit of love and connection, family and community.

At the Polynesian Cultural Center, the spirit of aloha—mutual regard and affection—permeates the air. Because of the staff’s smiling faces, their eagerness to share their cultures, and their sincere love for all who visit, guests often leave the PCC different from how they came. And while there is no proselytizing, “the Center is all about missionary moments,” says Jimmy Mapu, guest services supervisor. “[Visitors] have a warm feeling in their hearts that they didn’t expect, and many of them end up asking our employees about it: ‘What is this feeling? What is it about this place that makes everyone so happy?’”

There’s a good reason people’s hearts are touched so easily at the Polynesian Cultural Center: it is the culmination of prophetic statements by several Church leaders.

The Church’s history in Polynesia dates almost as far back as the Church itself, beginning on May 11, 1843, when the Prophet Joseph Smith called missionaries to the South Pacific. (Missionaries reached French Polynesia, Hawaii, New Zealand, and Samoa in the mid-1800s and Tonga in 1891, but it would be more than 100 years before they established a presence in Fiji and Rapa Nui—1954 and 1980, respectively.)

In 1865, Brigham Young declared the town of Laie a “gathering place” for the Hawaiian Saints. With the completion of the Laie Hawaii Temple in 1919, even more islanders from throughout the South Pacific were drawn to the area. Then, during a visit to Laie in 1921, David O. McKay envisioned a school of higher learning to complement the new temple. Though it took decades to come to fruition, ground was broken for the Church College of Hawaii (known today as BYU–Hawaii) on February 12, 1955. In his dedicatory prayer, President McKay stated: “We dedicate our actions in this service unto thee and unto thy glory and to the salvation of the children of men, that this college, and the temple, and the town of Laie may become a missionary factor, influencing not thousands, not tens of thousands, but millions of people who will come seeking to know what this town and its significance are.”

But how would the remote community of Laie influence millions of people? The Polynesian Cultural Center would prove to be the answer to President McKay’s prophetic prayer.

About the same time plans were in the works for the Church College of Hawaii, Elder Matthew Cowley of the Quorum of the Twelve Apostles, who presided over all Asian and Pacific missions of the Church, began promoting the idea of a traditional Polynesian village in Laie. He had grown concerned about the erosion of traditional island cultures and suggested that the Maoris coming from New Zealand to do temple work should build their traditional houses, sell handicrafts, and perform so they could earn money during their stay.

In a speech he delivered in Honolulu, Elder Cowley said he hoped “to see the day when my Maori people down there in New Zealand will have a little village there at Laie with a beautiful carved house . . . the Tongans will have a village, too, and the Tahitians and Samoans and all those islanders of the sea.” And in 1962, President McKay authorized the construction of the Polynesian Cultural Center with three goals in mind: preserve and share the cultures of Polynesia, provide financial assistance and employment to students at the Church College of Hawaii, and demonstrate a spirit of love and service to uplift all who visit the Center.

When the PCC opened its doors on October 12, 1963, the local media were pessimistic. “Headlines said that it was destined to be bankrupt in three years,” recalls Lester Moore, former president of the PCC. “They said no one would drive 1.5 hours from Waikiki to watch amateur students perform. At that time, there were only about 100,000 people visiting the islands each year, and no one traveled to the North Shore [where the PCC is located].” And the idea of creating a theme park so students could work part-time and attend college full-time, with the PCC paying the difference, didn’t make sense.

“I don’t know any program on the planet that does this,” says Moore. “How in the world could it financially survive? Isn’t it amazing the Lord would build the PCC in the middle of the Pacific on a little island, farthest from any landmass in the world, and it would become a worldwide destination? It’s absolutely remarkable.”

What’s also remarkable is the amount of financial assistance the PCC has been able to provide. To date, it has sponsored more than 18,000 BYU–Hawaii students. In fact, since 1963, the Center has contributed more than $150 million in direct and indirect funds to BYU–Hawaii, with 100 percent of its revenue used for daily operations and to support education.

More than “Just a Job”

The Center employs more than 750 students from 70 countries, but to them, their time at the PCC is much more than a job—it’s a life-changing experience.

“I never knew I was going to learn more about my culture while working [here],” says Asenaca Vuikadavu, a 24-year-old sophomore from Fiji. “My time here at the PCC has increased my love, appreciation, and respect for my culture and identity. It has allowed me to embrace my culture, and it gives me this onus to preserve it and pass it down.”

She says she has also learned to appreciate interacting with people from different backgrounds. “It has helped me realize that those that I work and interact with are all children of God and there is always something that connects us all.”

Jimmy Mapu, a long-time employee, has also developed a deep love for his culture and for all people, and he believes his 15 years at the PCC are more than a coincidence.

“I had completely different plans for my life, and those plans had nothing to do with the PCC,” he recalls. But after a family tragedy, Mapu returned to Laie to help out, and he sought what he thought would be temporary employment at the PCC. “A funny thing happened in the next few years,” he says. “I gained a great love for the Cultural Center and its mission. I found myself one night, on my knees, asking Heavenly Father if this was where He wanted me to be. Since that time, He has confirmed in both my mind and in my heart that I am here for a reason—exactly what that reason is, I still haven’t discovered, but I have decided that it is my new mission to find out.” He adds, “Von Orgill [another former president of the PCC] used to remind all of the employees here that the Lord has led us by His hand to be here. ‘It’s more than just a job,’ he would often say. ‘The Lord has a very special and very specific purpose for you here.’”

Millions of people have come to the Polynesian Cultural Center to immerse themselves in the cutlures of the eight island nations represented there: Samoa, Aotearoa (New Zealand), Fiji, Hawaii, Marquesas, Tonga, Tahiti, and Rapa Nui (Easter Island). From the arts and crafts to the authentic food to the spectacular night show Ha: The Breath of Life (the world’s largest Polynesian revue), the PCC strives to reach visitors from around the world not only by sharing a love of culture but also by transcending cultural differences and focusing on common values like love and family, community and brotherhood.

“We feel a lot of values that we hold dear as Polynesians are universal,” says Seth Casey, marketing manager for the PCC. “We’re not so different from other cultures around the world, and we all have things in common.”

In the spirit of true brotherhood, the Center welcomes visitors from all walks of life, including celebrities like Stevie Wonder, Jacqueline Kennedy, Henry Fonda, and Kirk Douglas. In addition, the PCC often builds friendships with other nations by hosting foreign dignitaries such as King Taufa’ahau Tupou IV of Tonga and Nigerian Vice President Atiku Abubakar. In fact, through the PCC, the Church has been able to develop a strong relationship with government leaders in China.

For example, in 1984, Elder Marvin J. Ashton of the Quorum of the Twelve Apostles (who was also serving as board chairman of the PCC), hosted Chinese Premier Zhao Ziyang. The following year, Chinese President Li Xiannian toured the Center. And after Vice Premier Li Lanqing visited the Center in the fall of 1994, Church leaders were invited to meet with him in China. After their trip, Elder Neal A. Maxwell noted that contacts between the Church university and the Chinese leaders and people had been warm, “further establishing our genuine friendship with the Chinese people, especially as we explore other ways where additional service may be appropriately rendered.”

Elder Marvin J. Ashton of the Quorum of the Twelve (in sunglasses) and also chairman of the Polynesian Cultural Center Board of Directors at that time, hosts Zhao Ziyang (clapping), Premier of the People's Republic of China.

But whether someone is famous or not, the PCC is dedicated to serving every person who comes to visit and ensuring they experience the spirit of aloha.

“We know that the spirit of aloha is an extension of the Spirit of Christ,” says Casey. “We want to share that with everyone who comes through here, and we are always looking for ways to do that better and better.”

So what does the PCC have in store for the next 50 years? According to Alfred Grace, current president of the PCC, things will only get better.

“Having hosted over 37 million guests since opening, one could certainly say the Polynesian Cultural Center has helped fulfill President McKay’s prophetic statement that millions would come ‘seeking to know what this town and its significance are,’” he says. “However, I believe the best is yet to come as the Polynesian Cultural Center continues to serve as this wonderful doorway for those seeking to know the significance of this very special place where the Lord has chosen to establish His people and bless them abundantly.”

Fun Fact: In June 1966, Elvis Presley spent a week at the PCC filming a portion of Paradise
Hawaiian Style.