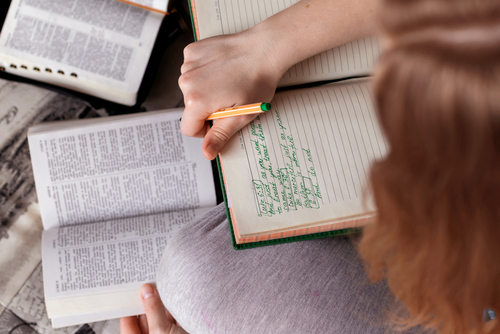 In ancient Israelite storytelling, the meaning of personal names was used to enhance the memorability of a story. Consider the name of Noah in Genesis 6–9. His name in Hebrew, nōaḥ, means “rest,” which represents a major theme in Noah’s story: The dove sought rest as it searched for land. The ark finally rested on a mountaintop. In addition, Noah’s name written backward, ḥn, means “grace,” pointing to a sub-theme of the Noah story, highlighted in Genesis 6:8, where we read that “Noah [nḥ] found grace [ḥn] in the sight of God.” By learning the meanings within Noah’s name, ancient listeners could remember that they, like Noah, could find rest through the grace of God.

This same ancient Israelite practice of using names to express a key theme in a story also applies to names in the Book of Mormon. Here are a handful of these names with meanings that may surprise and inspire you.1

Nephi’s name may come from one of two ancient Egyptian words. The first means “sea captain”—a fitting name for the amateur but faithful shipbuilder.2 The other word, which is more likely the source of Nephi’s name, means “good,” “fair,” or “beautiful.”3

Because of Nephi’s good character, Helaman named one of his sons after him, and he admonished that son: “I would that ye should do that which is good” (Helaman 5:7).4 Even when he declared that he was a wretched man, Nephi’s trust in the Lord was delightful and beautiful, leading him to accomplish that which is good (see 2 Nephi 4). In the same way, Nephi’s name can remind us that we should always try to lead others toward God and seek after all that is good, fair, and beautiful (see Article of Faith 13).

The name Enos is identical to a poetic Hebrew word meaning “man.” The Book of Mormon Enos, like his father, Jacob, was “a just man” (Enos 1:1). Enos’s name echoes the divine title “Man of Holiness,” perhaps meant to remind him of the One we worship (Moses 6:57). Because of this allusion to God’s name found in Enos’s name, when we read about this prophet we are reminded to strive to live like God, emulate Him, and render to Him our thanks all day and all night.

In the Book of Mormon, Enos used his name to recall the patriarch Jacob’s nighttime wrestle with a “man” (see Genesis 32:24–32). Like the Old Testament prophet, Enos wrestled with himself (his natural “man”) before the Lord all night long, seeking answers and blessings, teaching us that as we, too, engage in the wrestles of life, God will answer our prayers and grant us the righteous blessings we seek.5

► You'll also like: What "Sariah" and "Moroni" Actually Mean: Insights into Book of Mormon Names

As we mentioned before, the name Noah means “rest.” But in the case of the Book of Mormon’s King Noah, his actions cause the reader to think of a form of “rest” that we call laziness.

“Yea, and thus [Noah and his wicked priests] were supported in their laziness, and in their idolatry, and in their whoredoms, by the taxes which king Noah had put upon his people; thus did the people labor exceedingly to support iniquity” (Mosiah 11:6; emphasis added).

King Noah “also caused that his workmen should work all manner of fine work within the walls of the temple [a place of divine rest]” and “caused a breastwork to be built before them, that they might rest their bodies and their arms upon while they should speak lying and vain words to his people” (Mosiah 11:10–11; emphasis added).

In the Book of Mormon, we see what happens when a society embraces the leadership of lazy and immoral kings (such as Noah) compared to righteous kings (such as Benjamin or Mosiah II) who labored in the service of their people.6

For years, critics of the Book of Mormon claimed that Alma was misused as a male name. After all, the word in Latin is typically a feminine name. For example, we use the phrase alma mater to represent our schools. The words, in Latin, mean “nourishing mother.”

However, the original language of the Book of Mormon was not Latin but an adaptation of Semitic languages such as reformed Egyptian and Hebrew (see Mormon 9:32–33). In Hebrew, alma means “young man.”7 This helps us remember that both Alma and his son Alma were young men when they were converted and chose to devote their lives to the Lord. Mormon may have used the literary devices alliteration and assonance in the original text—devices that were lost in the English translation—to emphasize the meaning behind Alma’s name. “But there was one among them whose name was Alma [ʿalmāʾ], he also being a descendant of Nephi. And he was a young man [ʿelem], and he believed the words which Abinadi had spoken” (Mosiah 17:2). The similarity of words would have solidified the meaning of Alma’s name in the minds of ancient readers and connected it with other words about faith and gospel teaching.

Knowing the meaning of Alma’s name reminds us to seek the Lord early, while in our youth.8 Like Alma the Elder and Alma the Younger, we must make the choice to devote our entire lives to God’s service.

► You'll also like: The Surprising Meanings Behind "Enos" and "Noah": Insights into Book of Mormon Names

In Alma 19:16, Mormon introduces Abish in the following way:

“And it came to pass that they did call on the name of the Lord, in their might, even until they had all fallen to the earth, save it were one of the Lamanitish women [ʾābîhā], whose name was Abish, she having been converted unto the Lord for many years, on account of a remarkable vision of her father [nāšîm].”

This verse may mean that Abish’s earthly father had a vision and she was converted when he communicated it to her. It may also mean that she saw her earthly father in a vision that converted her to the Lord. Beyond these, there may be yet another interpretation.

Abish is a name combined from two Hebrew words: ʾāb, which means “father,” and ʾîš (pronounced ish), which means “man.” Thus, Abish could be interpreted as “father is a man.”9

What if Abish had a vision of her Heavenly Father and discovered, like Joseph Smith, that He is in the form of a man? Her name would beautifully preserve her testimony of her revelatory experience that “Father [in Heaven] is a man.” This stunning possibility could indicate that Abish is the only named woman recorded in scripture, besides Mother Eve, to have seen God the Father.

Whatever the interpretation, Abish’s knowledge of God motivated her to action and helped people accept Ammon and his message. She knew God was not just some higher power or nebulous force in the universe. She knew He was her Heavenly Father, and that knowledge made a difference in her life. It can make a similar difference in our lives as we read and remember her story.

The meaning of Mormon’s name appears to be a combination of two ancient Egyptian words: mr (the source of the name Mary), which means “love,” and mn, which means “enduring” and “everlasting.” The two words together may mean “love is enduring.”10 Remembering the meaning of Mormon’s name can help us remember the prophet who wrote, compiled, and preserved the Book of Mormon and testified that the love of God through Jesus Christ endures forever. It can help us remember that Mormon gave one of the greatest discourses on the pure love of Christ ever recorded: “But charity is the pure love of Christ, and it endureth forever; and whoso is found possessed of it at the last day, it shall be well with him” (Moroni 7:47).

Even though Mormon lived in a corrupt civilization full of degradation and violence, he repeatedly taught of love and charity for all (see Moroni 7:44–48; 8:16–17, 26; contrast the Nephite condition in Moroni 9:5). We also live in perilous times and find ourselves in challenging circumstances. We should always strive to be good, but even when we slip and fall, we can have confidence that God’s love is perfect and it endures forever. In that love, we can find the grace that will enable us to keep trying and never lose hope.

After considering these Book of Mormon names, do the meanings surprise you? More importantly, do they inspire you? They certainly inspire us and strengthen our testimonies of the truthfulness and power of the Book of Mormon.

The Book of Mormon is literarily beautiful, doctrinally truthful, and everlastingly applicable. These Book of Mormon names stand as additional evidence that the book is of ancient origins and was brought forth by the gift and power of God.

► You'll also like: The Actual Meaning of “Nephi” and 3 Other Book of Mormon Names

9. Matthew L. Bowen, “Father Is a Man: The Remarkable Mention of the Name Abish in Alma 19:16 and Its Narrative Context,” Interpreter: A Journal of Mormon Scripture 14 (2015): 77–93, citing Paul Hoskisson, “Abish,” onoma.lib.byu.edu/index.php/ABISH); Taylor Halverson, “Evidences for the Book of Mormon: Why the Missionary Zeal of Abish,” Deseret News, June 2, 2015.

10. Matthew L. Bowen, “‘Most Desirable Above All Things’: Onomastic Play on Mary and Mormon in the Book of Mormon,” Interpreter: A Journal of Mormon Scripture 13 (2015): 42; Benjamin Urratia, “The Name Connection,” New Era, June 1983, 40. Note that Joseph Smith figuratively used the term “Mormon” to mean “more good.” Similarly to saying “the Bible is the ‘good’ book, the Book of Mormon is a book of ‘more good.’”

More About the Authors:

Taylor Halverson is a Teaching and Learning Consultant at Brigham Young University–Provo who has published widely on scripture, innovation, learning, and technology.

Brad Wilcox is an associate professor in the Department of Ancient Scripture at Brigham Young University—Provo. He is the author of the books The Continuous Atonement and Changed through His Grace.

Matthew Bowen is an assistant professor in Religious Education at Brigham Young University–Hawaii. He is a prolific scripture scholar with specific expertise in scriptural names.