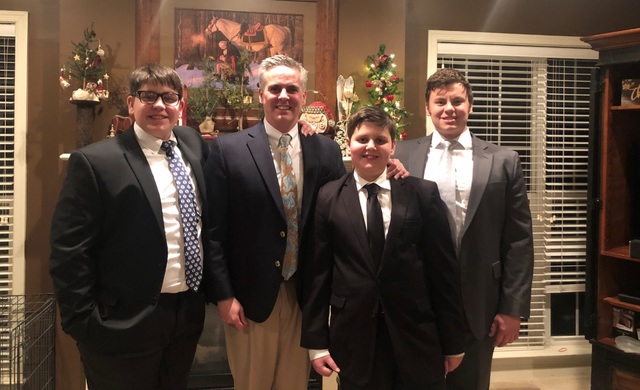 “Dad, can I be ordained a deacon right after midnight?” my 11-year-old, Koleson, asked me from the backseat.

We were rolling down the road running errands one evening between Christmas and New Years.

And so it began.

Later that night, my 15-year-old, Kason, agreed with the idea of taking full advantage of the recent change in youth progression and ordination by being ordained a priest at the earliest possible moment. That Sunday, both were interviewed and presented to the ward for a sustaining vote.

Then, at 12:07 a.m. on New Year's Day, with firework smoke still soaring through the air above Times Square, I laid my hands on their heads in a sacred tradition as ancient as the Old Testament. My son-in-law, Troy (covered previously in LDS Living), joined me.

The Spirit was rich and delicious, like a moment one writes in a journal but wouldn’t need to reread to remember every crisp, colorful detail.

Later that morning, after some sleep and Lucky Charms, I was honored to give my brand new 11-year-old deacon a temple recommend.

In the days since that powerful experience, I’ve asked myself why that moment moved me and my family more than we ever expected.

It wasn’t the unusual hour.

It wasn’t the lingering smell of celebratory chips and dip.

It wasn’t that their two older sisters were both home for the holidays.

It wasn’t even the fact that both wouldn’t have been eligible as 11 and 15-year-olds just a few weeks earlier.

No, what made the night special was the realization that we were experiencing firsthand what President Russell M. Nelson meant when he said, “If you think the Church has been fully restored, you're just seeing the beginning. . . .Wait till next year, and then the next year. Eat your vitamin pills. Get some rest. It's going to be exciting.”

Yes! It’s not about age changes, logistics, and programmatic changes. It’s about the stark and undeniable reminder that we are living in a dispensation of unfiltered, free-flowing revelation through a real-life, breathing prophet of God.

With the boys still beaming from their first experiences passing and blessing the sacrament, I asked them how they felt about making their own history a few minutes after midnight on January 1.

“I felt the Spirit really strong,” Koleson said. “And it was really cool that Troy (brother-in-law) and Kason got to be in the circle.”

Kason agreed. “Very cool,” he said slyly with the breeziness of a seen-it-all teenager.

Naturally, my boys aren’t the only ones in our global Church reaping the benefits of President Nelson’s prophetic promises. Young men everywhere are being ordained at a blistering pace. Young women are advancing through their classes and are being asked and trusted to do more. Both are engaging in family history like never before and taking their own names into temples in every corner of the world.

And they’re doing it not because they can and not because of a policy change but because they want to. Because they long to follow their prophet who promised immeasurable blessings by gathering scattered Israel on both sides of the veil.

President Nelson was right! It is an exciting time! Even at 12:07 a.m.