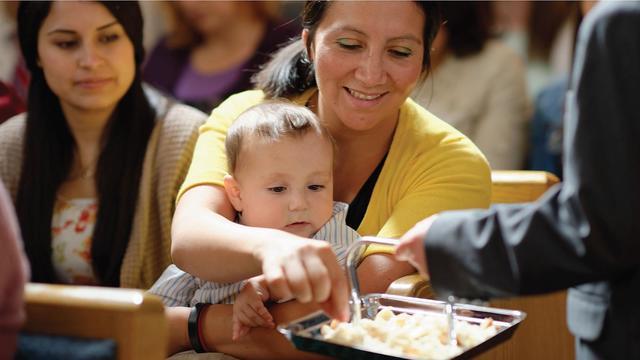 The Surprising and Meaningful History Behind the Word "Sacrament"

At the heart of regular weekly worship in The Church of Jesus Christ of Latter-day Saints is the simple ritual known as the sacrament. Much else is dispensable. Excepting certain conference weekends, however, the sacrament is essential.

The ritual’s simplicity belies its significance. In it, the priests who bless the bread and water for distribution to the congregation ask that those who will partake of it do so in remembrance of Jesus Christ’s physical sacrifice on their behalf, that they will take Christ’s name upon themselves, and that they will always both remember him and keep his commandments.

And, by eating the sacramental bread and drinking the sacramental water after the solemn words just spoken, worshippers covenant that they will, indeed, do those things — for which, the sacramental prayer promises, they “may always have (Christ’s) Spirit to be with them.” (See the full sacrament prayers in Moroni 4-5 and Doctrine and Covenants 20:75–79.)

These are weighty commitments. The apostle Paul certainly thought so anciently. For that reason, he advised at 1 Corinthians 11:27-29, “let a man examine himself, and so let him eat of that bread, and drink of that cup.” Indeed, he warned, “whosoever shall eat this bread, and drink this cup of the Lord, unworthily, shall be guilty of the body and blood of the Lord.” Such a person “eateth and drinketh damnation to himself.”

This momentous significance can be discerned in the very word that we use to identify the ordinance. In Roman law, the “sacramentum” was a deeply sacred oath. In particular, it was the oath taken by soldiers, and especially by the newly enlisted, to be true and faithful both to their commanding general and, in the days of the Roman Republic, to the Republic itself (as represented by the Roman consul). Later, with the rise of the Empire, it became an oath made specifically to the emperor and renewed annually by all of the imperial armies. Accordingly, to violate the oath was desertion, dereliction of duty and perhaps even treason.

The late-fourth-century Roman writer Vegetius preserves the words of the sacramentum as he knew them: “The soldiers swear that they shall faithfully execute all that the Emperor commands, that they shall never desert the service, and that they shall not seek to avoid death for the Roman republic!”

In the ancient Roman conception, the sacramentum was different from oaths commonly taken in court and elsewhere. Most oaths were viewed as creating bonds between members of the earthly community; the sacramentum, by contrast, created a relationship between the human swearing it and the gods.

The person who swore the sacramentum became, himself, “sacer,” something “given to God or the gods” or, in the related English word, “sacred.” Desecration was a grievous thing, much to be avoided. Because they had given their lives to the Republic or, later, to the Empire, Roman soldiers were subject to harsh punishments for infractions that, committed by a civilian, would have been treated with relative mildness.

In the earliest days of Christianity, as the faith spread, Christian vocabulary needed to be invented in many languages, and already-existing words were often borrowed for new Christian uses. “Sacramentum” was one of those words. As a term for the oath of obedience sworn to a sovereign, it is manifestly an excellent name for an oath of faithful obedience to the Lord of the universe.

However, as Christianity spread across the Empire and more and more soldiers embraced the faith, a serious conflict arose. Was the soldier’s principal loyalty to the risen Savior or to the Emperor? Could he in good conscience swear the sacramentum to Rome while remaining a faithful Christian disciple? Some Christian writers argued “No,” and more than a few Roman soldiers became Christian martyrs because of their refusal to compromise their allegiance.

In the church today, as in the Roman army from which the term comes, the sacrament — and, thus the sacramental “oath” — is typically taken publicly. In principle, therefore, all who partake of the bread and water are publicly professing their intention to be faithful and obedient, to always remember the sacrifice of the Son, to acknowledge him as Lord. It is a solemn event, not to be taken lightly or as mere routine. Happily, though, we are permitted to renew our pledge each week as we try to improve. And, even more happily, the Lord to whom we promise fidelity is a forgiving sovereign who, having foreseen our lapses, has already paid for them.

We must simply try to be faithful.