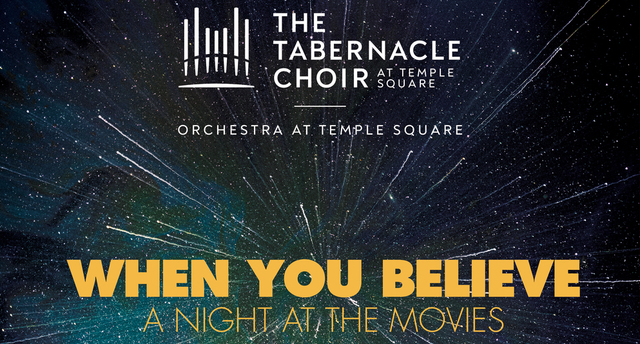 The Tabernacle Choir hits No. 1 on Billboard charts for 14th time

The Tabernacle Choir and Orchestra at Temple Square are celebrating that their latest album, When You Believe: A Night at the Movies, took the No. 1 spot on Billboard®’s Classical Crossover chart for two consecutive weeks. This marks the 14th time that an album from “America’s Choir” has earned the No. 1 ranking on a Billboard Classical Chart.

“Our mission is to provide inspiring music that has the power to help people feel closer to the divine and celebrate God’s love for all His children,” said Choir President Ron Jarrett. “These songs were not only fun to record because of their popularity in blockbuster films, but we’re hopeful they will bring a sense of peace to all who hear them.”

The first single from the new album, “Duel of the Fates,” from the Star Wars franchise, has been streamed 80,000 times on Spotify alone since it debuted on May 1. When You Believe is a five- track EP that includes “Main on End,” from Avengers: Endgame; “I’ll Fly Away,” from O Brother, Where Art Thou?; “Eatnemen Vuelie (Song of the Earth),” inspiration for the theme to Frozen; and “When You Believe,” from The Prince of Egypt.

This album is also the first to feature the Choir’s new logo. The recently revealed mark follows the Choir’s name change announced in 2018 and hearkens to its heritage by still featuring the iconic organ pipes found in the Salt Lake Tabernacle on Temple Square. The new logo visually represents the work of the Choir and Orchestra to bring people closer to the divine through music.

“We chose this music to be inspirational and faith-promoting and we are pleased at the response it is receiving, especially internationally,” said Mack Wilberg, music director of The Tabernacle Choir. “We hope more and more people will enjoy the recordings and have the opportunity to get to know what the Choir and Orchestra at Temple Square have to offer the world.”

When You Believe: A Night at the Movies is available now on iTunes, Amazon, and DeseretBook.com.