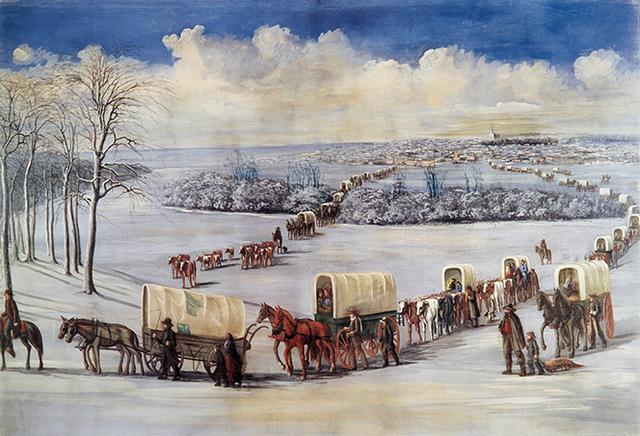 The Town That Rescued 5,000 Mormon Refugees

This weekend, a video was shared in the General Women's Session of  general conference around the meeting's theme of providing relief, particularly for refugees. The video used journal accounts to tell the story of Mormon refugees saved by the citizens of Quincy. Watch the video here and read more of the story below.

In the winter of 1838, Governor Lilburn W. Boggs issued an Extermination Order, forcing thousands of Mormons leave Missouri by March 8, 1839, or be killed. But where were they to go?

With their beloved Prophet Joseph imprisoned in Liberty Jail with the rest of the First Presidency and Boggs’s deadline fast approaching, more than 7,000 Latter-day Saints trudged 200 miles east through snow and mud to the banks of the Mississippi River with hopes of crossing the treacherous and icy water to Illinois. A majority of them ended up in the small town of Quincy, Illinois.

In a remarkable act of love and compassion, the citizens of Quincy came to the aid of the suffering exiles. They collected donations to assist the displaced Saints. Local leaders convened multiple times to consider how to aid the exiled Mormons, and the plight of the Latter-day Saints was often discussed in the local newspapers. For example, the Quincy Whig wrote on March 2, 1839:

“The Mormons—We hasten to invite the attention of the charitable and humane, to the destitute condition of some of this people. A large number of families are encamped on the opposite bank of the Mississippi, waiting for an opportunity to cross, who are, we understand, almost without common necessities of life. Having been robbed of their all in most instances, by their merciless oppressors in Missouri, they have been compelled to hurry out of the state. . . . If they have been thrown upon our shores destitute, through the oppressive people of Missouri, common humanity must oblige us to aid and relieve them all in our power.”

With her husband still in prison and afraid to risk a wagon falling through the ice, she walked across the frozen Mississippi River carrying two children in her arms with another two clinging to her skirt. She also brought with her the manuscripts of the Prophet's translation of the Bible, carefully stowed beneath the folds of her dress.

In addition, Joseph Smith’s parents, Joseph Smith Sr. and Lucy Mack Smith, and some of their family members were among those who found taking refuge in Quincy. At one point, Joseph's parents, his sister Lucy, and brother Don Carlos and his family, and brother Samuel with his family were all staying in the same rented house with four other families. Lucy Mack writes in her history:

"In a few days Samuel moved his family into another house; after which we were less crowded. Soon after he left Lucy [Smith] was taken sick violently ill; and for several days refused to take any kind of nourishment whatever. but I had not long the priviledge of taking care of her; as I was myself shortly siezed with the cholera. . . . Every thing that could be obtained, which was considered good for such diseases, was administered in my case; but without effect. . . . . During my sickness Samuel brought Lucy down stairs several times in his arms to see me; as they did not expect me to live any length of time. . . . Whilst we were sick, the ladies of Quincy sent us every delicacy which the city afforded: in fact we were surrounded with the kindest of neighbors." 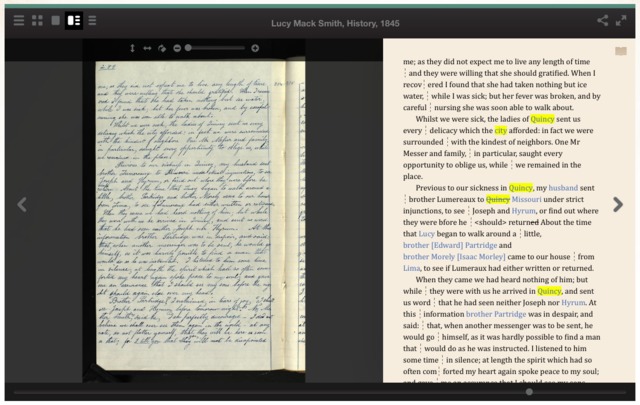 With such an influx of Mormon refugees, the living conditions in Quincy were meager. Yet, the selfless service and sacrifice of the citizens of Quincy gave the Saints time to heal, regroup, and acquire land in the town of Commerce (later renamed Nauvoo) just 47 miles to the north.

In April 1839, Joseph Smith and his brother Hyrum, among others, were "allowed to escape" from Liberty Jail. They arrived in Quincy on April 22 to the delight and relief of the Latter-day Saints. During a conference a couple weeks later, the Prophet counseled the Saints to prepare to leave Quincy so they could establish a city of their own.

However, in 1841, Joseph Smith, Hyrum Smith, and Sidney Rigdon issued a proclamation from Nauvoo that expressed the Saints' appreciation to the citizens of Quincy. It stated: "It would be impossible to enumerate all those who in our time of deep distress nobly came forward to our relief and like the good Samaritan poured oil into our wounds and contributed liberally to our necessities as the citizens of Quincy en masse and the people of Illinois generally seemed to emulate each other in the labor of love."

► Today it's our turn to help refugees. Here are4 Simple Ways to Help Refugees in Your Community. 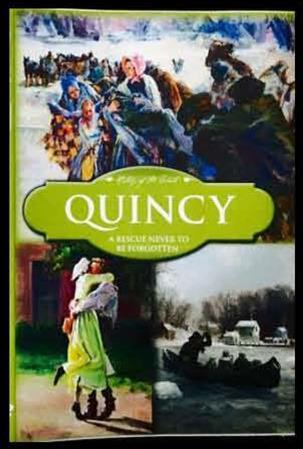 Learn much more about this seldom-told story with Glenn Rawson's documentary DVD, Quincy: A Rescue Never to Be Forgotten. Now available at Deseret Book stores and deseretbook.com.