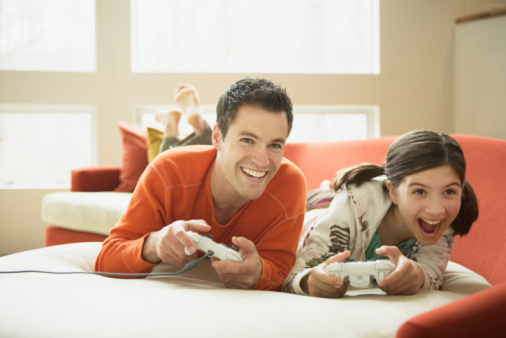 The Upside of Video Games

Note: This is an excerpt from "The Upside of Video Games" in the LDS Living magazine May/June 2011 issue.

Nintendo Wii. iPod Touch. PSP. Xbox 360. If your family is anything like the majority of American families, odds are good that your home contains some technology meant to entertain through virtual games.

Today, 70 percent of American families own at least one electronic that has the primary function of being a game console. It’s not surprising; after all, who doesn’t love a good game? Families can use their system to come together for virtual jam sessions, complete with seriously questionable hairdos and dad’s killer crooning. Or, when the weather doesn’t cooperate, brothers and sisters can burn off that cabin fever with wild tennis swings and party-till-you-drop dance-offs.

On the other hand, there are also video games with more than their fair share of graphic violence, excessive profanity, and other adult-oriented themes. So how can you, as a parent, teach your children about the fun and educational side of games while simultaneously protecting them from content they should avoid?

Gaming as a Tool
Sensationalist news stories and a fair amount of poorly researched disinformation have both complicated a seemingly straightforward process. Much like television, comic books, and movies before, video games have become the latest societal whipping boy—the “devil made me do it” scapegoat for all the world’s woes. Fortunately, as Latter-day Saints, we have access to living prophets, and they seem to be telling a less dire story than the one that mainstream media would have you believe. While it is true that modern-day Apostles have warned us that the excessive playing of video games is to be avoided, they have also reminded us repeatedly that any form of media is ultimately nothing more than a tool.

Like any tool, video games can be used for both good and evil. If we use games as an excuse to escape our responsibilities, ignore our obligations and church callings, or alienate our families, then there’s obviously a problem. Conversely, we can use video games as a medium to interact with friends and family, as a welcome diversion after a stressful day, or as an interactive teaching aid. And those are just a few of the ways that video games can be used to achieve positive results.

As gaming has increased in popularity, researchers have taken more time to study how games can influence and affect us, and some of the most recent results might surprise you. Studies attempting to show that video games lead to delinquency or violence have resulted in tenuous findings, but studies showing the positive effects of gaming have abounded.

Mental Health Benefits
A recent study at East Carolina University found that playing video games can reduce depression and anxiety in the clinically depressed and was also a source for improvement in moods among the participants. This study follows an article by Texas A&M professor Christopher Ferguson published in the European Psychologist last year, which showed that playing certain games can relieve stress, reduce anxiety, and improve players’ moods. He also found that adults who play games handle stress better than adults who don’t, and that after performing a stressful, real-life task, the gamers actually became less anxious and less hostile than their non-gaming counterparts. Facilitating Communication Of particular interest to parents, BYU professors very recently publicized two video-game–related studies demonstrating the emotional and physical benefits to gaming. In the first study, BYU professors Sarah Coyne and Laura Padilla-Walker found that girls who play video games with their parents show improved behavior, better mental health, and a better connection with their families. The professors also discovered that conversations started during game time greatly enhanced and facilitated communication between parents and children.

Improving Physical Health
For parents worried about the sedentary nature of gaming, another study by a BYU professor, Bruce Bailey, along with University of Massachusetts Boston professor Kyle McInnis, found that active video games can provide legitimate exercise for both adults and children. Games like Wii Sports and Dance, Dance Revolution were found to elicit moderate to vigorous energy expenditures while still being enjoyable and relatively easy to participate in.

Parental Guidance Required
You should know how games are rated, which games are age-appropriate for your children, and how to set the parental controls on the video game system or systems in your home.

Game Ratings
The Entertainment Software Ratings Board (ESRB) is a lot like the Motion Picture Association of America, but for video games. Following the same pattern set down by the film industry, the ESRB is a self-regulatory organization that rates video games. Its aims are the same that spurred the creation of the MPAA: to foster public goodwill and prevent government censorship of what they consider a form of speech. All of the major game development studios and most major retailers are voluntary members of the ESRB. This means that every game released on the market is reviewed beforehand and receives a rating.

The aforementioned rating is displayed on both the front bottom-left corner and the back of the game case. Games intended for older audiences will also have a suggested age for which the content contained therein might be considered appropriate, such as “13+” for games rated “T for Teen” or “17+” for games rated “M for Mature.” The rating on the back of the box will detail specific categories explaining the game’s rating such as “Comic Mischief,” “Graphic Violence,” or “Mild Language.” This gives parents a clearer picture of every game’s content and allows them to make educated decisions when completing a purchase.

Parents in Control
Of course, your children undoubtedly play at friends’ houses. Remember, just as with movies, it is not at all inappropriate to call the friends’ parents and explain the types of games you do and do not allow your children to play.

As an extra precaution, modern video game systems come with built-in, easy-to-use parental controls that can automatically limit everything from how long a system can be used on a daily basis to restricting playback of games and movies above a certain rating level. While these safeguards are no substitute for open conversation and clear-cut expectations, they are a simple and effective way to enforce the rules.

Play It Safe
As long as your family has a solid plan, video games can be a fun and engaging part of your lifestyle. By taking just a few minutes to do some basic research and compose a list of ground rules, you and yours can get the most out of this new and exciting medium.

*Click here to take our poll on video game usasge within your home.