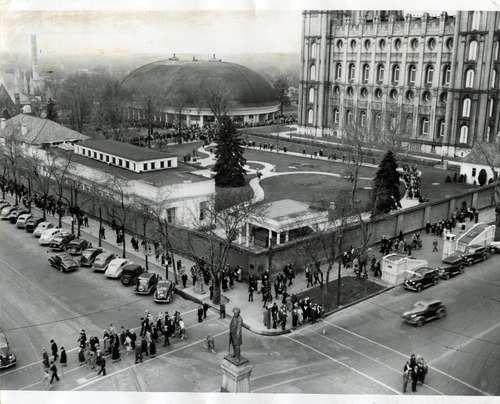 The first recognized conference of the Church was held on June 9, 1830, only a short few months after the Church was organized. The first several conferences looked more like a modern-day sacrament meeting, with an opening hymn, passing of the sacrament, confirming of members, and teaching from the Prophet. Though this was discontinued as Church membership grew, an exception was made in October 1942.

With the outbreak of World War II, there was an extra air of concern and fear for those serving in the armed forces. Therefore, Church leadership designated the Sunday afternoon session to a special fast and testimony sacrament meeting. The following was explained to those in attendance by President David O. McKay, Second Counselor in the First Presidency:

“After the benediction this meeting will be adjourned until ten o'clock tomorrow morning. Being our regular fast day, we invite all of the brethren to come fasting. The first part of the session will be taken up with sermons from the brethren, the national broadcast of the Choir and the Church of the Air program. There will be a thirty-minute intermission between 12 and 12:30. The afternoon session will be devoted to testimony-bearing. The Sacrament will be administered by the General Authorities assisted by approximately forty-five presidents of High Priests Quorums. Admission will be only by tickets. Do not lose your tickets. Do not forget them.”

He then invited Bishops who had been asked to help pass the sacrament to come to the front at the end of the meeting for final instructions.

Joseph Anderson, Clerk of the Conference, recorded the next afternoon's proceedings:

"President Grant was present during the early part of the meeting. President David O. McKay, Second Counselor in the First Presidency, conducted the services at the request of President Grant.

"The Sacrament was administered under the direction of President Rudger Clawson of the Council of the Twelve, assisted by the Presidents of High Priests Quorums and Bishops of wards.

"The time was then devoted to testimony bearing.

"During the meeting President David O. McKay presented to the congregation the following resolution:

"'It is proposed that from this body of Priesthood representing the Church of Jesus Christ of Latter-day Saints there be sent to the President of the United States, the Commander in Chief of the Armed Forces of the country, a memorial soliciting his early consideration of measures to protect more adequately the young men of America, who have been inducted into the Service, against the evils of intoxicating liquor and unchastity.'

"On a motion duly made and seconded, the resolution was unanimously adopted by those present.

"At the conclusion of the meeting the congregation sang the hymn, 'O My Father,' and the benediction was offered by Elder Alex Brown, President of the Seattle Stake."