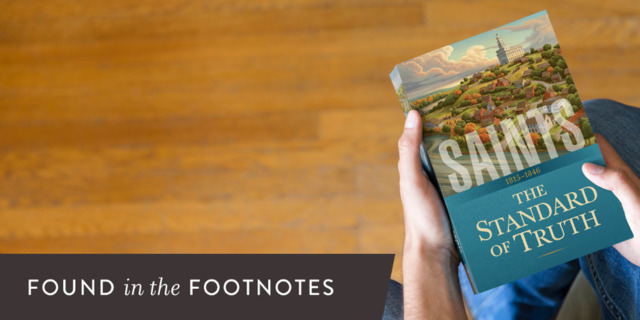 In general conference there are the big moments: the announcement of temples, the calling of new General Authorities and General Officers, and the landmark addresses that change the Church and, sometimes our lives, forever.

But one of my favorite things to keep an eye out for in general conference are what I’ve termed the “announcements you might miss.” Like in April 2020, Elder David A. Bednar said the Church would break ground on 18 temples that year. Or in October 2020, Elder Gerrit W. Gong showed how the four covers of Saints would create a mural depicting “a global tapestry of the fruits of gospel living coming to faithful Saints everywhere.” 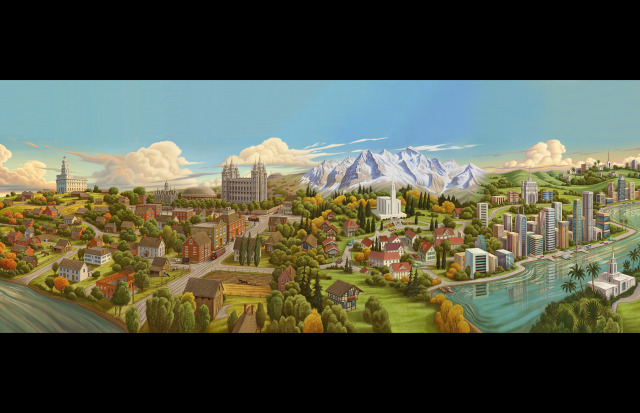 In a footnote of his address, Elder Gong gave us another little sneak peek about the upcoming volumes of Saints:

The titles of the four volumes of Saints come from the inspired testimony declaration of the Prophet Joseph in the Wentworth letter—The Standard of Truth; No Unhallowed Hand; Boldly, Nobly and Independent; and Sounded in Every Ear.

Those phrases instantly transport me back to missionary zone conferences and district meetings where we would unitedly recite the words of Joseph Smith:

The Standard of Truth has been erected; no unhallowed hand can stop the work from progressing; persecutions may rage, mobs may combine, armies may assemble, calumny may defame, but the truth of God will go forth boldly, nobly, and independent, till it has penetrated every continent, visited every clime, swept every country, and sounded in every ear; till the purposes of God shall be accomplished, and the Great Jehovah shall say the work is done.

But until I read this footnote in Elder Gong’s talk, I didn’t realize where this paragraph came from—the Wentworth Letter. So, I quickly did a Google search and instantly found it in a 2002 Ensign that shared this introduction from Elder B. H. Roberts:

“The letter is one of the choicest documents in our church literature; as also it is the earliest published document by the Prophet personally, making any pretension to consecutive narrative of those events in which the great Latter-day work had its origin. . . . For combining conciseness of statement with comprehensiveness of treatment of the subject with which it deals, it has few equals among historical documents, and certainly none that excel it in our church literature.”

The letter was written by Joseph Smith in March 1842 at the request of John Wentworth, a newspaper editor and proprietor, who wanted to provide it to his friend, Mr. Barstow, who was writing a history of New Hampshire. I was surprised to find the entire letter a compelling read. It includes the First Vision, Joseph Smith translating the Book of Mormon, the Church’s destiny to persevere through persecution, and the Articles of Faith.

When I read it, perhaps what stood out to me the most was the Prophet’s firm conviction of the power of this Standard of Truth. Right before the part I know by heart, he writes:

Persecution has not stopped the progress of truth, but has only added fuel to the flame. It has spread with increasing rapidity. Proud of the cause which they have espoused and conscious of our innocence and of the truth of their system, amidst calumny and reproach, have the elders of this Church gone forth and planted the gospel in almost every state in the Union. It has penetrated our cities; it has spread over our villages and has caused thousands of our intelligent, noble, and patriotic citizens to obey its divine mandates and be governed by its sacred truths.

This took me back to Elder Gong’s conference address, where in referencing the year angel Moroni first appeared to Joseph Smith, he said:

In 1823, who would have imagined that in the year 2020 there would be three countries each with more than a million members of this Church—the United States, Mexico, and Brazil?

Or 23 countries each with more than 100,000 members of the Church—three in North America, fourteen in Central and South America, one in Europe, four in Asia, and one in Africa?

In a footnote of his address, he shares:

The 23 countries are the United States, Mexico, Brazil, the Philippines, Peru, Chile, Argentina, Guatemala, Ecuador, Bolivia, Colombia, Canada, the United Kingdom, Honduras, Nigeria, Venezuela, Australia, Dominican Republic, Japan, El Salvador, New Zealand, Uruguay, and Nicaragua. Australia and New Zealand are included in the four countries in Asia with over 100,000 members. Paraguay has over 96,000 Church members and may be next to join the 100,000-member group.

Like Joseph Smith said, truly the truth of God is going forth boldly, nobly, and independent.

Looking back at the mural created by the four volumes of Saints, my eye is instantly drawn to the temples. I recognize the Nauvoo Illinois Temple and the Salt Lake Temple alongside the Assembly Hall and Tabernacle right off the bat. I think I recognize the other temples in the painting, though I’m not quite sure: the Bern Switzerland Temple (though it does closely resemble its sister temple, the Hamilton New Zealand Temple), the Hong Kong China Temple, the Accra Ghana Temple, and the São Paulo Brazil Temple.

► You may also like: From fundraising to foundations: 13 surprising facts about 3 pioneer temples

Through those temples in that mural, I see the promise being fulfilled that the gospel will penetrate every continent. And we can be a part of the fulfillment of that promise if we do our part. In his address, Elder Gong said:

As we increase our faith in Heavenly Father and Jesus Christ, receive the blessings found in living restored gospel truths and sacred covenants, and study, ponder, and share about the ongoing Restoration, we participate in fulfilling prophecy.

We are changing ourselves and the world in a gospel pattern that blesses lives everywhere.

It is my hope that we can all enjoy the fruits of gospel living, just like the Saints tapestry depicts.