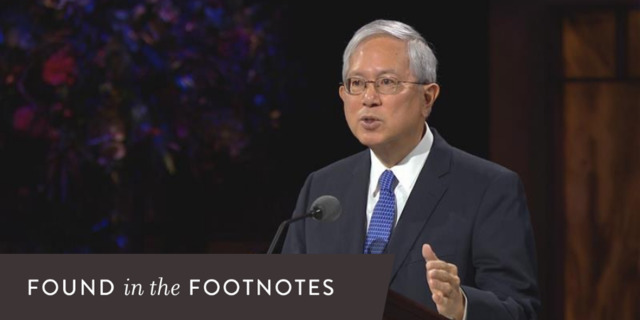 Do you ever listen to a general conference address and hear one line that is so intriguing that you think about it for weeks?

I’ve pondered one line in Elder Gerrit W. Gong’s October 2020 conference address over and over again since conference: “In proclaiming ‘liberty to the captives,’ the Lord promises His Atonement and gospel path can break temporal and spiritual bonds” (Isaiah 61:1).

And I think one of the reasons this line stuck with me so much was because of the footnote that accompanies it: “This hope of freedom includes those seeking to overcome debilitating habits or addictions, self-defeating behaviors, intergenerational guilt, or any sorrow.”

Are we not all held captive by at least one, if not multiple, of those things?

But we have the promise that through Jesus Christ’s Atonement and through following the gospel path, we can be set free. The hope of freedom is real because Jesus Christ is real.

Author John Bytheway’s list of “Five Scriptures That Will Help You Get through Almost Anything” includes the passage found in Alma 7:11–12:

And he shall go forth, suffering pains and afflictions and temptations of every kind; and this that the word might be fulfilled which saith he will take upon him the pains and the sicknesses of his people.

“The words ‘sin’ or ‘sins’ do not appear anywhere in those two verses,” Bytheway wrote. “But notice the other words—things in addition to sins that Jesus took upon him: pains, afflictions, temptations, sicknesses, and infirmities. Alma and Amulek must have relied on the Atonement of Christ to get them through the sadness, the nightmares, and the emotional trauma of the tragedy in Ammonihah. We must rely on the Atonement to help us through our personal tragedies as well.”

I’ve often wondered what it looks like when I’m successfully relying on the Atonement to help me through my personal tragedies. If I’m still pained by them, does that mean they still hold me captive? Have I failed to use the Savior’s Atonement if I don’t feel totally free?

In A Case for the Book of Mormon, Elder Tad R. Callister shared the following:

It is one thing to understand that the Savior has comforting and healing powers. It is another to know how these powers might be applied in our own lives. The Book of Mormon shares multiple ways in which this is accomplished. Sometimes the simple words from the Lord, “Be comforted,” are sufficient. When the sons of Mosiah needed comfort as they began their mission to the Lamanites, “The Lord did visit them with his Spirit, and said unto them: Be comforted. And they were comforted” (Alma 17:10; see also Jacob 2:8).

When Limhi and his people were in bondage to the Lamanites, they suffered great afflictions, “and there was no way that they could deliver themselves out of their hands” (Mosiah 21:5). Then the Lord stepped in with His comforting powers “and began to soften the hearts of the Lamanites that they began to ease their burdens” (Mosiah 21:15).

On a similar occasion, when Alma and his people were in bondage, the Lord chose yet another way to comfort His people:

“I will also ease the burdens which are put upon your shoulders, that even you cannot feel them upon your backs, even while you are in bondage; and this will I do that ye may stand as witnesses for me hereafter, and that ye may know of a surety that I, the Lord God, do visit my people in their afflictions.

The Book of Mormon not only helps us understand that God can comfort us, but it also gives us specific examples as to how that might occur—by sharing the power of His words, by enhancing our eternal perspective, by softening the hearts of our enemies, and by strengthening us so we can more easily bear the burdens at hand. No doubt the Lord can comfort us in other ways, such as removing the affliction entirely, if He so desires. Recognizing all this, it is no wonder that Alma should say: “For I do know that whosoever shall put their trust in God shall be supported in their trials, and their troubles, and their afflictions, and shall be lifted up at the last day” (Alma 36:3).

Relief came in many different ways to the people in the Book of Mormon. So it will likely be with our lives too. I love what Elder Callister shares in a footnote that accompanies this passage:

I am not sure if Jesus acquired all of these comforting powers as a result of His Atonement or if some are independent powers possessed by the Savior, but it seems plausible that Christ knows which comforting powers to use in each of our trials because, as a part of His Atonement, He suffered all our afflictions and thereby knows “according to the flesh how to succor his people according to their infirmities” (Alma 7:12; emphasis added).

I love this thought. When it comes to liberating us from our captivity, including captivity caused by sorrow, Christ is not only able to free us—He knows the best way to free us. And because of that, we can have hope for freedom, and a hope that freedom will come in a way that is perfectly catered to our needs.

As Elder Gong said in general conference, “Truly, for those with faithful hearts and eyes to see, the Lord’s tender mercies are manifest amidst life’s challenges. Faithfully met challenges and sacrifice do bring the blessings of heaven. In this mortality, we may lose or wait for some things for a time, but in the end we will find what matters most. That is His promise.”

Before The Church of Jesus Christ of Latter-day Saints was officially organized, its keystone was in place. That keystone, the Book of Mormon, has been shared, studied, respected, and embraced by millions of people the world over. It has also been scrutinized, analyzed, dismissed, even ridiculed by critics for nearly 200 years.

In this volume, best-selling author Tad Callister offers a comprehensive overview of many of the critics' claims and provides carefully reasoned explanations that shed new light on the discussion. He presents compelling evidence, both physical and spiritual, for the authenticity of the Book of Mormon and invites readers on a spiritual journey that promises a witness stronger than any intellectual argument could create. A Case for the Book of Mormon is available now at DeseretBook.com.