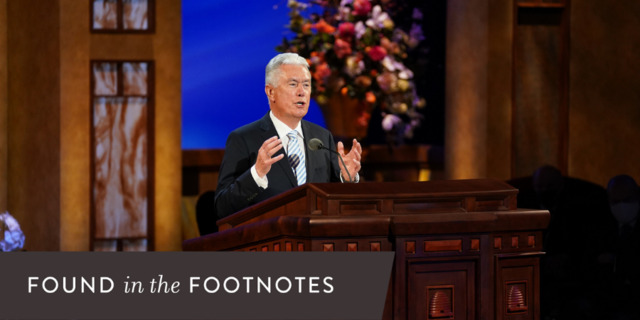 My testimony of the inspiration behind general conference messages has been deepened this year in many ways. Let me tell you about a few of them.

“Heavenly Father was helping me and giving me so much, it was not hard for me to decide what to talk about in this case because He kept prompting me,” she said. “So when I had the assignment, I already had much of my talk written. And of course, I worked on it for months after, because Heavenly Father cares about every word, and just refining, and taking things out, and adding things . . . and as things started unfolding even over the summer, and the events in our country, and the division—it just became impressed upon my mind that this really was an important message for our time.”

My colleague Danielle Christensen wrote a summary of the podcast episode, and I love the quote she chose to include in the headline, “Heavenly Father cares about every word.” Isn’t that a beautiful thought? Every word spoken over the general conference pulpit is known to heaven.

► You may also like: ‘Heavenly Father cares about every word’: Sister Craig on receiving the inspiration to write her October 2020 general conference talk

Another moment that deepened my testimony of the inspiration behind general conference messages is when I read the new biography of President Dallin H. Oaks, In the Hands of the Lord. The biography addresses several aspects of President Oaks’s life. I really felt like I got to know the man behind the pulpit and see how his greatest desire is to do the work God wants him to do. In part of the biography, several members of the Quorum of the Twelve Apostles comment about the source of President Oaks’s inspiration when it comes to his talks:

“He has a soft heart,” said Elder Dieter F. Uchtdorf. But once he feels he has received divine direction on a talk topic, he goes forward without fear of how others in the world might feel. “On ideas that he believes in, he is very determined,” Elder Uchtdorf explained. Elder [Neil L.] Andersen agreed, saying, “He’s very serious about revelation, and when he gets it, he’s not heavily influenced by other people.” President M. Russell Ballard observed, “He’s got a happy heart, a happy disposition. And at the same time he can be very, very serious when the issues require it.” “He is fearless, absolutely fearless,” said Elder [David A.] Bednar. “He draws a lot of fire . . . , but he couldn’t care less. All he wants to do is please Him whom he serves.”

► You may also like: Nearly 37 years ago, President Oaks was called as an Apostle. Here's the behind-the-scenes story of that life-changing moment

Hearing other Apostles share that President Oaks follows divine direction on his talks, regardless of subject, made his April 2021 general conference talk even more powerful for me, and I think the response that others had to the talk shows the impact it had.

My deepened testimony of the inspiration behind conference talks has changed the way I study the most recent general conference messages. I think often about how “Heavenly Father cares about every word” and about how our leaders are “very serious about revelation.”

As I have studied Elder Uchtdorf’s talk “God among Us,” there was one insight I gained that I may have missed had I not been thinking about the importance of every word. Frequently, general conference talks have subheadings added to the printed texts that aren’t included as part of the spoken conference message. One of the subheadings in Elder Uchtdorf’s talk is a question: “What Shall We Do?”

In a footnote attached to the subheading, Elder Uchtdorf shared:

This was the question the multitude asked Jesus on the banks of the Sea of Galilee. It is a starting question for us as we contemplate becoming disciples of Jesus Christ. (See John 6:28.)

When I read this footnote, I had an interesting realization—even the subheadings of a conference talk can have inspiration behind them. When the multitude asks Jesus “What shall we do?” on the Sea of Galilee, He answers them by saying, “This is the work of God, that ye believe on him whom he hath sent” (John 6:29).

In this section of his talk, Elder Uchtdorf said, “As we seek to follow Jesus Christ and walk the path of discipleship, line upon line, the day will come that we will experience that unimaginable gift of receiving a fulness of joy.”

As we ask, “What shall we do?” and as we truly become disciples of Jesus Christ, that gift can be ours. God will not only be among us, but we can feel His presence there, filling us with joy.