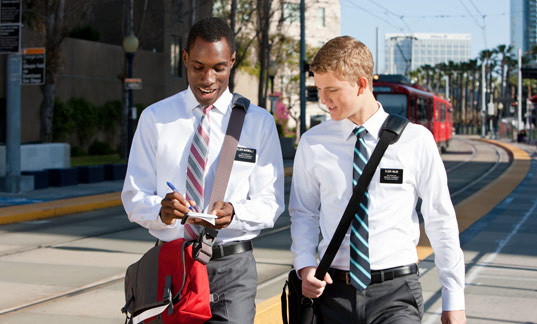 There was the sound of ripping paper, a well-timed drumroll, and then a pause.

It was a classic missionary call opening, complete with family and friends waiting anxiously for the answer to the question: where will you be serving?

Standing behind a camera, Dawn Armstrong put into words what most Mormon moms feel at this moment: "My heart is beating out of my chest like it's a wrestling match."

After a moment, her son Andrew finishes ripping through the big, white envelope and begins to read the piece of paper that will tell him where he will be spending the next two years.

"Dear Elder Armstrong, you are hereby called to serve as a missionary for The Church of Jesus Christ of Latter-day Saints," he says. "You are assigned to labor in the Washington D.C. South Mission."

Nearly drowning out Andrew's voice, all of his family and friends immediately erupt in cheers.

It was clearly a special moment for everyone involved, but as Dawn pointed out in a recent blog post, it isn't always so.

Dawn writes that missionaries don't always receive positive responses from family and friends when they find out they are serving "stateside."

In her blog, Dawn shared the story of her friend's daughter when she was called to serve in North Carolina.

"By the end of the night, something that had been a very joyful and sacred moment for her in the beginning – turned into a three-hour sob session, where her pillow was drenched in tears," Dawn writes. "Not tears of her own disappointment, but the disappointment of others. She was made to feel that her offering to the Lord just didn’t measure up. It took a little time for her to block out their words out of her mind and become centered in her own feelings again."

With all seriousness, he looked me right in the eyes and said it wasn't easy. No mission is "easy." His comment was abrupt, but it changed the way I viewed missionary calls.

I found that I had a lot of anxiety right before my sister received her call. I worried if she was called stateside, some might not think it was "a real mission," as Dawn writes on her blog, and make some sort of comment that would offend my sister. I should not have felt that way, but I did. When my sister read her call, however, everyone was excited for her. There was no "hard mission" vs. "easy mission" comments.

And it was amazing to see that the "hard mission," "easy mission" mentality was nowhere to be found in Andrew's mission call opening either.

The Lord calls missionaries were they need to go, shouldn't that be enough?

As Dawn writes on her blog, "So I say this to you missionaries – BE DANG PROUD! Your contribution is irreplaceable. The work is just as sacred no matter where you go. You WILL have a foreign experience, no matter what. It will be different than how you grew up, what you have witnessed, etc. God’s gonna use your good heart for his sacred work. You’ve worked so hard to be here, and I am SO PROUD OF YOU. Shout your call out proudly. You’ve earned it."

God never promised a perfect life, that's not our mission here. BUT hold out for those perfect moments... they are so beautiful! We are so thrilled for @andrewarmstrong5 's decision to serve the Lord! The second he read those words a flight of calm came over my heart. It's perfect. A completely different culture to fall in love with, he's leaving exactly when he wanted to, and he's going where he promised. Washington DC South...Take care of my baby! We'll be picking him up on the 4th of July 2019!!! How cool is that!? Capital of our Nation on Independence Day, I'll take it! 🇺🇸 #convertthedonald