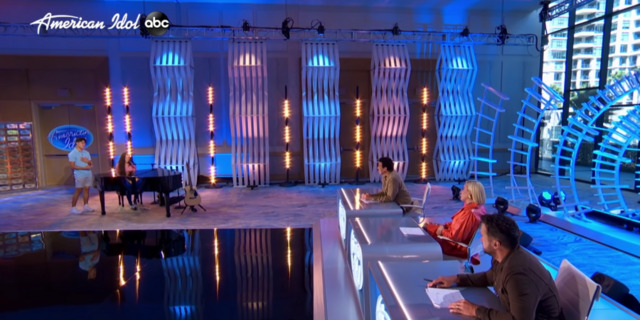 As the 19th season of American Idol begins, the show once again includes contestants who are members of The Church of Jesus Christ of Latter-day Saints. Here are a few contestants to look for as the show enters into Hollywood Week.

When Liahona and Ammon Olayan’s audition for American Idol aired on February 21, 2021, viewers instantly had a few cues about whether these two were members of The Church of Jesus Christ of Latter-day Saints: their names both appear in the Book of Mormon and they are the oldest of eight siblings.

A quick Google search may have even led some viewers to music the siblings have performed for the Church’s youth albums. Liahona performed “Good Day,” on the 2020 Youth Album, and Ammon is featured on the 2021 Youth Album in the song “I Am a Son of God.” The two took the stage together at the 2020 Youth Music Festival, singing “What Does He Think.”

The siblings, who are just a year apart in age, performed an original song for their audition, “Listen to My Heart.”

“We wrote this because we tend to get in fights a lot, especially with a lot of siblings,” Liahona explains. “Sometimes you say things that you don’t mean.

All three judges praise the performance by 17-year-old Ammon and 16-year-old Liahona.

“Liahona, you have a voice like we could write a song, record it, and it’s ready for the radio,” Luke Bryan says.

The judges then deliver the news that the two are headed to Hollywood. Their audition video now has over 1.4 million views.

For Liahona, the best part of the audition was being able to perform with her brother.

“He was my inspiration and has always been,” Liahona told Deseret News. “Being on ‘American Idol,’ it’s still crazy to process, but you know after everything that we’ve been through, it’s just like a dream come true.”

Read more about the siblings at Deseret News.

Abby LeBaron from Springville, Utah, performed “All I Want” by Kodaline for her audition that aired on March 7, 2021. Prior to her performance, 19-year-old LeBaron shares that she works in social media management, and even though she helps others build their social media following, she doesn’t have that large of a following of her own, explaining that she doesn’t want to show off.

The coaches, however, encourage her to show off and be bold.

“You’ve got the talent,” Perry tells LeBaron. “You need to work on believing in yourself.”

The judges unanimously decide to send LeBaron to Hollywood.

A Deseret News article shared that growing up, LeBaron didn’t perform very often. She was part of the Utah Valley Children’s Choir, performed at a high school band concert, and performed at her senior prom.

“I regret not sharing it as much as I could have,” Lebaron told Deseret News. “(But in high school), nothing is off-limits to joke about, so you kind of have to learn how to let stuff roll off your back sometimes. Singing was one thing that I couldn’t handle jokes about because that was something that was really important to me. . . . I just didn’t want to feel uncomfortable about that, so I didn’t really share it that much.”

Eighteen-year-old Benson Boone started singing just a year ago when his best friend told him they should start a band and told Boone he should sing. Boone is well-known on TikTok with over 1.4 million followers.

Boone from Monroe, Washington sings “Punchline” by Aidan Martin for his audition.

His audition now has close to 1.6 million views. The judges praise his performance and Lionel Richie calls it natural talent. Perry even says, “I see you winning American Idol if you want to.” The judges send him onto Hollywood.

“I have just opened the door to my future and I’m ready to go get ‘em,” Boone says.

Sade Frame’s American Idol audition is one that wasn’t included in the episodes, but she shared that she got a golden ticket on her Instagram page.

“I’m so grateful to be able to have this insane experience,” Frame wrote on Instagram. “Not only was it amazing to audition in front of Katy Perry, Lionel Richie, and Luke Bryan—but it was also epic to be surrounded by kids with the same passion for music as me! My little sis Ivy and I even sang a duet in front of the judges—and she got a golden ticket too! I appreciate all the love I’ve received from many of you guys—on to Hollywood!”

Frame is a 16-year-old singer/songwriter and frequently shares her music on Instagram.

Husband and wife Grayson and Lizzy O’Very are also among auditions that weren’t shown in the episodes. Both of them also received a golden ticket according to a post on Lizzy’s Instagram.

“Lemme tell ya, it was something crazy!! I wouldn’t have been able to do ANY of it without @graysonovery by my side,” Lizzy wrote on Instagram.

The couple lives in Utah.

Cross Mathis is also among the contestants whose auditions didn’t air on the show. The South Carolina native received a golden ticket and moved on to Hollywood week.

“I got a Golden Ticket! Although, my audition wasn’t aired on the show I was very blessed to be able to sing for the judges on @americanidol and I’m humbled and grateful for @lukebryan @katyperry @lionelrichie for seeing something in me and giving me a shot!”

On Instagram, Cross posted that he dedicated his golden ticket to his best friend who had passed away.

“He was with me every step of the way,” Cross wrote of his friend.

This article was updated on March 22, 2021, to include Cross Mathis and on March 17, 2021, to include Benson Boone, Sade Frame, and Grayson and Lizzy O’Very. Do you know of other Latter-day Saint contestants on this season of American Idol? Let us know at storytips@ldsliving.com.