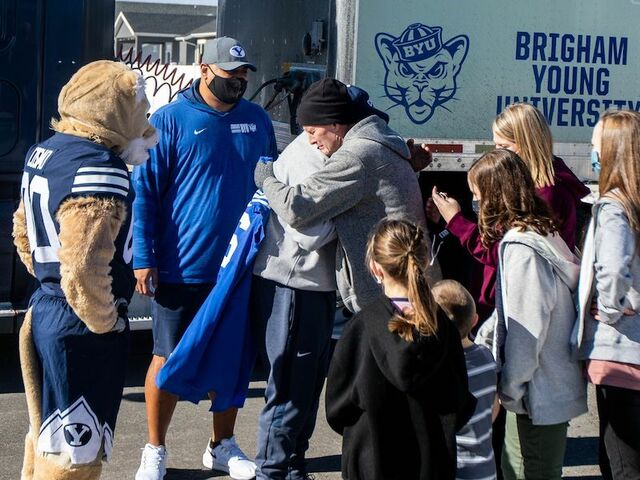 This former bishop wanted to ride in BYU football’s truck before cancer takes his life. Here’s who made that happen

Brandon Stewart had the ride of a lifetime over the weekend. After many brain surgeries and cancer treatments, Stewart, age 44, learned in December 2020 that he doesn’t have long to live. So when his wife asked if there was something special he’d like to do with his remaining time, he responded that he’d like to ride in Brigham Young University’s football equipment truck.

Stewart recently served as a bishop for his congregation in Clinton, Utah. He retired with the rank of major from the National Guard in 2019. His military service included serving a one-year deployment in Iraq from 2004 to 2005, Deseret News reported. Additionally, Stewart has an educational and professional background in mechanics and manufacturing engineering, so a ride in the BYU football truck would be right up his alley.

When doctors told Brandon Stewart he only had a few days left, his family started talking to him about his final wishes. Since he’s a big @BYUfootball fan, he had one in mind. On Saturday that wish came true. Here’s our story for @KSL5TV. #ksltv #byu https://t.co/d33Rl7hp4B pic.twitter.com/nzBlZWeO0j— Alex Cabrero (@KSL_AlexCabrero) January 31, 2021

A few strings were pulled, and on Saturday, January 30, friends and neighbors held up posters and waved BYU flags on the street as Stewart rode by with his wife and four children in the semitruck with the “Y” logo on its side. BYU football head coach Kalani Sitake and Cosmo the Cougar also made a surprise appearance. Sitake told the Deseret News that it was important to honor Stewart and expressed gratitude for the service he’s given his church and country.

“We’re like a lot of other teams. You want to do service and help other people. It’s a big reason why I love being a coach,” Sitake said. “Brandon is a year younger than I am. You get emotional thinking about it—him and his family, the service he’s given, the things he’s done as a bishop, and his service for us in the military. So I thought it was important that we could be here and I know that it would mean a lot to the community, so I just want to honor him.”

Read more about Stewart and his experience last weekend at Deseret News.

Byu FootballByu Football,
Comments and feedback can be sent to feedback@ldsliving.com