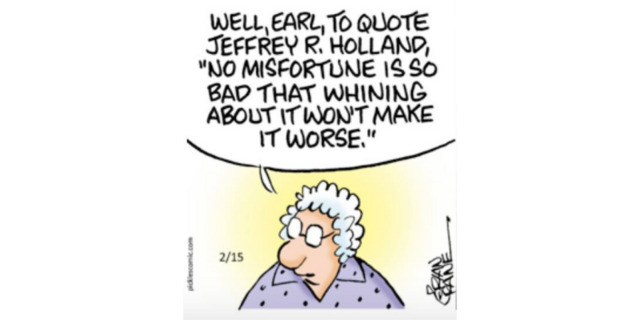 In April 2020, the national comic strip Pickles featured a quote from Elder David A. Bednar. And in February 2021, timeless advice from Elder Jeffrey R. Holland has been included in the comic strip.

In the February 15, 2021 comic strip, husband and wife Earl and Opal are having a conversation.

The quote comes from Elder Holland’s April 2007 conference talk, “The Tongue of Angels,” where he shared:

We should honor the Savior’s declaration to “be of good cheer” (Indeed, it seems to me we may be more guilty of breaking that commandment than almost any other!) Speak hopefully. Speak encouragingly, including about yourself. Try not to complain and moan incessantly. As someone once said, “Even in the golden age of civilization someone undoubtedly grumbled that everything looked too yellow.”

I have often thought that Nephi’s being bound with cords and beaten by rods must have been more tolerable to him than listening to Laman and Lemuel’s constant murmuring. Surely he must have said at least once, “Hit me one more time. I can still hear you.” Yes, life has its problems, and yes, there are negative things to face, but please accept one of Elder Holland’s maxims for living—no misfortune is so bad that whining about it won’t make it worse.

It seems Opal may have adopted one of Elder Holland’s maxims for living too.

The artist behind the Pickles comic strip, Brian Crane, is a member of The Church of Jesus Christ of Latter-day Saints.

In 2013, Crane told Deseret News he created Earl and Opal and the rest of the Pickles crew as characters with strong family values.

Other Latter-day Saint references in the comic strip include a temple in a picture frame and a copy of the Ensign.

Learn more about how artist Brian Crane draws on life, marriage, and aging to create his award-winning comic strip at Deseret News.