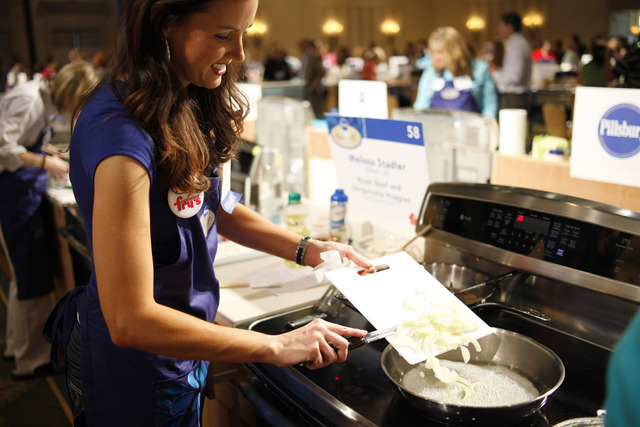 Udated: Two other LDS women, Kalani Allred of Loomis, Calif., and Juliann Pelton of Katy, Texas, are also semifinalists in the Pillsbury Bake-off®: Allred for her Balsamic Chicken Cranberry Panzanella, and Pelton for her Spicy Chicken Pizza Roll.

Growing up in a family of five brothers, she certainly knew about sports but wasn’t involved in them. Piano came to her all right but wasn’t fully in tune. She tried dance club, but it didn’t quite jive.

Then she prayed. And soon cooked.

It started as a teenager, with just with making cookies for choice male friends. Then she decided to add in her own spices—only for that to lead to formulating recipes of her own.

Then came, well, the kitchen sink.

“I remember getting into cooking in my tiny apartment kitchen and trying to make elaborate meals for my new husband—and enjoying it,” Stadler said. “I found that I really loved to cook. I found a lot of satisfaction in cooking for my family and friends.” Oh, how she has since cooked.

Most recently, Stadler has been showcased for her abilities by being named a semifinalist—again—in the 46th Pillsbury Bake-off® Contest. This time, the 46th annual event requires that the public vote online to send finalists to the event’s final stage in November in Las Vegas. Votes can be cast at pillsbury.com.

“It’s truly been on the top of my bucket list [participating in the Pillsbury Bake-off® Contest]. But I knew I needed to hone my skills,” said Stadler, a mother of four living in San Antonio, Texas. Through tears, she added: “I totally thank my Heavenly Father for helping me figure out my passion, because it took a long time.”

At least not long enough to keep her from having already attained numerous notorious marks in culinary arts, including a previous finalist ranking in the high-profile event. Stadler traveled to Orlando, Fla., in 2010 to participate in the company’s 44th competition. All was well there for the mother of four—at least, until her Roast Beef and Gorgonzola Hoagies began to flame in the oven provided her. Defending her dish before a Philadelphia reporter demanding to know the difference between the hoagie and a Philly cheesesteak, Stadler got distracted. The sandwich transformed from broiled to crispy.

“That was traumatic,” she said. “I knew I needed to give it another shot.” After applying last year (gluten-free recipes compatible with her diet at the time didn’t work), Stadler’s Chorizo Potato Puffy Tacos (seen below) have once again hit the spot with judges.

They sifted the applicants from tens of thousands to 60 each in three categories: breakfast, dinner and dessert. Since the public can choose only 34 recipes in the dessert and 33 in the two former categories, Stadler hopes that enthusiasm for the regional favorite will translate into an ample amount of online votes from members of Texas communities.

She certainly wasn’t soured by those especially parochial to her welcoming the dish. With in-laws, neighbors and her two daughters and sons all gobbling up the free treat, Stadler knew she had found a dish that could amount to something much more.

Stadler’s conviction that she was “on to something” as she completed a second batch that night caused her not even to make a second version of the recipe. “I submitted as is,” she said. “I got lucky.”

She’s had a lot of that recently. Aside from her advancements on the Pillsbury stages, the Mesa, Ariz., native also won the opportunity to be filmed in June 2011 on the Food Network studies. Her "I Want to Marry You" Cookies—the recipe that impressed the cable channel (and yes, it was the go-to treat for her choice male friends)—also topped The Cooking Channel’s “10 Most Popular Recipes of 2012” list.

“That was a surprise I never was imagining would happen,” Stadler said. “That’s the power of Pinterest: it getting passed along.”

Now she needs that online advantage to return to the same Pillsbury stage as three years earlier, where she will once again welcome a spotlight to shine on her faith. At the 2010 Bake-off®, Stadler didn't drink at a cocktail party, and a woman who had left the Church took note, and the two became friends. Another bond occurred at the gala when she prayed minutes before the judging began with a devout Christian from Norman, Okla., who had a booth next to hers.

Those relationships continue today. In fact, just a few hours before she was interviewed for this story, Stadler had finished communicating with the latter over Instagram about a Bible study conducted in the Sooner state.

“She told me that her husband voted for me,” she said. “She’s been a great cheerleader and friend. It’s neat to have that type of relationship with someone with whom we’ve bonded through our spiritual beliefs.”

But discussions of a burning in the bosom—a conversation that has ensued in the past between different religious groups—can stay in the kitchen, perhaps concerning other items burning, like Roast Beef and Gorgonzola Hoagies.

Not that religious zeal can’t be a factor in the Bake-off®.

“It’s like this iconic competition, like the Holy Grail,” she said. “At first, I just thought it was such a cool title.”

That certainly changed—just as her pursuits of her talents did. Stadler is grateful for the oven in which hers cooked.

Eventually, done just right—quite unlike those hoagies, and needing quite longer than just the two minutes the sandwiches required.

“My family showed their love through food,” she said. “There, I found my passion: in the kitchen.”