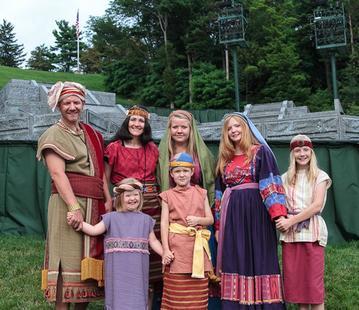 A Mormon father who works in the theater industry near Times Square brought his family to Palmyra so they could participate in the annual Hill Cumorah Pageant.

Erik Orton, 39, from New York City, is a writer, director and producer working near Times Square. In 2009, he won an Emmy Award for his Off-Off Broadway original musical Berlin. But this year, just like last, Orton and his family of seven will be participating in a large outdoor production in upstate New York.

“I had no interest in doing (the) pageant whatsoever,” Orton said. “The only reason I did it was because of my kids. I was miserable the first week, but by the time we did the initial run-through, I had a change of heart and realized that there’s something here."