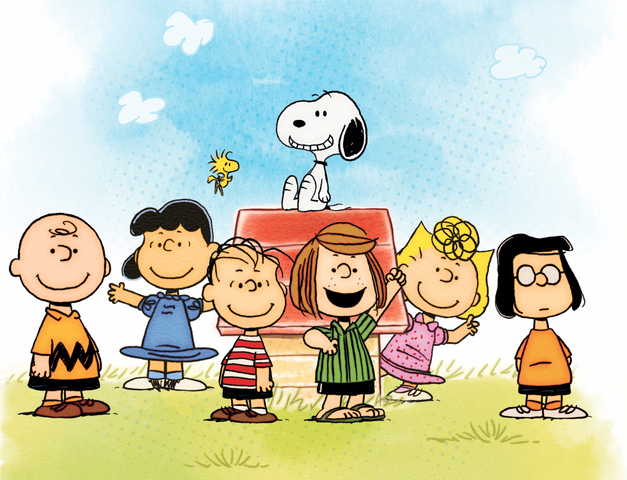 Everyone has their favorite TV show, but would you expect one of yours to be mentioned in a general conference talk?

Over the years, prophets and apostles have mentioned TV shows as part of their general conference addresses, ranging from cartoons to old Westerns to talk shows.

Here are five TV shows that have been referenced in general conference and the valuable lessons Church leaders shared by mentioning these programs. 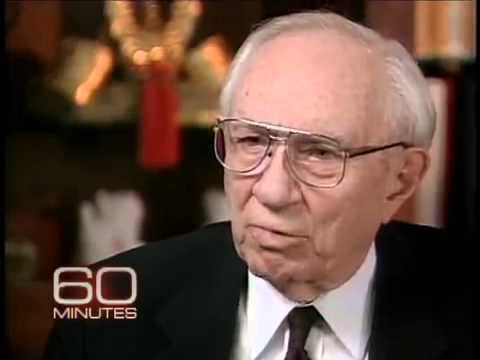 In 1996, President Hinckley made an unprecedented appearance on national TV when Mike Wallace interviewed him on 60 Minutes.

It was the first time a prophet of the Church had been interviewed on live TV, let alone by one of the most well-known reporters of all time and on one of the most-watched programs on television.

While on the show, President Hinckley responded to Wallace's questions with his characteristic wit and straightforwardness, even when faced with the "tough, streetwise reporter with long experience." But President Hinckley felt it important to meet with and discuss Church topics with Wallace, whom Hinckley called a "gentleman in the best sense of the word."

"We have something that this world needs to hear about, and these interviews afford an opportunity to give voice to that," President Hinckley said in his October 1996 general conference address "This Thing Was Not Done in a Corner."

And because of this interview on national TV, President Hinckley shared in general conference portions of the interview, including parts that didn't air on the show. These exchanges included multiple questions and answers that members might be faced with and could find invaluable when answering questions about the Church, like the following exchange President Hinckley had with Mike Wallace:

"Mr. Wallace: 'How do you view non-Mormons?'

"Response: 'With love and respect. I have many non-Mormon friends. I respect them. I have the greatest of admiration for them.'

"Question: 'Despite the fact that they haven’t really seen the light yet?'

"Reply: 'Yes. To anybody who is not of this Church, I say we recognize all of the virtues and the good that you have. Bring it with you and see if we might add to it'" (President Gordon B. Hinckley, "This Thing Was Not Done in a Corner," October 1996 general conference).

Would you have ever guessed Elder Quentin L. Cook is a fan of the cartoon TV show Peanuts and even mentioned it in one of his conference talks?

Elder Cook became familiar with the fictional rag-tag band of children and a lovable, mischievous dog named Snoopy while his law firm did legal work for the Charlie Brown holiday TV specials. And in the October 2014 general conference, he even shared a valuable lesson from this iconic cartoon and comic.

"One of my favorite comic strips involved Lucy. As I remember it, Charlie Brown’s baseball team was in an important game—Lucy was playing right field, and a high fly ball was hit to her. The bases were loaded, and it was the last of the ninth inning. If Lucy caught the ball, her team would win. If Lucy dropped the ball, the other team would win" (Elder Quentin L. Cook, "Choose Wisely," October 2014 general conference).

"This was one of many fly balls Lucy dropped through the years, and she had a new excuse each time. While always humorous, Lucy’s excuses were rationalizations; they were untrue reasons for her failure to catch the ball.

"During the ministry of President Thomas S. Monson, he has often taught that decisions determine destiny. In that spirit my counsel tonight is to rise above any rationalizations that prevent us from making righteous decisions, especially with respect to serving Jesus Christ. In Isaiah we are taught we must 'refuse the evil, and choose the good'" (Elder Quentin L. Cook, "Choose Wisely," October 2014 general conference).

Elder Cook shared a time when he and Merlin, both sought-after high school football players, were both invited to a lunch with the Standford football coach. Though he knew his father's counsel was not to play intercollegiate football and, instead, focus on his studies, Elder Cook could not refuse such an offer.

But things didn't go the way he expected, and he shares another important lesson of choosing wisely.

"The lunch with the Stanford coach was at the Bluebird restaurant in Logan, Utah. After we shook hands, he never once made eye contact with me. He talked directly to Merlin but ignored me. At the end of the lunch, for the first time, he turned toward me, but he could not remember my name. He then informed Merlin, “If you choose Stanford and want to bring your friend with you, he has good enough grades and it could probably be arranged.” This experience confirmed for me that I should follow my dad’s wise counsel" (Elder Quentin L. Cook, "Choose Wisely," October 2014 general conference). 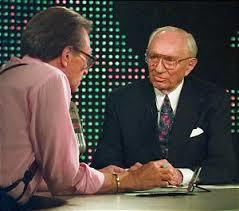 In an October 1988 general conference talk, "What Are People Asking about Us?" President Hinckley mentions his second appearance on a national television show and why he agreed to be interviewed by King.

"I consented to do so because I felt that while there were possible hazards in it, there also was a great opportunity to speak to the world on issues before us," President Hinckley said in his conference talk.

Answering questions like the one below, President Hinckley shed light on some of the things many might not know about the Church or its leaders. But it also sparked President Hinckley's conference talk and powerful answers to other questions Church members might have.

"In the course of the show Mr. King asked me point-blank, 'What is your role? You’re the leader of a major religion. What’s your role?'

"This reply was extemporaneous. I never expected that question. But in the spirit of that response I have thought this morning that I would like to raise a half-dozen or so questions we are invariably asked by those of the media and other churches. For this occasion I must be necessarily brief. Every one of these issues is worthy of a full discourse" (President Gordon B. Hinckley, "What Are People Asking about Us?" October 1998 general conference).

In his talk, President Hinckley gives brief answers to seven questions members may come across, including "What is the Mormon doctrine of Deity, of God?" "What is your Church’s attitude toward homosexuality?" and "What is the Church’s position on polygamy?"

Though President Hinckley acknowledged these questions certainly did not cover every inquiry nonmembers may have about the Church, they do help outline our beliefs when it comes to difficult questions members may face.

"We have to know this, you and I who subscribe to the doctrines of this Church, that this is God’s work, directed by the Lord Jesus Christ, that it operates according to Their plan and Their pattern, and that it carries with it Their blessings," President Hinckley said. 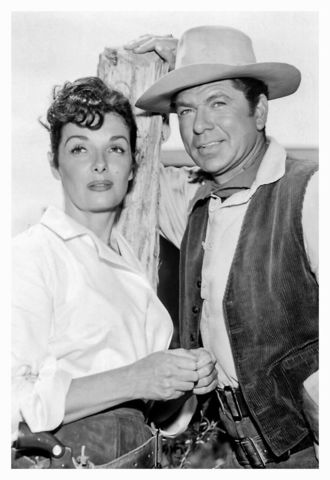 Did you know a radio and television program once told the true story of a Mormon family? The program Death Valley Days was even mentioned in a 1987 conference talk by President Thomas S. Monson.

In his talk, President Monson outlines the perseverance and faith of David Cannon and his family as they attempted to raise the $800 needed to purchase glass for the St. George Tabernacle. So far, the glass had been carefully transported from the East to New York, and then to San Bernardino, California, but they had to purchase the glass in California before they could finish the trip to St. George, Utah.

Though the family pulled together all the money they had and received additional donations from their community, they only raised $200. Even after all their work, the $800 needed for the glass seemed like an impossible sum.

However, a miracle was in the works for this LDS family they would never forget:

"David Cannon sighed the sigh of despair of one who had failed although he had tried his best. The little family was really too weary to sleep and too discouraged to eat, so they prayed. Morning dawned. There gathered the teamsters with their wagons and teams, prepared to undertake the long journey to San Bernardino. But they had no $600.

"Then there came a knock at the door, and Peter Nielsen, from the nearby community of Washington, entered the house. He said to David Cannon, 'Brother David, I have had a persistent dream that I should bring the money that I had saved to expand my house—bring it to you, that you would have a purpose for it.'

"While all of the men gathered around the table, including little David, Jr., Peter Nielsen took out a red bandanna and dropped gold pieces, one by one, upon the table. When David Cannon counted the gold pieces, they totaled $600—the exact amount needed to obtain the glass. Within an hour the men waved good-bye and, with their teams, set forth on their journey to San Bernardino to retrieve the glass for the tabernacle.

"When that true story was told on 'Death Valley Days,' young David Cannon, Jr., was then eighty-seven years of age. He listened to the story with rapt attention. I feel that in his mind, he once again heard those gold pieces, one by one, dropping upon the table as astonished men saw with their very eyes the answer to their prayers"  (President Thomas S. Monson, "Tears, Trials, Trust, Testimony," April 1987 general conference).

Though it seemed impossible to raise so much money, as the Cannon family did all they could, they were blessed. As President Monson later went on to say:

"If any brethren within the sound of my voice feel unprepared, even incapable of responding to a call to serve, to sacrifice, to bless the lives of others, remember the truth: “Whom God calls, God qualifies.” He who notes the sparrow’s fall will not abandon the servant’s need" (President Thomas S. Monson, "Tears, Trials, Trust, Testimony," April 1987 general conference). 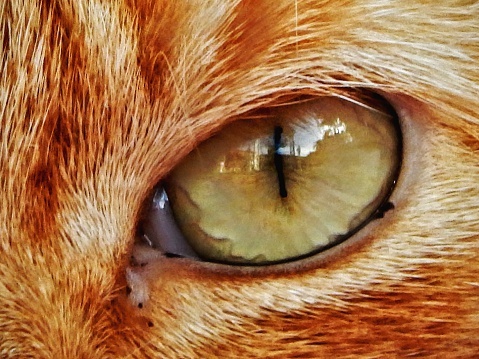 Sometimes it takes stepping back and looking at the whole picture to understand all its parts, as Elder Rafael E. Pino shared in his April 2015 general conference talk.

When Elder Pino's children were younger, they would watch a TV program called What Do You See? It would begin by showing a picture of something up close, making it very difficult to guess what it was at first glance. But slowly, more and more of the picture would be revealed until the full image came into view. The program would use close-up pictures of cats, fruits, plants, etc. for the children to try to guess what the whole picture was going to be.

In his general conference address, Elder Pino illustrated how important this skill can be when living the gospel:

"I remember that on one occasion they were watching that program and it showed something very close up that looked very ugly to them, even repulsive; but as the image widened, they realized that it was a very appetizing pizza. Then they said to me, 'Daddy, buy us one just like that!' After they understood what it was, something that at first had looked unpleasant to them ended up being something very attractive. . . .

"This is one way of contemplating the Lord’s plan. We do not have to concern ourselves with each of its parts separately but rather to try to bring the entire picture into focus, keeping in mind what the final result will be. The Lord knows where each piece belongs so that it fits into the plan. All the commandments are of eternal importance in the context of the great plan of happiness" (Elder Rafael E. Pino, "The Eternal Perspective," April 2015).