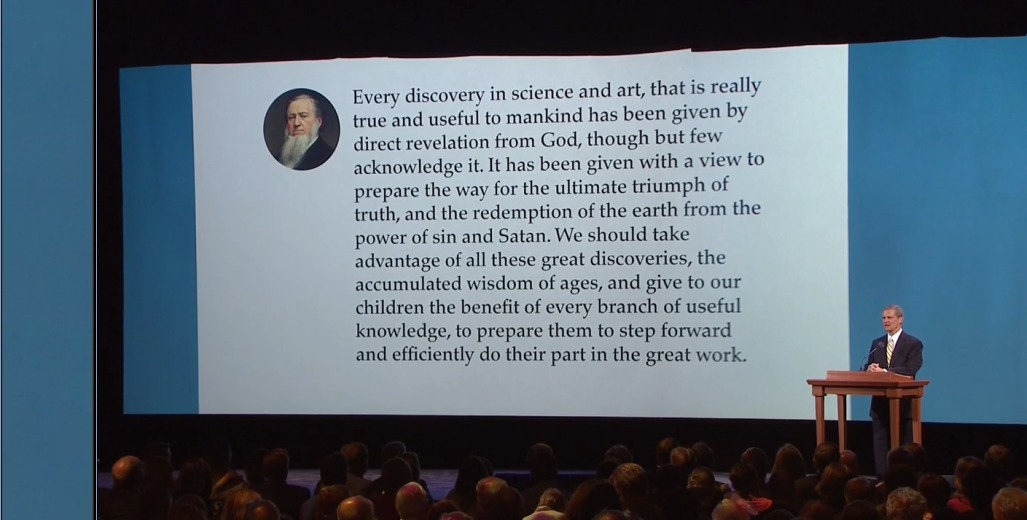 On Tuesday, August 19, 2014, Elder David A. Bednar spoke in a devotional at BYU as part of Education Week. His topic was social media use and it added on to a talk he gave in 2009 titled "Things as They Really Are."

He addressed the ways that the dispensation we live in is so unique, bursting with many inspired technological and communication devices that can be powerfully used to spread the gospel and the work of salvation.

He also shared six examples of ways gospel messages have recently had an impact thanks to social media channels:

- The way many members of the First Presidency and Quorum of the Twelve are beginning to be personally involved with social media accounts on sites like Instagram and Twitter.

- The growth of the LDSConf hashtag, which was originally started in 2008 by a faithful member.

- The sixth example turned out to be an exciting announcement about a new film called Meet the Mormons. The film was originally meant to be shown only in the Legacy Theater in the Joseph Smith Memorial Building, but now will have worldwide distribution through various available digital channels. It will be released in select theaters in the United States soon after October general conference, but will later be shown in visitor's centers, on television, and through internet movie and social media channels. Watch the trailer for the film that debuted during the talk by clicking here.

Throughout his talk, Elder Bednar used many forms of media, including a slideshow and several old clips of past conference talks from prophets such as Gordon B. Hinckley and David O. McKay.

He even projected some basic social media guidelines on a screen behind him:

1. Be authentic and consistent. Be truthful, honest and accurate online.  Our content on social media should be uplifting and constructive, showing we are disciples of Christ.

2. Edify and Uplift. Don't argue, debate, condemn, or belittle. Share the gospel with genuine love and concern, even if you are bold in defending your beliefs. We should use social media channels to project the light and truth of the restored gospel into a dark and confused world.

3. Respect Intellectual Property. Don't create your own content using someone else's art, name, photos, music, video, or other content without permission. Another big announcement was made at this point: "The content in Media Library on LDS.org, unless otherwise indicated, has been cleared for use by members without seeking permission from the Church." Go so social.lds.org for more info.

4. Be Wise and Vigilant. The most memorable line from this section? The internet never forgets. He reminds members that no matter what the app or program says, something posted on the internet will be there forever, so be wise with what you post.

At the end of his talk, Elder Bednar also issued a challenge for members. He said that we have accomplished only a trickle of missionary work on Social Media right now. He said "Beginning at this place on this day, I exhort you to sweep the earth with messages filled with righteousness and truth—messages that are authentic, edifying, and praiseworthy—and literally sweep the earth as with a flood.

He concluded by reminding us that we don't need to become social media fanatics or spend hours composing messages, but each of us can contribute consistently to the growing flood of truth and righteousness as the work continues to hasten.