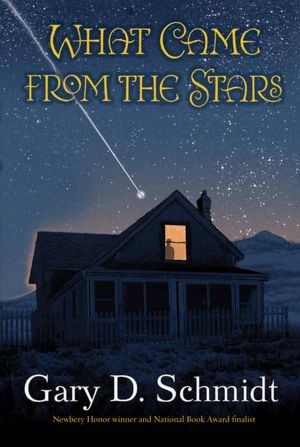 This book is a look inside East Turkestan that has recently been taken over by Chinese rule. A young Uyghur girl is dealing with the oppression that is taking over,  and her family fears they may lose their farm. She sets out for the market where she hopes to sell enough peaches to help her family, but a tourist sees her unusual vine basket. And this stranger brings hope to her little life. The story is written so well that you are constantly pulling and hoping for the best for this girl – and her people!

This mystery is another sophisticated storyline that will keep you guessing to the end. Eleven-year-old Early lives meagerly with her little brother and parents in a one-room apartment in Chicago. But when her father, who works at the library, suddenly goes missing, and there’s a break-in at the apartment, Early and her family have to move to a homeless shelter. But Early is determined to find her father and proceeds to begin to solve this highly technical mystery.

What Came From the Stars

This book is a mixture of science fiction, fantasy and realistic fiction. A distant planet is fighting the evil forces, and in an attempt to save their most valuable possession, a glowing necklace, they throw it into space. This magical chain lands in sixth-grader Tommy's lunchbox. He proceeds to put it on and that's when amazing things begin to happen. For instance, when he begins to draw a picturesque scene of a river, the water actually flows. He finds that he has new knowledge about another planet including words that are completely foreign to him. But now a big problem exists for him: the evil forces have come to earth to reclaim this necklace.

These are wonderful stories that read like classic fairy tales. The first book in this series begins with Christian being raised by a troll. He spies a beautiful maiden, Princess Marigold, across the river whom he instantly falls in love with. But she is already bequeathed to marry a nobleman. But when Christian learns that Marigold's life, as well as the kingdom, is in danger from the evil queen, he must save them all. The following two books in the series follow Christian and Marigold as they become king and queen against all odds.

Annie and Rew, live next to zebra forest—a place filled with dark and light trees--with their elderly Granny. Annie and her little brother have always been told that their father died in a fight and the man who fought with him is in prison. But everything is about to change when someone breaks into their home and everyone in that house is about to learn something they never knew. The story has language that seems to drip with eloquence off the pages and the action is non-stop!

Who Could That Be at This Hour? (All The Wrong Questions)

This prequel shocases a young Lemony as he begins his investigations by attempting to locate a priceless heirloom. As he travels with an experienced investigator, the reader begins to question who actually stole the heirloom, as well as the identity of the investigator. There is so much foreshadowing and red herrings that it reads like a sophisticated Sherlock Holmes mystery written for kids.

The Not Even Once Club

Illustrated in beautiful color, this LDS children’s picture book tells the story of a young boy named Tyler who, after moving, makes a new friend, Kyle, at church in Primary. Tyler wants to join a tree house club with his classmates, but first must make a solemn promise: he must do his best never to break the Word of Wisdom and other Church standards. Not even once.

In this continuation of the popular Janitors series, the Rebels must hide Spencer Zumbro from the Bureau of Educational Maintenance, and sneak him, along with Daisy, to supposed safety at New Forest Academy. But even there the battle with the intelligence-draining Toxites continues, now with more on the line as Spencer attempts to uncover the true secret of New Forest Academy.

In the year 2074, twins Abby and Derick enter Cragbridge Hall, a futuristic academy where students learn by hologram and simulation. When the founder of the school, Abby and Derick’s grandfather, goes missing, it’s up to them to piece together a trail of strange clues before a mysterious adversary can beat them to figuring out their grandfather’s greatest secret.