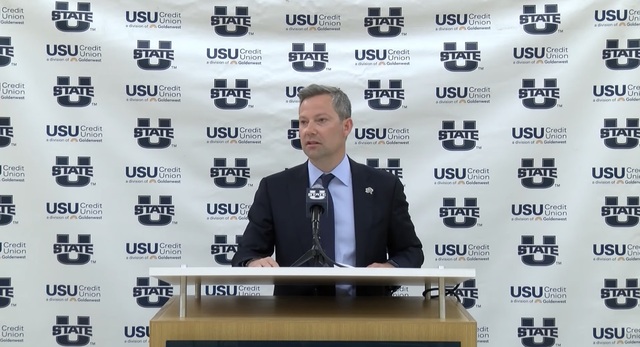 If you’re a fan of March Madness, you likely recognize the Utah State Aggies’ new men’s basketball coach, Ryan Odom. Odom and his former team, the University of Maryland, Baltimore County basketball team made noise in the 2018 NCAA tournament with their first-round upset of the top-seeded Virginia Cavaliers.

But now, Odom has a new opportunity ahead as he will coach the Utah State Aggies, a basketball team that has had great success in recent years. And so far the thing that has impressed him most about players on his future team is their maturity, maturity that he attributes at least in part to the fact that many of them served full-time missions and are therefore older than most college basketball players.

“The biggest thing I’ve learned about these guys is that there’s a maturity level that exists here that is extremely refreshing,” Odom told Deseret News. “There’s a maturity level here that doesn’t exist everywhere. And I’m really excited to coach these guys, I mean, you talk about Justin Bean, Brock Miller, Stephen Ashworth. And they’re not the only ones. When you sit in a room with them, it’s easy to tell that these are men.”

Of the players he mentioned, Bean served a full-time mission in Reno, Nevada; Miller served in Buenos Aires, Argentina; and Ashworth served in Indianapolis, Indiana.

While some may view the complexities of recruiting and coaching prospective missionaries or returning missionaries as a negative, Odom says he views it as a positive for his new squad.

“It’s just really impressive; it’s obviously a life-changing two years for them,” Odom noted. “If you go on a mission and do that for an extended period of time, you’re going to come back a better person and a more mature person. And I think Utah State and the basketball is the beneficiary of that, so I view that as an extreme positive for us.”