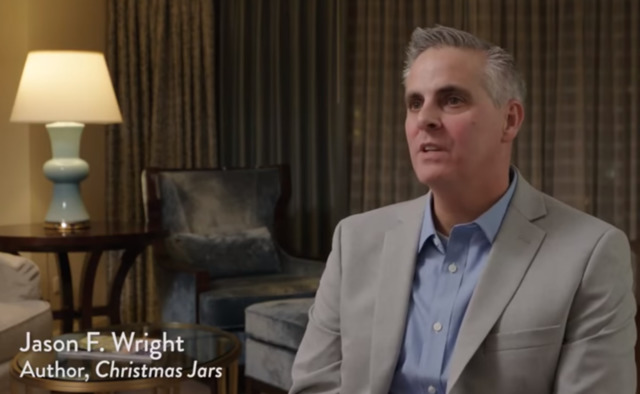 Jason F. Wright has captured the hearts and inspired the actions of many individuals and families through his book Christmas Jars, which has now been adapted into a movie. He tells the history behind the selfless Christmas jar tradition in a recently released video. The video gave a sneak peek into some of the bonus content on the new Christmas Jars DVD, which will be available on November 29 of this year.

In the video, Wright talks about how his altruistic father inspired him to start the Christmas jar tradition in his own family. The tradition came about when he and his family decided to put a glass jar on their counter one day, filling it with spare change every day until Christmas Eve and then giving the jar to someone else in need.

“We left this jar with less than $100 on someone’s porch and scampered off into the night, and it is not an exaggeration to say that we have never been the same since,” Wright shares in the video.

At the end of the video, Wright invites others to join in the Christmas jars tradition and to pray about someone to gift the jar to.

“I’m so grateful for this army of Christmas jar givers and receivers around the world who didn’t just believe in a little book or in the power of this movie that we are now enjoying, but they believed in the power of tradition and living your life a little bit more aware of people around you,” Wright concludes.

Lead Image Screenshot from the video above.