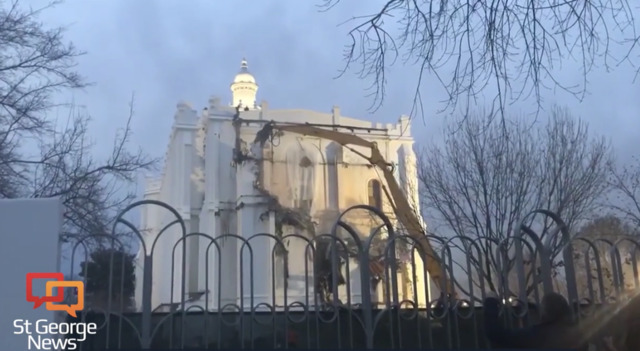 Demolition has begun on the back of the St. George Utah Temple.

According to St. George News, the portion of the temple being removed was part of an addition made in the 1970s. Many curious onlookers watched as heavy machinery exposed the original end of the temple—one of many steps being made to match the building’s unique historic architecture.

Other renovation plans for the St. George temple include temple landscaping, a new plaza, a new annex, and a new bride's exit (added to the east side of the annex). A baptistry entrance and exit will also be added to the south side of the temple.

Shortly after the St. George temple closure, the Church also announced the location of the Washington Utah Temple, which is currently planned to be three stories high and approximately 88,000 square feet.