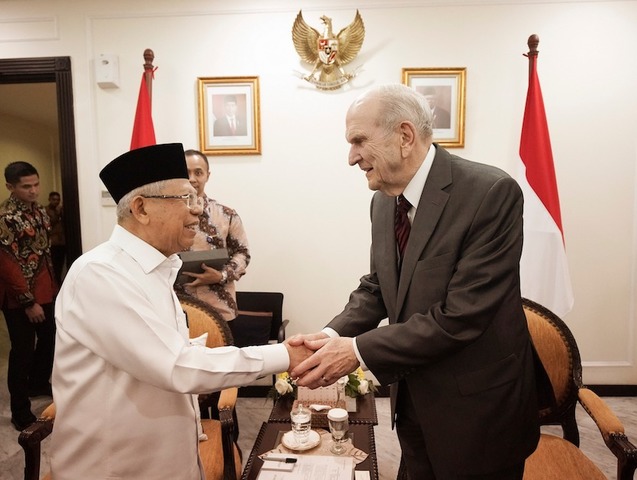 Video: How President Nelson's Ministry Is "About the People"

President Russell M. Nelson has been across the world during during his ministry as prophet of The Church of Jesus Christ of Latter-day Saints. Since his call in January 2018, he has visited 32 countries and territories. In the past 12 months alone, the prophet completed ministry visits in South America, Central America, the Pacific, and Southeast Asia. He has also mourned with and counseled Latter-day Saints across the United States, met with dignitaries, religious organizations, charities, and civic groups, and made a historic visit to Rome, Italy, to dedicate the temple.

A new Church News video takes a look at the work President Nelson has done as 2019 comes to a close and a new decade begins.

Take a look at more Church News videos that show a glimpse of President Nelson’s ministry this past year.

In January, President Nelson visited Paradise, California, after the deadliest wildfire in the state’s history. His visit came just days after his daughter died of cancer. Though grieving her loss, the prophet spoke of his desire to serve those in need.

“You learn that everybody has challenges and if you want to feel better, forget about yourself and serve somebody else,” he said.

With approximately 65,000 people in the audience, President Nelson spoke at the State Farm Stadium in Glendale, Arizona, in February. According to a Deseret News article, the prophet spoke about what it means to be a covenant keeper today.

"To be faithful to our temple covenants means we are willing to be different—much different—from men and women of the world," he said. "As covenant keepers, our thoughts, behavior, language, entertainment, fashion, grooming and time on the internet—to name a few things—are to be distinct from patterns and habits considered as normal by the world."

President Nelson, along with the First Presidency and the Quorum of the Twelve Apostles, traveled to the Rome Italy Temple for its March dedication. While there, President Nelson met with Pope Francis and talked about what is ahead for the Church.

“Things are going to move forward at an accelerated pace,” President Nelson said. “The Church is going to have an unprecedented future, unparalleled. We’re just building up to what’s ahead now.”

While in New Zealand, President Nelson met with Prime Minister Jacinda Ardern and gave a donation of $100,000 in behalf of the Church to the mosques attacked in Christchurch. During his visit to Tonga, President Nelson also met with His Majesty King Tupou VI and Her Majesty Queen Nanasipau’u in the Royal Palace.

“What God wants is for you to have immortality and eternal life,” President Nelson said in Hawaii. “I don't think it matters to Him what your occupation is. What matters to Him is what kind of a person you're going to be, not what you’re going to do.”

A Sanctuary of Faith

On June 9, President Nelson gave a devotional address to 15,500 Latter-day Saints in Orlando, Florida, at the Amway Center. During his talk, the prophet spoke of how Orlando might claim to be the happiest place on earth due to their theme parks and amusement parks, but in reality, the happiest place on earth is where the Spirit of the Lord dwells.

“It is inside any home that has become a sanctuary of faith and is filled with love. It is inside every House of the Lord,” said President Nelson. “It can be wherever you are when the Spirit of the Lord is with you.”

President Nelson also met with a delegation headed by Vietnam’s Committee for Religious Affairs (CRA) in June 2019. The delegation met with Church, government, religious, and academic leaders. According to Newsroom, the CRA has many responsibilities, including the “principal government agency for oversight and approval of all religious activities in Vietnam.”

Following the devastating Notre Dame Cathedral fire, President Nelson expressed in a letter to Pope Francis his "profound sadness at the damage done to this sacred structure that has stood for more than 800 years."

Additionally, President Nelson told the Bishop of Rome that his thoughts "immediately" went to him and friends of the Catholic faith, and that he prays "Notre Dame will rise again in newness of life."

Upon learning of the fire at Notre Dame Cathedral, I wrote @Pontifex Pope Francis to express that Latter-day Saints are remembering our Catholic brothers and sisters. We pray that Notre Dame will rise again in newness of life.— Russell M. Nelson (@NelsonRussellM) April 18, 2019

President Nelson was invited to attend the 110th annual convention of the National Association for the Advancement of Colored People on July 21 in Detroit. At the convention, President Nelson met with Rev. Amos C. Brown, pastor of the Third Baptist Church of San Francisco and Rev. Theresa Dear, NAACP vice chair of religious affairs.

“Arm in arm and shoulder to shoulder, may we strive to lift our brothers and sisters everywhere, in every way we can,” said President Nelson at the convention. “This world will never be the same.”

From August 24 to September 1, President Nelson visited Guatemala, Colombia, Ecuador, Argentina, and Brazil. On that visit, the prophet traveled 14,779 miles and met with a total of 344,452 people. President Nelson’s ministry to those nations took place shortly before his 95th birthday and he repeatedly encouraged Church members to follow the commandments during his stay.

“My advice today is very simple,” he said while in Guatemala. “Please keep the commandments of God. Remember to pray to him every morning and night. Pray with your families. Pray in private. Pray to our Heavenly Father in the name of Jesus Christ, through the power of the Holy Spirit. In doing so, he will direct you for good in everything you do.”

President Nelson met with Kiribati President Taneti Maamu and welcomed Cuba’s Ambassador Jose R. Cabanas to the U.S. in Salt Lake City in October 2019. President Maamu thanked the First Presidency for the Church’s humanitarian efforts in Kiribati, and Ambassador Cabanas “spoke about the importance of solidarity after natural disasters and the Church’s cooperation with social and community organizations in Cuba,” Newsroom reported.

In November, President Nelson met with His Excellency Dr. Mohammad Abdulkarim Al-Issa, secretary-general of the Muslim World League and president of the International Organization for Muslim Scholars, based in Mecca, Saudi Arabia. According to Newsroom, the First Presidency gave Dr. Al-Issa a medallion and a copy of “The Niche of Lights,” an ancient text by 11th century Islamic thinker Abu Hamid Muhammad al-Ghazali.

That same month, the prophet went on a ministry visit to Southeast Asia, stopping in Vietnam, Cambodia, Singapore, and Indonesia. On his visit, President Nelson met with government leaders and consistently told Latter-day Saints in the area that they are loved and that he is proud of those members who are the future of the Church there.

“So you are a new generation, empowered to carry forth the work of the Lord here in this country,” he said.