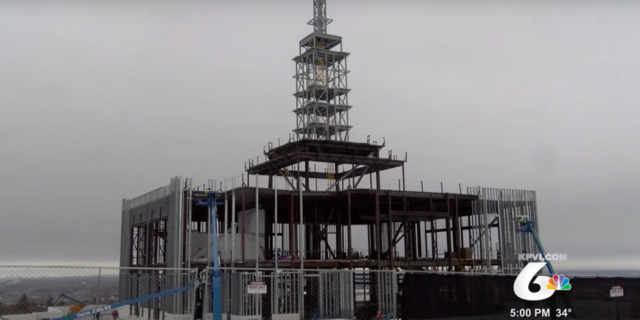 The outline for the Gem State’s sixth temple is starting to form.

Local Idaho news station KPVI shared a video highlighting the construction progress of the Pocatello Idaho Temple of The Church of Jesus Christ of Latter-day Saints. The temple was announced in April 2017 and ground was broken for the project in March 2019.

At present, construction workers are assembling the exterior of the building which is made of what is called “temple white granite” from China. The pieces are cut individually and then numbered prior to shipment. Then in Pocatello, the stones are assembled like a puzzle.

“It’s timeless. It’s just a beautiful stone that will look fresh for a long time,” said Elder Roger Prewitt, a senior missionary who was called to oversee the temple’s construction.

The Pocatello Idaho Temple will serve more than 64,000 members of the Church in eastern Idaho.

“The temple, as it’s complete, is going to really stand out on the hillside, especially during the day when it’s bright, or at night when the temple is all lit up. I think it’s going to be a beautiful beacon for people to see,” said Elder Prewitt.