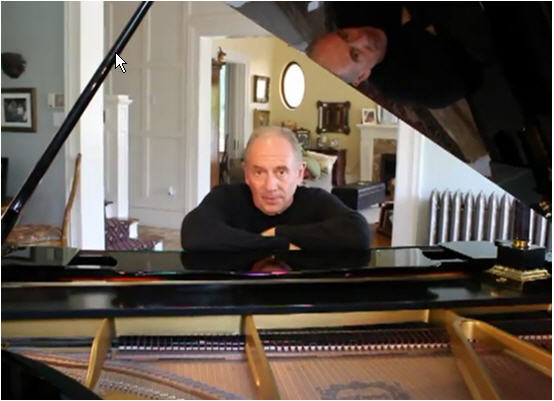 Robin Solman lived in Salt Lake City for most of her life but never had the opportunity to perform in the Tabernacle; few singers do. Now Robin lives in a tiny little town in Australia. The 2006 census lists its population at 186—a far cry from Salt Lake City in every way.

And yet, this Christmas, along with many others around the world, Robin will be singing with composer Lex de Azevedo and performing his Christmas oratorio Gloria! in the Salt Lake Tabernacle on November 26th, the weekend of the lighting of the Christmas lights on Temple Square, without actually going to Utah.

While Robin, and any other good singer with the means to travel, is more than welcome to travel from Australia to Utah to sing in the Tabernacle with the live choir, sometimes such a trip is all but impossible. But with the miracle of technology, singers can sing “in” the tabernacle this Christmas anyway—virtually.

The novel idea is creating a buzz of excitement among choral singers worldwide. Wherever they live and whatever their faith, those wishing to participate can also join the Facebook Group “Virtual Millennium Choir” to communicate with Lex and each other about Gloria! (See Lex de Azevedo's personal invitation here.)

The history of Gloria! includes disaster and triumph.

Gloria! debuted in 1999 in Israel with the Jerusalem Symphony, Millennium Choir and two choirs from Israel in the Citadel—with Gabriel (George Dyer) standing on the actual ruins of the ancient city wall of Jerusalem. The video recording of that event was hosted by James Earl Jones. Carole Mikita of KSL-TV Eyewitness News (Salt Lake City) hosted The Making of Gloria, a video documentary, back in 1999 and will be reporting again on our historic combination of live and virtual choirs in the Tabernacle this Christmas.

Then, just last Christmas, it was scheduled to be performed in the Provo Tabernacle, but that historic building was tragically destroyed by fire the very day of the concert, along with several priceless musical instruments and a staggering amount of sophisticated video, sound and lighting equipment, beautiful Christmas sets and costumes. Thankfully, no one was hurt.

Almost immediately, the choir moved to the Alpine Tabernacle and feverishly procured replacement equipment and costumes—a monumental task. They were even able to add a third performance at Utah Valley University as a very reverent and sobering tribute to the Provo Tabernacle, thanks to the generosity and tireless efforts of many caring volunteers.

This Christmas, Lex de Azevedo hopes the virtual choir will be a new page for Gloria! while many around the globe unite to sing the oratorio on the weekend of the lighting of the Temple Square Christmas lights.

What is a “virtual choir”?

A virtual choir is created when the voices from all the singers’ videos are mixed together and the videos are arranged in a beautiful visual montage. Darrell Polka, from Wisconsin, submitted video #355 in a virtual choir that included over 2052 singers from 58 countries. (Watch one of several astonishing videos for that virtual choir here.)

Being part of a virtual choir was extraordinary, Polka said. “We [choir members] have felt so welcomed, so accepted and included in something so extraordinary and so friendly it breaks down all barriers of race, religion, geographic differences and other beliefs…I have felt nothing but humility, openness, genuineness and a real sense of being part of a family. It's unlike anything I've ever experienced”.

Polka is eager to continue that experience with Lex de Azevedo’s Virtual Millennium Choir.  “I can’t wait to submit my video now that I’ve heard the music on the website. It’s really wonderful.”

For Gloria!, participants will enjoy an added twist: the Virtual Choir and the Live Choir will sing together—in the Tabernacle—for the first time in history.

Visit www.millenniumchoir.org and learn detailed instructions on how to participate. The instructions include the printed music, audio recordings of the songs in performance and audio recordings of someone singing each vocal part. Just sing along as you learn it—and as you record it! Listen to the title song, “Gloria”, here, and “Fear Not, Zacharias” here to get an idea of what Gloria! is all about.

Those wishing to be in the virtual choir need only learn the music and submit video recordings of themselves singing the two numbers in the finale, without memorizing them.

Those wishing to be part of the live choir and have the means to come to Salt Lake City will audition by submitting a recording of themselves singing the audition piece. Then, if accepted, they will learn all 15 choral movements the same way, memorizing only the two numbers in the finale. The Live Choir is only required to attend four rehearsals in Salt Lake City, all during the week of the performance (Thanksgiving week in the USA).

And don’t forget to spread the word. The more singers that participate, the more amazing this novel performance will be.

The performance is Saturday, November 26, at 7:30pm, also in the Tabernacle.