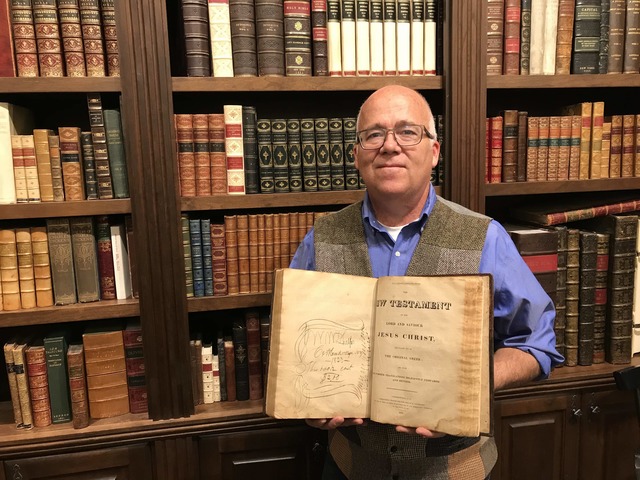 Before Reid Moon could acquire William W. Phelps' first-edition Book of Mormon and family Bible from his descendants last month, he and his associate Seth Soha had to sweat a bit.

"It was an audition," Moon said. "Before anything happens, tell us your story. What are you doing? What will you do with the books? This has been in our family for 195 years. What will happen differently?"

After several hours of discussion on July 7, Moon closed the deal by not only agreeing to pay a 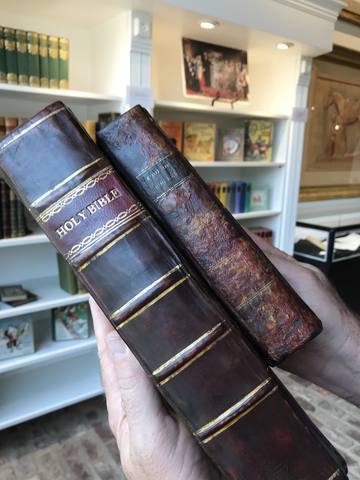 confidential sum, but the longtime collector of rare LDS books and documents also promised David and Naomi Brisco he would show their ancestor's books to the public and help to convey a more accurate view of Phelps' life through firesides and storytelling.

The next day, Moon, the owner of Moon's Rare Books in Provo, announced his latest acquisition on Facebook.

"If you were to ask me, 'Whose copy of the first-edition Book of Mormon would you like to own?' I would say I'd really like to own the copy that belonged to the man who wrote the hymns, 'Praise to the Man,' 'The Spirit of God' and 'If You Could Hie to Kolob,'" Moon wrote. "I am a big fan of W.W. Phelps and all that he accomplished."

Moon's recent acquisition of Phelps' 1830 Book of Mormon, originally purchased from the Grandin Book Shop only weeks after it was published, and a Bible Phelps bought for $2 in 1823, is timed with the release of a Phelps biography. The Book of Mormon was in poor condition and required some repairs, Moon said.

To fulfill his promise, Moon is collaborating with Van Orden to host a series of firesides at his bookstore on Monday, Sept. 10, with meetings at 5, 6, 7 and 8 p.m. Van Orden will give an overview of Phelps' life and the books will be on display in a glass case. People can RSVP through a link on moonsrarebooks.com.

In the past 25 years, Moon has acquired and sold more than 200 first-edition copies of the Book of Mormon. He likes to hold on to the books with provenance. In 2017, he obtained a first-edition Book of Mormon that belonged to Hyrum Smith, the Prophet's older brother and fellow martyr.

The Book of Mormon is a book of scripture for members of The Church of Jesus Christ of Latter-day Saints.

"I try to keep the books that tell a story because I love to share the stories," Moon said.

Phelps' life story is a compelling one. Listed as a writer, teacher, printer, newspaper editor and publisher, postmaster and lawyer on his Joseph Smith Papers biography, Phelps was introduced to the Book of Mormon in 1830 and was baptized in 1831. In time, Phelps was assigned to go to Independence, Missouri, to set up a printing office. While printing the church's newspaper, "The Evening and the Morning Star," and preparing to publish revelations given to Joseph Smith in the "Book of Commandments," Phelps' home and printing office were destroyed by a mob in 1833.

Five years later, after serving as a church leader in Missouri and participating in the dedication of the temple in Kirtland, Ohio, Phelps had a falling out with the church over issues related to church finances and land and was excommunicated in 1838.

Later that year, Phelps testified against Joseph Smith at a hearing where the prophet was accused of treason, which landed Joseph and others in Liberty Jail.

In 1840, a remorseful Phelps wrote to Joseph Smith asking to rejoin the Saints. Joseph replied that although his betrayal hurt, "we are yet alive," the Prophet wrote, according to JosephSmithPapers.org.

"Believing your confession to be real and your repentance genuine, I shall be happy once again to give you the right hand of fellowship," Joseph Smith wrote before paraphrasing Methodist poet Charles Wesley. "Come on dear brother, since the war is past, for friends at first, are friends again at last."

Phelps remained active in the LDS faith until his death in 1872. In addition to serving as a scribe, editor and printer, Phelps wrote several hymns that are part of the LDS hymnbook today, including "The Spirit of God," "Praise to the Man," "Redeemer of Israel," "Now Let Us Rejoice," "Gently Raise the Sacred Strain," "Come, All Ye Saints of Zion" and "Adam-ondi-Ahman," among others.

Van Orden's biography was already being published when he learned about Moon's acquisition of Phelps' books. He reached out to Moon and asked to see the books. In examining the historic treasures, Van Orden discovered a few interesting details from the listed family births, marriages and deaths in the Bible, Van Orden said.

In the Book of Mormon, they found a few editing notes and marks by verse of scripture, Moon said.

Peter Crawley, a longtime collector and writer on early LDS Church history and printing, examined the books and was astounded. 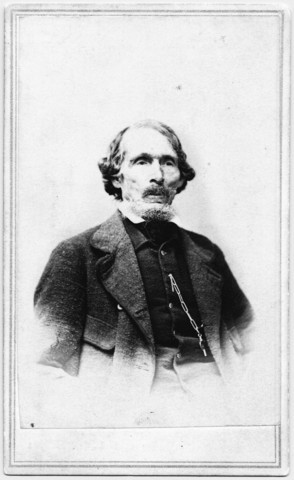 "I was surprised and pleased to see them because up to now, no books belonging to Phelps, as far as I know, have come to light, which is at least surprising to me because Phelps was so involved in various printing activities for 30-40 years. You would expect there would be lots of books that he owned, yet nothing has surfaced until now," Crawley said.

Soha, a part-time consultant for Moon at his bookstore, first learned about the books in February while working a booth at the LDS Church's RootsTech Conference. Naomi Brisco approached Soha and said her husband was a Phelps descendant and possessed his 1830 Book of Mormon. The book was falling apart. She was interested in getting the book appraised and wondered what it would cost to be restored?

Soha took her contact information. The information was lost, but he remembered her first name and had an area code.

"We searched quite a while and finally got in touch with her in Southern California," Soha said. "We found out her husband had a Bible as well."

In time, Moon and Soha were invited to the Brisco home to discuss the books.

Two major factors in the Briscos' descision to sell the books to Moon included their restoration and Moon's willingness to tell Phelps' story, Soha said.

"They feel like W.W. Phelps has a bad rap in history," Soha said. "When they found out that Reid could restore the books and also educate people on his life, that warmed their hearts and they were sold."

Sometimes rare family artifacts are better off outside the family, Moon said.

"You reach a certain stage in life and you start thinking about where will things go?" Moon said. "They were concerned about what could happen and interest and appreciation of rare family artifacts isn’t always hereditary. I think the parents realized that sometimes the best place isn’t to stay in the family, but rather go outside. What I always push is visibility. The lives these books can touch is far greater in most cases because it’s not being buried in an institution. A lot of books just are off-limits. But these will be shown."

What: An Evening with W.W. Phelps with Bruce A. Van Orden

Lead image: Reid Moon, a collector of rare LDS Church books and documents, holds up a Bible that once belonged to William W. Phelps. Moon recently acquired the Bible and a first-edition Book of Mormon that both belonged to Phelps.