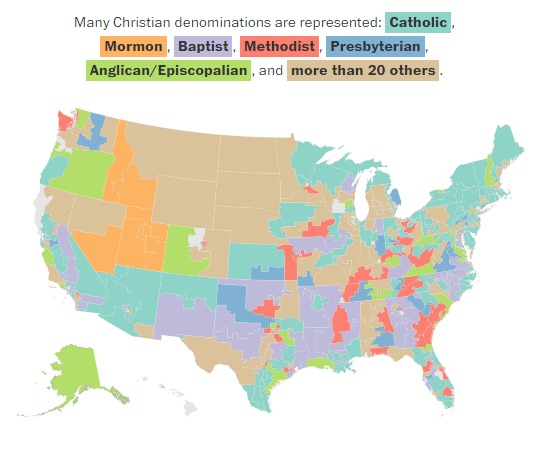 In a recent article outlining the religious breakdown of the current Congress, The Washington Post made specific note of the Latter-day Saints in the group (noted on the map below in orange).

The article noted several key takeaways from the study, including a few that noted changes for the Mormon representatives:

"The only two states where all House members are the same faith (other than states with only one district) are Idaho and Utah, where all members are Mormon. Mormon members are also all Republican now, without former Rep. Jim Matheson (D-Utah), who did not seek reelection in 2014. (There are still two Mormon Democrats in the Senate -- Nevada's Harry Reid and New Mexico's Tom Udall.)"

The article also noted that Latter-day Saints were one of the few religious groups that saw an increase in numbers since the last Congress, from eight representatives to nine. (The other groups with increased numbers were Catholics, from 136 to 139, and Baptists, from 66 to 68.)

Get the complete list of Congress members' religious affiliations and additional insights on the religious composition of Congress in the full article.