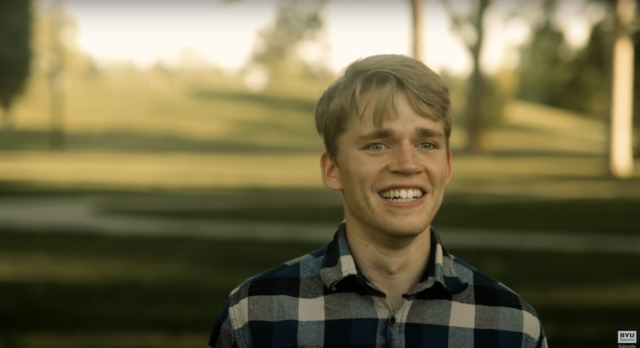 The address was delivered in 1980 when Elder Holland was the Commissioner of the Church Educational System. He introduced the topic of his talk by speaking of how trouble is universal:

"I believe it is a form of evil. At least I know it can have damaging effects that block our growth, dampen our spirit, diminish our hope, and leave us vulnerable to other more conspicuous evils. I address it here this morning because I know of nothing Satan uses quite so cunningly or cleverly in his work on a young man or woman in your present circumstances. I speak of doubt—especially self-doubt—of discouragement, and of despair.”

Elder Holland later told a story about an acquaintance who encountered some of his own personal despair as an 18-year-old. It was the 1930s, and this young man was from a small Southern Utah town and had to travel east for family matters. He hadn’t gone beyond his hometown much before and would have to change trains in Chicago. So while his sister had given him directions of how to catch the right train, he was terrified.

“And then his humble, plain, sun-scarred father did something no one in this room should ever forget. He said, ‘Son, wherever you go in this Church there will always be somebody to stand by you. That’s part of what it means to be a Latter-day Saint.’ And then he stuffed into the pocket of his calico shirt the name of a bishop he had taken the time to identify from sources at Church headquarters. If the boy had troubles or became discouraged and afraid, he was to call the bishop and ask for help.”

Elder Holland then told of how the young man arrived in Chicago for the night and did call the bishop when he started to feel anxious about making the train. Although the bishop wasn’t there, the bishop’s wife answered, and she invited him to join them and other ward members the next day before his train left if he still felt worried.

► You may also like: Watch: BYU Speeches shares the parable of the bicycle in this new inspiring short

The following morning, he correctly followed her directions to join them. But when he ended up in Lincoln Park, he remembered the bishop’s wife had “said something about a park” but it wasn’t the dusty park he was used to in Southern Utah. When he saw no sign of the bishop, a ward, or a meetinghouse, he “suddenly felt more alone and overwhelmed than he had at any moment in his life.” The tears wouldn’t stop. But then, in the distance, he heard the sounds of something familiar—the hymn “Come, Come Ye Saints.”

He ran as fast as he could.

“The sounds were crystal clear, and he was weeping newer, different tears. For there over a little rise huddled around a few picnic tables and bundles of food were the bishop and his wife and their children and most of the families of that little ward. The date: July 24, 1934. The sound: a slightly off-key a cappella rendition of lines that even a boy from Southern Utah could recognize.

“Gird up your loins; fresh courage take;
Our God will never us forsake;
And soon we’ll have this tale to tell—
All is well! All is well!”