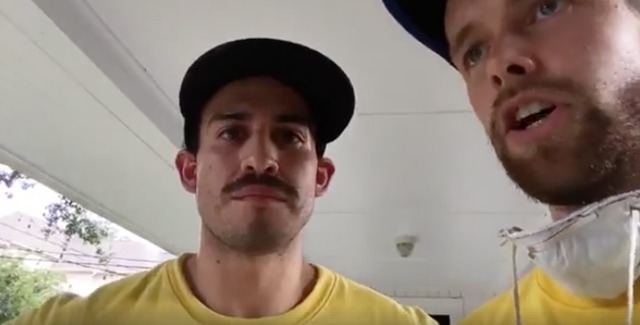 Thanks to Mormon Life Hacker for making us aware of this video.

As the floodwaters finally begin to recede in the Houston, Texas, area following Hurricane Harvey, the sheer amount of destruction left behind is devastating.

"Right now, in Texas, there are about 32,000 people who are living in shelters," Armando Porras said in a Hi Five Facebook live video as he walked by mounds of possessions ruined by floodwaters. "We can't finish describing how much damage has been done. It's terrible."

Yet amid all this loss and devastation, Church members have reached out, offering aid to others when many have experienced the devastation of the floods themselves.

In Beaumont, Texas, more than 700 gathered to receive bottled water, food, clothing, and other supplies in an LDS meetinghouse that's been converted into a shelter/emergency distribution center, according to the Deseret News.

In Tomball, Texas, a Primary room in an LDS meetinghouse was converted into an emergency control center for those fleeing floodwaters, according to the Deseret News.

On Sunday, President Dieter F. Uchtdorf,  Bishop Gérald Caussé of the Presiding Bishopric, and Elder J. Devn Cornish of the Seventy attended Sunday services with those from four congregations who were affected by the flooding, urging them to reach out and help others as well.

And many others are continuing to serve in what has been record-breaking, catastrophic flooding in Texas this past week, including Armando and his friend Jacob Dangerfield.

"It's super sad but it's something that has to be done," Armando says, noting that everything below the waterline in the homes he is helping to clean out had to be torn out and thrown away.

Despite this, Dangerfield says in the video there's also been an outpouring of love as many work together to rebuild their homes and move forward with their lives, some even looking for and recognizing the work Church members have done to help.

"It's been awesome to see how people have looked for the yellow shirts, looked for the Mormons because they know that there is peace afterward, there are helping hands," Armando says.