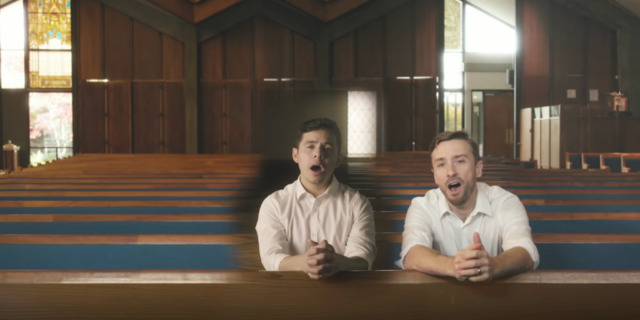 Watch: David Archuleta and Peter Hollens perform stirring rendition of ‘It Is Well with My Soul’

A new video by Peter Hollens featuring Latter-day Saint artist David Archuleta reminds listeners that whatever trials may befall our lives, the Lord has taught us to say, “It is well with my soul.”

Using technology, the two musicians made a video that makes it appear as if they are in the same location, even though they filmed it virtually. The video, published on Friday, has over 75,000 views.

The video takes place at a church. Some of the lyrics convey a conversation with Deity:

When peace like a river, attendeth my way,
When sorrows like sea billows roll
Whatever my lot, thou hast taught me to say
It is well, it is well, with my soul.

“Working with David Archuleta is always a pleasure,” Hollens says at the end of the video. “I hope you enjoyed this.”

► You may also like: When David Archuleta knew the Church was true

The video is not the first time the two musicians have teamed up to create music. In 2014, Archuleta and Hollens joined with The Piano Guys and the Tabernacle Choir to release a version of “Angels from the Realms of Glory.” Four years later in 2018, they also released a video of the song “Loch Lomond.”

Enjoy more music from David Archuleta with his album Winter in the Air. This collection of Christmas favorites and originals celebrates the joy and true meaning of the season. Available now at DeseretBook.com.