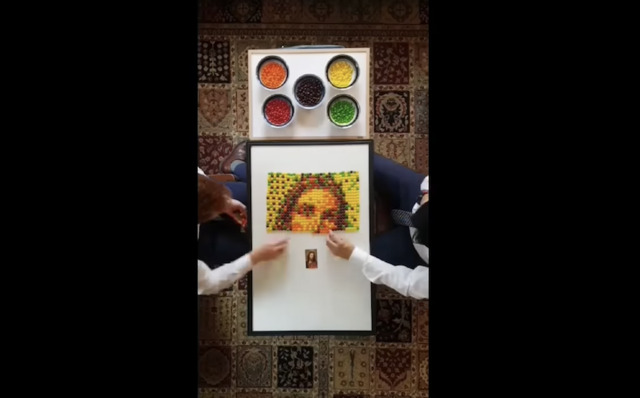 Watch: Missionaries use Skittles to compose stunning mosaic of Christ

Elder Spencer Wagstaff and Elder Manu Tefan had a “sweet” message to share on Facebook recently—in more ways than one.

The two missionaries of The Church of Jesus Christ of Latter-day Saints have been getting creative lately during the pandemic to bring others closer to Christ. In this case, that meant creating a picture of the Savior through an unusual medium: Skittles.

A time lapse shows the elders creating a type of mosaic using orange, red, green, yellow, and purple Skittles to resemble a portrait of the Savior. Carefully planning out the project on a grid system and after some trial and error, the companionship finished the picture in about five to six hours, using about 1,500 Skittles in total.

The missionaries shared their testimony in a simple caption in their video on Facebook, saying the “Only thing [sweeter] than Skittles is Jesus!” 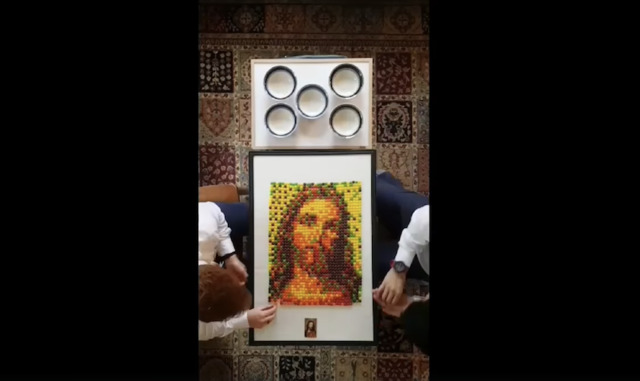 Elder Wagstaff, originally from Clinton, Utah, was serving in Brazil when the pandemic hit before he was reassigned to the Manchester New Hampshire Mission. Elder Tefan, from Tahiti, has been serving in that same mission, but due to the pandemic is being reassigned and will finish his service in the Tahiti Papeete Mission. The video has generated positive feedback from many, and has been a helpful tool in the elders’ missionary work.

“We have gotten some really good responses from some of the groups in the area we are serving in!” says Elder Wagstaff. “People have reached out to us from all faiths, and we have had some great teaching opportunities and chances to share our testimonies of the Savior through this video."

The video has over 24,000 views on Facebook and more than 350 shares. Many who commented on social media about the clip expressed how it was inspiring to them.

“Incredibly awesome. In these times I needed that,” wrote commenter Charles Hamlin.

Of all the projects they could have focused on, a portrait of Christ seemed most appropriate at times like these, as the Savior is “a beacon of hope during these tough times” says Elder Wagstaff. They also hoped to help others “rely on His atoning sacrifice,” he says.

During the pandemic, Elder Wagstaff and Elder Tefan have taken advantage of technology to share the gospel through social media, videos, livestreams, and messaging others and inviting them to come unto Christ.

“God is good,” says Elder Tefan. “He is there and loves us. He has a plan for us, even when it doesn't seem like it. I know that trusting in Him, especially when it doesn't make sense, always leads to a better place.”

Adds Elder Wagstaff: “I know that God and Jesus Christ live and love us. I know that the same church that Christ established has been restored through the prophet Joseph Smith. I know that the Savior is a beacon of hope and through him we can have peace, hope and one day return to live with our Heavenly Father again.”