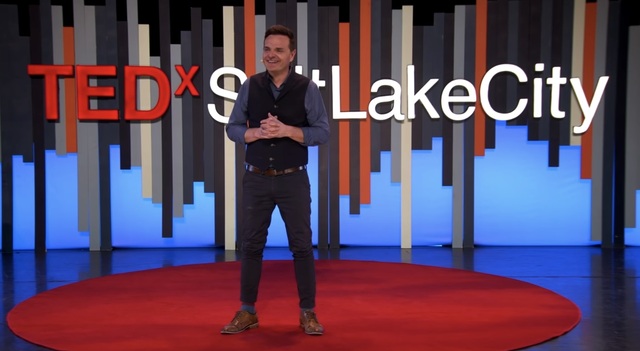 Watch: Steven Sharp Nelson asks, ‘What if music could find someone you've lost?’

When Steven Sharp Nelson, cellist for The Piano Guys was just 2 years old, his mother was diagnosed with a brain tumor. She outlived all medical prognoses but passed away 18 years later. However, at a recent TEDx event, Nelson testified of the power of music to bring those we love back to us.

Speaking of his mother, he said, “She’s one of the greatest lyrical sopranos that’s ever lived—ineffably gifted with the voice of an angel. She could’ve had center stage anywhere, anywhere in the world, but she gave that up to be my mom. She gave me this stage with you today.

“She’s been by my side when I’ve been particularly nervous for a big performance touring the world with the Piano Guys, or when I’ve been off the stage and at the mercy of anxiety and depression. Or when I’ve felt like I’m under the thumb of this perniciously pervasive demon known as inadequacy that so many of us are fighting. She’s gently nudged me forward, right at the moment when I felt like giving up. So I am a musician today, not only because of what she gave up for me but also because of what she continues to give me.”

Nelson explained that following his mother’s passing, he grieved the experiences he would never have with his mother.

“When her final curtain call came, I couldn’t applaud because I wasn’t ready for it to end. So, after she passed away, I spent some time being angry, bitter, resentful, confused at these years that were stolen from me—at the chance I never had to know the soprano in this beautiful woman, to hear her sing in full voice without pain, to perform with her,” he said. “Oh, I would’ve loved that, just me playing the cello right next to her, just looking up at her beautiful face—I would’ve loved that chance.”

And while the thought of never getting to perform with his mother brought him sadness, Nelson also found healing through music.

“Isn’t it true that our life’s most sublime melodies tend to be written during the dark symphonies of our struggle?” he asked the TEDx audience. “And in this dark symphony, I found a healing fermata. The very thing that had wounded me was the same thing that healed me: the power of music.

“You see, since then I have spent some very special time with my mom. Through music, I’ve discovered that the people we’ve lost aren’t lost at all. And the holes their absence leaves inside us are not meant to be filled by someone or something else. Instead, they are intentional, mindful places meant for us to go, to take refuge, to reconnect and reunite with our loved ones—to find them there, still interested, still invested, and somehow still involved in the details of our lives. That is where I found my mom.”

Nelson explained that this ability music holds to bring the people we love back to us is not something that can be proved with science. And that while spirituality helped him take the first step, ultimately it is something you have to experience for yourself. Inviting the TEDx audience to join him, Nelson led a meditation of sorts as he asked those watching to close their eyes, think of a loved one they’d like to connect with, picture a favorite or relaxing place, and picture the person you love standing across from you with as much detail as possible. He then proceeded to play his mother’s favorite piece of music, “Nessun Dorma,” which he had never before performed publicly, and said he has found that his mother’s voice “is still sweet and rings with a resounding relevance. As I play, I hope you can hear the voice of your own angel, and let music find someone you’ve lost.”

You can hear more about Nelson’s mother’s miraculous life and her influence on him in this All In podcast episode at the 25-minute mark.