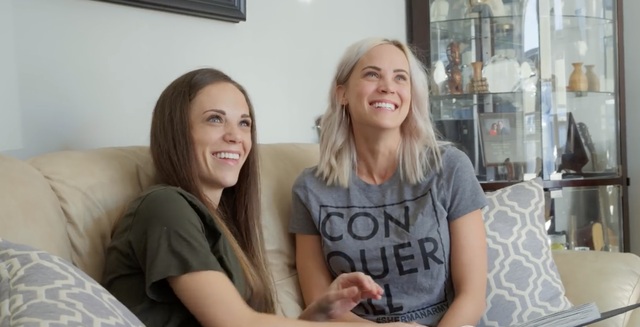 You may have heard of someone with Cystic fibrosis (CF) but you may not know what it is. Or if you do, you may not have any idea how it affects someone’s life on a day-to-day basis.

A new video created by Latter-day Saint filmmaker and YouTuber Devin Graham seeks to raise awareness about CF. The video was released last week and has 75,000  views. It features Latter-day Saints Mandie Sherman and Natalie Moss, two sisters who have CF, and captures the love of a family when battling a life-threatening illness each day.

Shortly after Mandie was born, the doctor told her parents that she was expected to live about 18 years. As a result, her parents went through a mourning period. But a sister-in-law’s reminder that none of us have a guarantee on the length of our lives helped her parents decide that they were going to appreciate every day with Mandie and give her the very best life possible.

When Mandie was 3 years old, her young sister, Natalie, was also born with CF. Together, they have battled the disease which affects the way your body creates mucus, making it thick and sticky. This impacts the lungs, creating “the perfect environment for infection, it’s like a petri dish,” Mandie explains. They do breathing treatments two to three times a day. Each session takes about 30–45 minutes.

“Growing up, we didn’t know we were the different ones—we had each other. We were both going through the same trenches,” Mandie says. “Both had to wake up super early to do treatments, both had to take lots of pills and had lots of doctor appointments, but we were able to do it together.”

Natalie says that having a big sister to go through CF with has made all the difference in her journey.

“CF is hard. It is constant, it’s 24/7. There are no breaks. . . . It’s been just really such a blessing that we have each other,” Natalie says. “Her positivity and her example and her fight is inspiring to me and it makes me fight just as hard.”

The video celebrates Mandie’s 30th birthday, meaning she has now lived 12 years longer than expected at the time of her birth. In those 12 years, she has become a wife and, against all odds, a mother. It is her family's hope and belief in eternal families that gives them perspective and purpose even amidst the difficulties of CF.

You can watch the entire video about Mandie and Natalie’s life with CF here. You can also follow along with their journey on Instagram through their accounts: @shermanmandie and @natalie_moss.