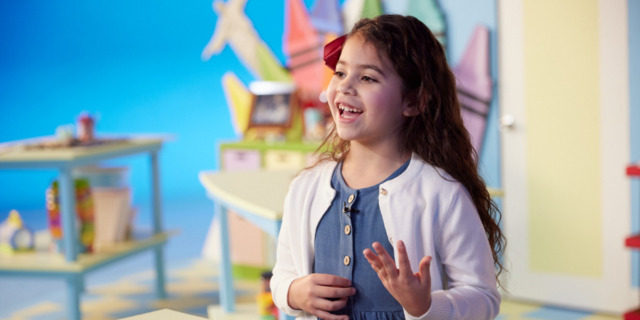 Watch this sneak peek of Saturday's Friend to Friend event, an interactive broadcast for children

byNewsroom of The Church of Jesus Christ of Latter-day Saints | Feb. 15, 2021

Leaders of The Church of Jesus Christ of Latter-day Saints are extending a special invitation to Primary children ages 3–11, parents, and leaders to watch the Friend to Friend broadcast, a worldwide event that premieres on February 20, 2021, to encourage children to follow Jesus Christ and serve others as He did.

“The Savior asked for the children to be brought to Him,” said President Joy D. Jones, of the Church’s Primary general presidency, referencing scriptures about the life of Jesus found in the New Testament and the Book of Mormon.

The Primary, a church organization that supports the home, provides religious instruction and activities for children.

“This event is an opportunity to bring the children to Him, for them to have an experience to draw closer to Him, feel the Spirit, and feel that special love that is there for each and every one of them,” Sister Jones shared.

“The core message of this whole event is that we can help just like Jesus, and that by following His example, we can help others and make our communities and our families a much better place where we all feel the love of the Savior,” she added.

The interactive broadcast for children — similar to the Church’s Face to Face-style events— will have President Russell M. Nelson, Elder Ulisses S. Soares of the Quorum of the Twelve Apostles, and members of the Primary general presidency all sharing Christ-centered messages.

In addition to hearing from Church leaders, the Friend to Friend program will introduce Latter-day Saint children from around the world, including Tahiti, the Philippines, Uruguay, Poland, and the United Arab Emirates.

The broadcast has been designed to be engaging for children, with simple activities such as singalongs and crafts that can be replicated at home. The program’s activities also change every 2-3 minutes.

“I think that it’s going to help them see that even though they’re kids that they can … still serve Jesus,” said 10-year-old Payson Inkley from Centerville, Utah, who will co-host the English-language event.

Seven-year-old Brianna Villsnil, a Latter-day Saint from Salt Lake City, Utah, who will accompany Inkley as a host, also expressed her excitement for the upcoming event.

“A lot of kids are going to learn about Jesus, and I’m helping them. It just makes me feel so happy and proud of myself,” she said.

Each originating event, produced in English, Spanish and Portuguese, will include native-speaking hosts from each age group and will debut in these languages on February 20.

On March 13, 2021, the event will be available for viewing in Cantonese, French, German, Italian, Japanese, Korean, Mandarin, Russian, Cebuano, and Tagalog.

“We want to reach all the kids, every single child around the world in their own language, so they can understand [the gospel] better,” said Sister Cristina B. Franco, second counselor of the Primary general presidency and a native of Argentina.

President Jones explained that to increase children’s interest and engagement with the program, the event will be edited into shorter video segments that parents, leaders, and children can use according to their own learning interests and needs.

“They can take a little segment of this Friend to Friend and they could use it for a discussion in a family home evening, or they could use it on Sunday when they’re having scripture study and that children can watch over and over,” she said.

Mike Madsen, a Priesthood and Family Department employee who helped organize the event, said viewers can expect the children-focused program to have fun-filled moments, including seeing an animated version of a 10-year-old Elder Soares and watching the hosts interact with a newly-designed stage created for this and future Friend to Friend events.

“We’ve built this to engage the children in the learning,” Madsen said.

Although the upcoming Friend to Friend’s activities and lessons will be shared at a time when the global faith’s members, including children, are facing limited or no in-person worship opportunities because of pandemic-related safety precautions, the Primary general presidency explained that the emphasis on gathering virtually was simply a coincidence.

“This was an initiative that was conceived long before COVID even came,” said Sister Lisa L. Harkness, first counselor of the Primary general presidency. “We counseled among ourselves, ‘How can we better reach the children of the world? Why don’t we do a Face to Face but call it Friend to Friend and have it more child friendly?’”

“We feel that it will be a great blessing to children to remember that they are sons and daughters of our Heavenly Father, that they can feel His love that they make a difference,” said Sister Jones. “They haven’t been in Primary for almost a year [due to COVID-19], and we missed them, and we wanted this to feel like an outreach of love and of special expression that we need them.”