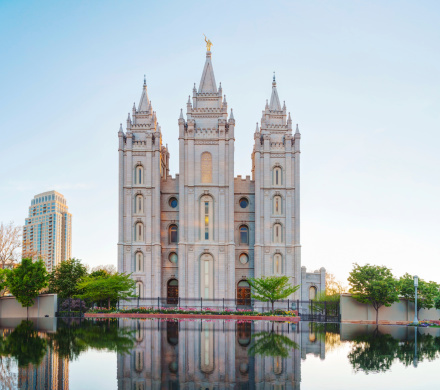 What Does It Really Mean to Avoid Light-Mindedness and Loud Laughter?

byHugh Nibley, excerpted from "Eloquent Witness: Nibley on Himself, Others, and the Temple" | Jan. 11, 2019

The gospel was given to Adam and Eve when, “after many days” of sacrificing, “an angel of the Lord appeared unto Adam” and taught him the plan of salvation (Moses 5:6–9). Adam and Eve joyfully embraced it and taught it to their children (see Moses 5:10–12). But “Satan came among them, saying: . . . Believe it not; . . . and men began from that time forth to be carnal, sensual, and devilish” (Moses 5:13). The gospel entails a definite pattern or style of life best defined as the opposite of “carnal, sensual, and devilish.” One of the charges or responsibilities connected with adherence to the gospel is reiterated in the “Olive Leaf” revelation: “Organize yourselves; . . . establish a house, even a house of prayer. . . . Therefore, cease from all your light speeches, from all laughter, from all your lustful desires, from all your pride and light-mindedness, and from all your wicked doings” (D&C 88:119, 121).

As to light-mindedness, humor is not light-minded; it is insight into human foibles. There is nothing light-minded about the incisive use of satire often delivered with an undertone of sorrow for the foolishness of men and the absurdity of their pretenses. Such was the cutting humor of Abinadi addressing the priests of King Noah—there was nothing light-minded about it, though it might raise a chuckle. What is light-minded is kitsch, delight in shallow trivia; and the viewing of serious or tragic events with complacency or indifference. In this it is light-minded, as Brigham Young often observed, to take seriously and devote one’s interest to modes, styles, fads, and manners of speech and deportment that are passing and trivial, without solid worth or intellectual appeal. There are times when nonsense is not light-minded, but insightful. Horace is the classic example: his good-natured and funny satire is a sad exposure of the evils and corruption of his times, so disturbingly like our own.

As to laughter, Joseph Smith had a hearty laugh that shook his whole frame; but it was a meaningful laugh, a good-humored laugh. Loud laughter is the hollow laugh, the bray, the meaningless laugh of the soundtrack or the audience responding to prompting cards, or routinely laughing at every remark made, no matter how banal, in a situation comedy. Note that “idle thoughts and . . . excess of laughter” go together in Doctrine and Covenants 88:69.

As to light speech and speaking evil, my policy is to criticize only when asked to: nothing can be gained otherwise. But politicians are fair game—the Prophet Nathan soundly denounced David though he was “the Lord’s anointed,” but it was for his private and military hanky-panky, thinking only of his own appetites and interests. Since nearly all gossip is outside the constructive frame, it qualifies as speaking evil. 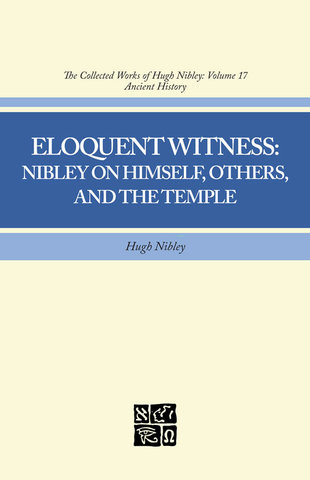 In the tradition of Approaching Zion, this book represents Nibley at his best. It is loaded with stunning insights on the temple, trenchant social commentary and fascinating autobiographical details.

One of the stunning aspects of Dr. Hugh Nibley's genius was his persistent sense of wonder. That trait induced him to range widely through very disparate subjects of study — all covered in volume 17 of The Collected Works of Hugh Nibley on Himself, Others, and the Temple. In this compilation of materials, most of which have been published previously outside the Collected Works volumes, Nibley explores the ancient Egyptians, the temple, the life sciences, world literature, ancient Judaism, and Joseph Smith and the Restoration. The contents of this volume illustrate the breadth of his interest through autobiographical sketches, interviews, book reviews, forewords to books, letters, memorial tributes, Sunday School lessons, and various writings about the temple.