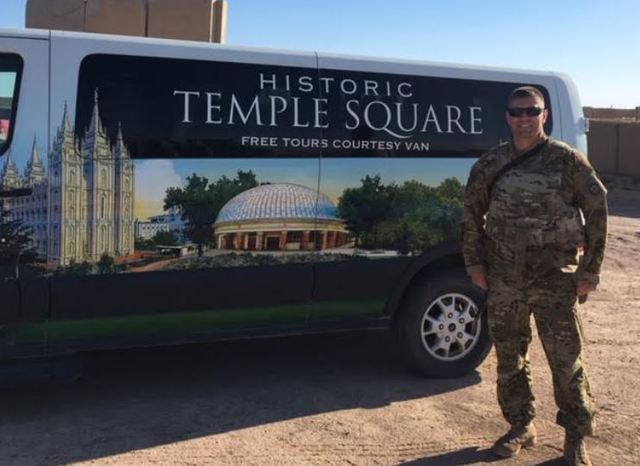 In the Anbar province, Iraq, near the end of March 2019, four Utah National Guard soldiers saw a surreal yet familiar sight: the Salt Lake Temple drove into view on the Al-Taqaddum Air Base. The men were 45 miles from Baghdad and 20 miles from Fallujah, Iraq's city of 200 mosques. In the heart of Iraq near one of Islam's ultra-conservative strongholds, the green trees and glinting angel Moroni of Temple Square was one of the last things any of these men expected to see.

But Capt. Mark Kattelman, 1st Lt. Ron Beckstrom, Chief Warrant Officer 3 Tyler Hobbs, and Sgt. 1st Class Jason Townsend unexpectedly saw a transport van with the words "Historic Temple Square free tours courtesy van" crisply printed on the side above the image of the Salt Lake Temple and Tabernacle. For the men who had been deployed since May 2018, the sight brought an unexpected piece of home. 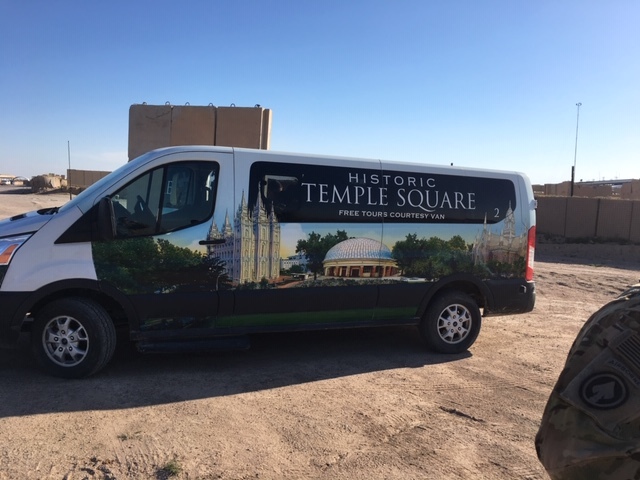 A Temple Square tour van on the Al-Taqaddum Air Base. Image courtesy of Capt. Mark Kattelman.

"Initially, it took me a second to recognize it was out of place," Capt. Kattelman says. "It was special for us to see a reminder of the Salt Lake City Temple and a reminder of home."

Kattelman continues: "Each member of our group took the opportunity to take a picture with the van, and we laughed about the circumstances that may have led to the van ending up there."

While these Utah-natives enjoyed speculating about the van's origins, the true story behind how it arrived at the Al-Taqaddum Air Base is a mystery. Kattelman thinks it was most likely a surplus vehicle and the purchaser did not want to take the time or money to remove the Temple Square graphics.

Regardless of how a van from Salt Lake City ended up on the sandy plains of Iraq, it meant something to Kattelman. "Seeing the van to me was a reminder of home and what feels like home to me," he says. "My faith and membership in The Church of Jesus Christ is special to me," he says.

But the van meant something different for other soldiers on the base.

"While waiting for [our] aircraft to arrive, a group of soldiers were making disrespectful comments regarding The Church of Jesus Christ of Latter-day Saints," Kattelman says. "This is a common situation, as there are many who only know the stereotypes associated with our religion." But Kattelman also recognizes that these moments create "an opportunity to stand up for our faith. I did exactly that."

He continues, "I raised my voice and asked if they were talking trash about Mormons. They stopped and asked if I was a Mormon, to which I proudly responded that I was. I was ready to fight, but was immediately overcome with a sense of peace and smiled at them. . . . I am reminded that in those situations I should not fall back on my imperfections and jump to confrontation. I am reminded that it creates an opportunity to represent our church. Although I am not perfect, I was reminded of that, and that is why I began to smile." 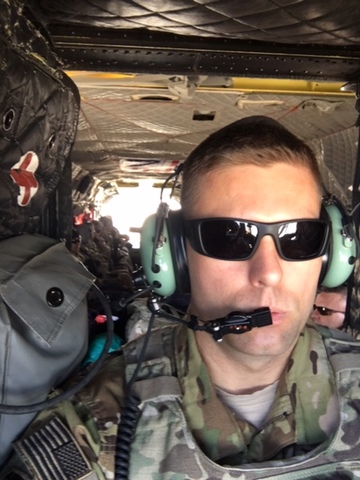 Much like President Thomas S. Monson, who "dared to stand alone" as a Latter-day Saint at Navy boot camp, Kattelman had the courage to live and represent his faith. But in that moment, he also felt love and respect for the soldiers he was speaking to. "I really do not think they meant any disrespect to me or any member of our faith," Kattelman says. "They are a noble group of soldiers who are assigned to a tough place and away from home."

But, as Kattelman has learned, even in alien landscapes far away from what is familiar, God will send small graces to remind us of Him, our faith, and all they mean to us.