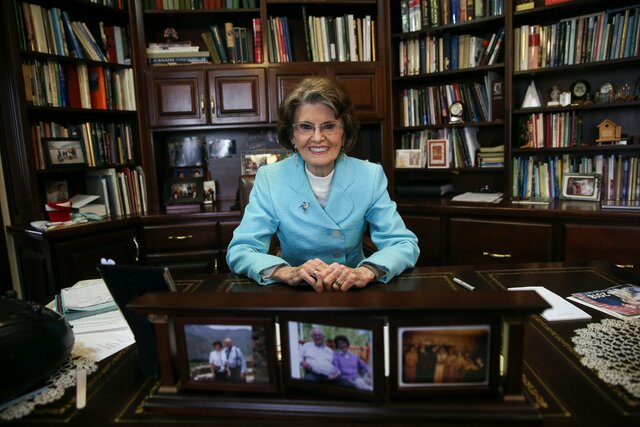 Walking into Sister Ardeth Kapp’s house on a snowy January day feels a bit like walking into a time machine.

Sister Kapp—who turns 89 years old this year—was called as the ninth Young Women general president in 1984. Her birthdate is March 19, 1931, the same era when President Heber J. Grant was president of the Church. She attended Brigham Young High School (which ceased operation in 1968) with now-President Dallin H. Oaks, who wrote in her high school yearbook that she has “a wonderful soul that is your most prized possession.” 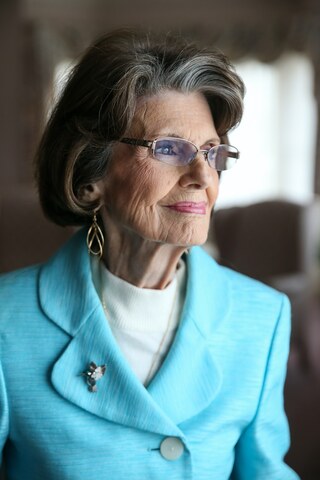 Sister Kapp and her counselors were the first to reveal the Young Women Theme that I recited every Sunday between the ages of 12 and 18 before the turn of the 21st century. She remembers when women were moved into the stands at general conference and when the first female speaker spoke during an official session.

And yet, you would never know Sister Kapp’s age by spending a morning with her. Her mind is sharp and her memories are a church history gold mine. What does she think of all the changes to the Young Women program, Come, Follow Me, and the Church as a whole since Russell M. Nelson became president of The Church of Jesus Christ of Latter-day Saints? Here’s her take.

In October 2019 general conference, a new Young Women theme and changes to the program’s class structure were announced. The Church also retired the terms “Beehive,” “Mia Maid,” and “Laurel,” in favor of organizing classes according to a ward’s specific needs. But while Sister Kapp worked hard to build many changes in the Young Women program during her time as Young Women general president, these new adjustments don’t give her any pause.

“My feeling honestly has been I believe in continuing revelation,” she says. “It’ll always be better than it’s even been before for this specific time, and so I can just raise my hand to the square.”

Sister Kapp shares how during her time as Young Women general president, the women leadership trusted in that continued revelation. According to Sister Kapp, Sister Patricia Holland gave a prayer before presenting the proposed changes for the Young Women program in the 1980s. In the prayer, she entreated God to help them know whether the changes they were proposing were right.

“If this is what the Lord wants for the preparation of young women at this time, then we pray that the brethren’s ears will be open when we take the plan to them,” Sister Kapp recalls Sister Holland praying, “and if it isn’t that they’ll be closed and we’ll go back and keep working.”

The changes were approved. In celebration, the young women and their leaders sent balloons to Young Women all around the world. They invited them to write their testimonies on a card, attach that card to the balloon, and then release the balloon to the sky.

“We knew about the sons of Helaman, but now we know about the daughters of helium,” people quipped afterwards. But Sister Kapp now considers that day just a small indication of what the future held for the young women of the Church.

Speaking of the missionary age change in 2012, she says, “It had been 25 years since the young women attached their testimonies to balloons and sent them into the world. That glorious October day was . . . foreshadowing [the] day when thousands of young women would attach missionary tags on their hearts and go out and bear their testimonies eye to eye.”

With a master’s degree in curriculum development from Brigham Young University, experience on the correlation committee, and having worked on the Church Curriculum Department, Sister Kapp knew years ago that if the Church was to serve members worldwide, some vital changes needed to be made. So, a paragraph in a Church publication years ago about the importance of putting disinfectant in your shoes when there were people in the world without shoes—well, that simply had to go.

She also recognized that standards in the For The Strength of Youth pamphlet with reminders like, “Don’t go downtown with your hair in curlers” or “Put gum in your wastepaper basket” were outdated. Interestingly, she recalls that the updated pamphlet was approved as the result of a chance conversation with President Thomas S. Monson.

“Those things behind the scenes aren’t magic, they’re just the hand of the Lord moving things in a way that makes everyone feel responsible,” Sister Kapp says.

Sister Kapp says Come, Follow Me is another step forward in our efforts to become disciples of Jesus Christ.

“I think it’s truly inspired with a tremendous responsibility, but a high level of conversion and practice,” she says. “As long as we’re on a track running to do whatever we can do and check it off, we can get it on the outside. But if we don’t get it on the inside, it’ll just wash off under pressure.”

More Than a Ministering Assignment

Sister Kapp also believes the implementation of ministering has immense possibilities and significance for the future.

“The feeling that I’ve had about it is that so much of our loyalty to the Church is dependent on our filling an assignment and checking it off: ‘I’ve paid my tithing, I’ve paid my fast, I went to church, I did my lesson,’ but I think ministering is deeper than assignments,” she says. “I think ministering is... what we feel inside because of the testimonies that we have. We see people and we have a yearning to be able to help them carry their burden or share their joy.”

She recalls receiving a letter from a lady in Idaho who wrote, “Thank you so much for taking your precious time to look at me. So few people care nowadays.”

“Could we just look at someone and be ministering?” Sister Kapp asks me. “It’s what we feel inside about that person that might be more important than what we say.”

Ministering shouldn’t be limited to those we are assigned to minister to, Sister Kapp says. It’s about the day-to-day interactions with the people around us.

“In the grocery store, there might just be a little boy that is fighting with his mother and I’ll say, ‘If that child ever wants to run away from home, you can send him to my house.’ And then she’ll start to laugh and the little kid will laugh,” she says with a smile. But when it comes right down to it, people need to know they aren’t alone. “We walk in such isolation,” she says.

Ministering can begin with a phone call, an email, or a note, says Sister Kapp. And she proves it, too—since she lives down the street from an elementary school, she often ministers to the children in her neighborhood.

“A lot of kids don’t feel comfortable at school,” she says. “A lot of kids worry they’re not as smart and I think if we look for opportunities to strengthen anyone, anywhere, it can be a blessing.”

Sister Kapp grabs a picture frame and invites me to participate in the daily routine she does with each of the children who come to her door every day.

The children then read the framed print, which says, “Better than I was but not as good as I’m going to be.”

Sister Kapp then asks, “What are you doing?”

“Trying a little harder to be a little better,” comes the reply.

She then retrieves a bowl of candy. The kids are allowed to take a few pieces and she has them sign her guestbook. Pages and pages of their entries reflect Sister Kapp’s constant ministering efforts.

Relying on Revelation Amidst Heartache

Sister Kapp’s form of Christlike ministering has additional significance considering she always longed to have a large family, but was never able to have children of her own.

“You go through this agonizing procedure of thinking, ‘Well we must not be worthy,’ and then he [her husband] is called as a bishop and I’d think, ‘It must be me that’s not worthy,’” she admits. “It was a hard time because everyone kept saying, ‘Don’t be selfish, you could adopt and you could love children. Don’t let that keep you from having a family.’”

Sister Kapp and her husband prayed earnestly and went to the temple frequently to inquire of the Lord and ask if they should adopt. But the assurance consistently came back that they were not to have children at this time.

“And you don’t explain that to anyone, but that was a hard time for us,” she recalls.

Years passed, and Sister Kapp watched her friends and family raise their families. Her younger sister had 11 children, and there was a certain pain she felt at not being able to have one of her own. But through it all, she relied on her faith.

There were other times when Sister Kapp also received assurances that she and her husband were doing what God would have them do.

“Thirty years later, when I was called as Young Women general president, the prophet indicated that we were on the right track and we would raise our children during the Millennium when Satan was bound,” she says. “So we just had to hang onto that.”

In exchange for the “400,000 prayers” she said for a child of her own, Sister Kapp has blessed the lives of thousands of young women and hundreds of missionaries and temple ordinance workers.

“So when I see women who say, ‘Oh, you were the Young Women leader when I was a girl,’ I say, ‘That makes you one of my girls.’”

And it’s true. When I walked into her house, Sister Kapp said to me, “You must have been a beehive when I was Young Women president.” The truth is I wasn’t even born at the time of her call but as we sat across from each other in the home office Sister Kapp shared with her late husband and I listened to her share memories of where the Church has been as well as hope for where it is headed, I felt love radiating from the woman sitting across from me—love that was enough to fill empty spaces in the hearts of thousands of young women all around the world.

As I confided in her that at times I feel like people question my path in life, she told me she understood and spoke of trusting in personal revelation. And when I told her that I sometimes feel inadequate and unqualified to sit in sacred spaces with people like her?

“It’s the same thing (with me),” she said, with a twinkle in her eye. “How would a little girl in a farming community (be here)? We don’t know. The Lord knows who we are and where we are. But we stand in amazement, don’t we?”

Photos: By Spenser Heaps, courtesy of the Deseret News.

Note from the author: Sister Kapp suggested that we take a picture together. After a few failed attempts at a self-timed picture, she said "Should we kneel? We're women who know how to kneel." 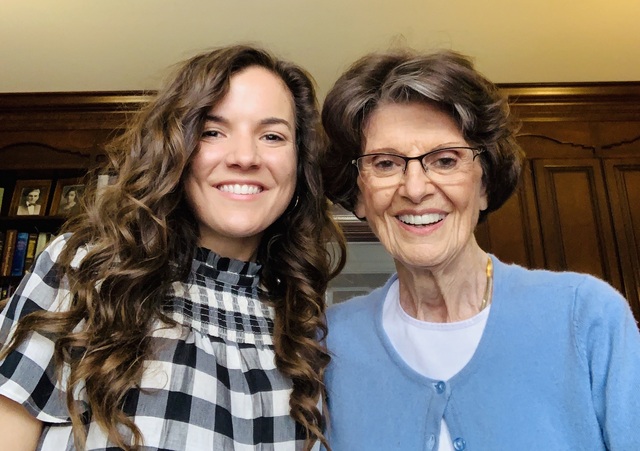