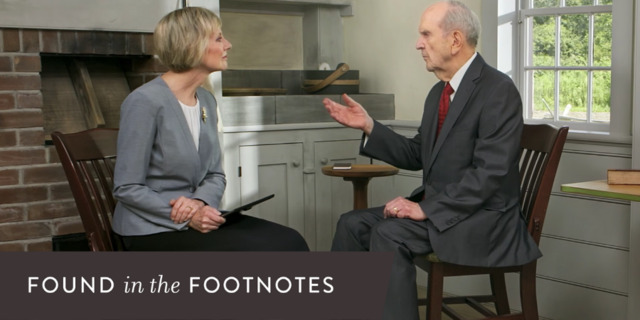 A few weeks ago, a friend posted on social media that his daughter had asked him what he thought a woman’s role in the Church was. As I read the conversation he had with his daughter, I felt compelled to ask myself, “What would I say if my daughter asked me this question?”

Now, I’m not a parent, nor am I a wife. But as I reflected on the question, I had a few ideas come to mind. Here are three of the thoughts I hope I would share.

1. “The world’s greatest champion of woman and womanhood”

In the sixth footnote of President Bonnie H. Cordon’s talk, she references an article in the March 2015 Ensign, “The Savior’s Respect for Women,” by Robert and Marie Lund. Whenever I find an article like this in a footnote, I feel as though a Church leader has given me a window into his or her personal study. And as I studied this article, I felt as though President Cordon had invited me to join her study.

The Ensign article found in President Cordon’s footnotes begins with a powerful quote from Elder James E. Talmage: “The world’s greatest champion of woman and womanhood is Jesus the Christ.”

Throughout the article, the Lunds explore the stories of four women in the Gospel of John: Mary, the mother of Jesus; the Samaritan woman at the well; the woman taken in adultery; and Mary Magdalene. As I read through the accounts and the Savior’s interactions with these women, several of the words written by the Lunds struck me:

The accounts of these four women not only reveal the character of the Savior, they also reveal the power of women. The faith of women led to miracles. Women acted as witnesses of Christ.

As Elder Talmage said, the Savior is “the world’s greatest champion of woman and womanhood,” and surely women in His Church should be champions of Christ.

Speaking at a BYU devotional, President M. Russell Ballard said, “Our dispensation is not without its heroines. Countless women from every continent and walk of life have made dramatic contributions to the cause of Christ. . . . My question is, ‘Will you be one of those women?’”

President Jean B. Bingham, Relief Society General President, has taught: “To all of us who have daughters and sons, nieces and nephews, young women and young men—will you teach them this? Teach them that in Church callings, temple ordinances, family relationships, and quiet, individual ministry, Latter‐day Saint women and men go forward with priesthood power and authority. Teach them that the interdependence of men and women in accomplishing God’s work through His priesthood power is central to the restored gospel of Jesus Christ and will help prepare the world for the Savior’s Second Coming.”

If you feel like teachings about women and the priesthood have increased in recent years, you’re not wrong. On a recent bonus episode of the Sunday on Monday study group, Barbara Morgan Gardner, author of The Priesthood Power of Women, made an observation that I found very interesting. She noted that the amount of talks on women and the priesthood given by members of the First Presidency and the Quorum of the Twelve Apostles in the last two years is more than the total amount of talks given on the subject since the time of Joseph Smith.

So, I hope if my daughter asked me about her place in the Church, I would explain how she has access to priesthood power. And I hope I’d also explain that I’m still learning about it myself—and I’m not alone in that.

A recent Church News series, “Women of Covenant,” highlights what General Presidency members of the Relief Society, Young Women, and Primary have learned while acting on President Russell M. Nelson’s invitation to “labor with the Spirit to understand God’s power—priesthood power.” I find strength in knowing that as I labor to understand more, I’m laboring alongside leaders in the Church acting on a prophet’s invitation.

3. Women are key witnesses to the events of the Restoration

“One of the most important aspects that I am reminded of when I come to this restoration of the priesthood site is the important role that women played in the Restoration.

“When Joseph first started to translate the Book of Mormon, who did the writing? Well, he did a little, but not much. Emma stepped in.

“And then I think of how Joseph went into the woods to pray near their home in Palmyra, New York. Where did he go? He went to the Sacred Grove. Why did he go there? Because that’s where Mother went when she wanted to pray.

“Those are just two of the women who had key roles in the restoration of the priesthood and in the Restoration of the Church. No doubt, we could say our wives are just as important today as they were then. Of course they are.”

Of the experience, President Bingham told Church News in a recent video, “I thought about the things that happened in that grove that have impacted my life. And I thought about President Nelson, who is now the legal successor of the Prophet Joseph Smith. And I thought, ‘This is an absolutely remarkable experience to be listening to this declaration, this proclamation about the Restoration that has impacted every single person who lives upon the earth, delivered by our 95-year-old prophet, who is strong and vital and has all the keys of the kingdom.’”

President Nelson could have invited anyone to have this experience, but he chose women leaders. In October 2019, he chose to announce temples during the Women’s Session. Both of these examples lead me to believe women’s vital role in the Restoration lives on.

What I’ve found as I’ve embarked on my journey to figure out my role is that the Lord is gracious, and He will teach us liberally.

Speaking of women’s ability to draw priesthood power into her life, President Nelson said, “You won’t find this process spelled out in any manual. The Holy Ghost will be your personal tutor as you seek to understand what the Lord would have you know and do. This process is neither quick nor easy, but it is spiritually invigorating.”

Most importantly, I hope I would tell my daughter that the process isn’t easy, but the blessings and eternal knowledge are worth it. I know the Lord is guiding me so I can reach my divine potential. With Him, I cannot fail.

For more on this topic, be sure to check out The Priesthood Power of Women. In this book, author Barbara Morgan Gardner explores teachings of the living prophets and scriptures to increase our understanding of God's power as it operates in the temple, the Church, and the family. Her well-documented research demonstrates that women have more authority and power in all those settings than they may have previously supposed. Available now at DeseretBook.com.