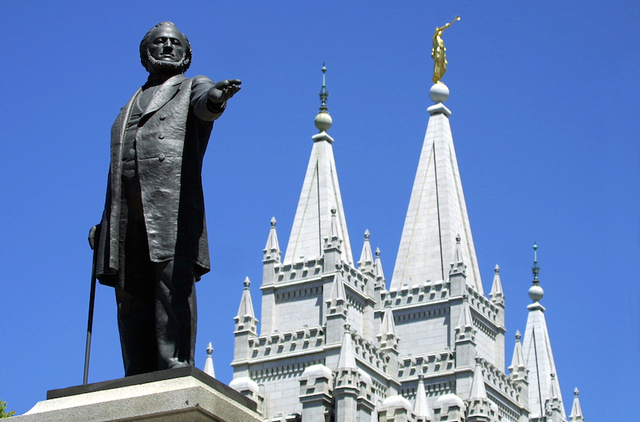 What In the World Do People Think About Mormons? Research Reveals

LDS Filmmakers Daryn Tufts and Jed Knudsen once travelled the country to find out about the typical perception of Mormonism from an outsider. Their findings, documented in a hilarious DVD called "American Mormon," varied greatly.

Some people called the Church a "crazy religious group," others had kinder sentiments. Some people knew about "the whole multiple-wife thing," others mentioned the Church's propensity for unrelenting kindness. A few mistakenly thought that Mormons weren't allowed to dance or watch TV, but others correctly surmised that tobacco and coffee are banned.

One other misconception they discovered people shared is that Mormons "definitely can't use computers or phones," which is particularly ironic because you're almost certainly reading this on your computer or phone right now.

► You'll also like: 9 Things People Get Wrong about Mormons

Very few people, though, had absolutely nothing to say about the Mormons. Indeed, ever since the Church's formation in 1830, Mormonism has been a subject of much discussion in America. So what are the public's general perceptions now? Let's take a look at aPew survey from 2014 to find out.

Over 10,000 American adults were interviewed for the survey, which sought to uncover perceptions about not just Mormonism, but many of the country's major religions. The major question was one of general opinion--how do you feel about (insert particular religious group here)?

The most positive responses were given to Jews, Catholics, and Evangelical Christians, while the least popular belief systems were Islam and atheism. Mormons, however, fell toward the bottom of the middle (along with Hindus and Buddhists), with a net positivity rating of 48%. This rating suggests that those surveyed did not "feel particularly positive or negative" about Mormonism.

These findings are a step in the right direction for our country, who once harbored intense and widespread prejudices for Mormons, Jews, and Catholics. Today, that prejudice is largely focused on Muslims, but a long-held prejudice against atheism also pervades our society.

When considering our feelings toward those of other belief systems and ways of life, Mormons would do well to remember the words of Elder Russell M. Nelson, who challenged "all people everywhere to recommit themselves to the time-honored ideals of tolerance and mutual respect." He continued, "We sincerely believe that as we acknowledge one another with consideration and compassion we will discover that we can all peacefully coexist despite our deepest differences."

Following this advice will lead to more loving relationships with those who do not share our beliefs and, in turn, will often lead to our own beliefs being respected more.

Another telling result of the survey came on a political spectrum. Mormonism was again in the middle of the road with respect to the Republican party, but Democrats viewed Mormons less favorably than any other religious group.

Finally, the question was asked: do you personally know somebody who is (insert particular religious group here)? Unsurprisingly, most people knew somebody who was Catholic or not religious. Less that 25% of people knew somebody from the prominent Eastern religions, Buddhism and Hinduism. And once again, Mormonism fell pretty close to the middle, with 44% of Americans reporting that they know a Church member.