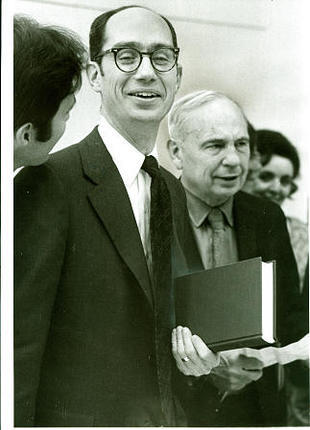 Nelson family laughing together. Photo from LDS.org.
A story of grandfatherly love, from "A New Harvest Time":
Family love is wonderful. Nothing is as specific as the love of a baby for its mother. Nothing is as predictable as the love of children for their parents or the love of parents for their children.
Recently I was tenderly hugging one of our precious little five-year-old granddaughters and said to her, “I love you, sweetheart.”
She responded rather blandly: “I know.”
I asked, “How do you know that I love you?”
“Because! You’re my grandfather!”
That was reason enough for her. Indeed, we do love our grandchildren. We also love our grandparents. I cherish the memories of life with three of my four grandparents. I never met my Grandfather Nelson. He died when my father was only 16 years old. At the time of Grandfather’s passing, he was superintendent of public instruction for the state of Utah. He owned a handsome pocket watch, which my father later gave to me. Now that watch is a tangible link between us.
I think of my Grandfather Nelson with deep feelings of gratitude. I received much of my early education in schools he helped to develop.
A story of priorities in parenthood, from "Living By Scriptural Guidance":
Time for scripture study requires a schedule that will be honored. Otherwise, blessings that matter most will be at the mercy of things that matter least. Time for family scripture study may be difficult to establish. Years ago when our children were at home, they attended different grades in several schools. Their daddy had to be at the hospital no later than 7:00 in the morning. In family council we determined that our best time for scripture study was 6:00 A.M. At that hour our little ones were very sleepy but supportive. Occasionally we had to awaken one when a turn came to read. I would be less than honest with you if I conveyed the impression that our family scripture time was a howling success. Occasionally it was more howling than successful. But we did not give up.
Now, a generation later, our children are all married with families of their own. Sister Nelson and I have watched them enjoy family scripture study in their own homes. Their efforts are much more successful than were ours. We shudder to think what might have happened if we had quit trying.
1-15