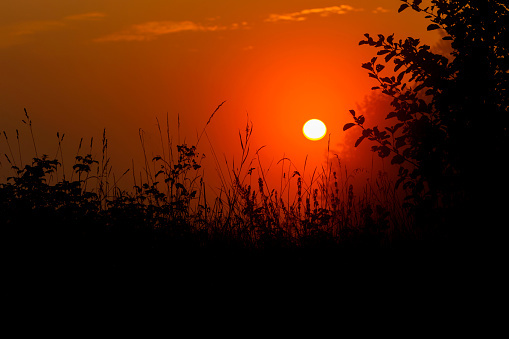 Famines, pestilences, earthquakes, tribulations, hailstorms, scourges, sickness, commotion, killing, iniquity, blood, fire, vapors of smoke, thundering, lightning, darkness, tempests, flooding, and other disasters are among some of the calamities prophesied about in the scriptures.

To some people, a few of the more intriguing prophecies about the last days have to do with the sun being darkened, the moon being turned into blood, the stars falling from heaven, and the powers of the heavens being shaken—all before the Second Coming of the Lord (see D&C 45:42). These events are also mentioned several other places in the scriptures (as examples, see D&C 29:14; 88:87; 133:49; Joel 2:10; Revelation 6:12; Matthew 24:29; Joseph Smith—Matthew 24:33).

I spent one summer of my high school years fighting forest fires near Mount Trumbull, Arizona, which was at that time part of the Kaibab National Forest. My fellow worker and I spent most of our time using chainsaws to trim trees and to clear the roads of fallen timber. Occasionally forest fires broke out, and we were immediately called on to put out the fires. As we worked to extinguish every last spark, the moon at night sometimes appeared to be red in color; at other times, we couldn’t even see it. On occasion, during the day the sun was almost blacked out.

I assumed the moon and sun appeared this way because of all of the smoke in the air. The scriptural references to the sun being darkened and the moon being turned into blood (or not giving its light) took on a different meaning for me. Could it be that these prophecies are showing how these heavenly bodies will appear to men on earth rather than describing actual physical changes in their matter?

I appreciate the insights Elder Bruce R. McConkie gave concerning the sun, moon, and stars and the heavens being shaken:

There may be more than one occasion when the light of the sun and the moon shall be withheld from men, and when it will seem as though the very stars in the firmament are being hurled from their places. What is here recited could mean that the light of the sun is blotted out by smoke and weather conditions, which would also make the moon appear ‘as blood.’ This falling of the stars ‘unto the earth’ could be meteoric showers, as distinguished from the stars, on another occasion, appearing to fall because the earth itself reels to and fro (The Millennial Messiah, 380).

Knowing that the earth is to reel to and fro, knowing that the mighty deep shall return to its place in the North, knowing the continents and islands shall join together again, what about the stars and their fall from heaven? Our answer is that it will seem to men on earth as though the stars—those great suns in the sidereal heavens around which other planets revolve—are falling because the earth reels. The great fixed stars will continue in their assigned orbits and spheres. The sun also will continue to give light, but it will appear to men to be darkened; and the moon will remain as she has since the creation, but it will seem to mortal eyes as though she is bathed in blood (The Millennial Messiah, 412).

Some people seem to believe that the calamities prophesied about in the scriptures will not really happen. President Ezra Taft Benson gave this warning:

“Too often we bask in our comfortable complacency and rationalize that the ravages of war, economic disaster, famine, and earthquake cannot happen here. Those who believe this are either not acquainted with the revelations of the Lord, or they do not believe them. Those who smugly think these calamities will not happen, that they somehow will be set aside because of the righteousness of the Saints are deceived and will rue the day they harbored such a delusion” (“Prepare for the Days of Tribulation,” Ensign, Nov. 1980, 32).

Elder McConkie summarized various last-day calamities that will happen before the Second Coming in this way:

Before the Lord comes, the whole earth will be in turmoil. Wars and rumors of wars will spread death and destruction and disease that will dwarf anything ever known among men. Plagues and pestilence and pain will punish the people to a degree never before known. Men will be cursed physically and spiritually; the flesh of many will fall from their bones and eyes from their sockets. Earthquakes will destroy many cities and bring death to their municipals; fire and hail will destroy the crops of the earth; rivers and seas and deserts and mountains will be contaminated; the waters of the world will be polluted; famines and poisons and dead bodies will be commonplace. No tongue can tell the desolations and sorrows that are yet to be, all of which will be climaxed by the burning of the vineyard, at which time every corruptible thing will be consumed (A New Witness for the Articles of Faith, 633).

The Lord is hastening His work throughout the world. The increase in the number of missionaries could serve as an example of this. In the early days of the Church in this dispensation, the Lord sent His servants out to warn the people and “prepare the saints for the hour of judgment which is to come” (see D&C 88:81–84). The Lord told the early missionaries that after they had shared their testimony, “wrath and indignation” would come upon the people. He also said, “For after your testimony cometh the testimony of earthquakes . . . and also cometh the testimony of the voice of thunderings, and the voice of lightnings, and the voice of tempests, and the voice of the waves of the sea heaving themselves beyond their bounds. And all things shall be in commotion” (D&C 88:88–91). We see many of these prophetic events happening today.

The Lord’s warning voice concerning “the waves of the sea” could be a reference to the flooding that takes place during storms—and what about the tsunamis that have taken place? Until recent times, we didn’t hear the word tsunami very much, but now many people have been affected by the terrible consequences of these events.

President Henry B. Eyring shared insights about the last days and some very faith-promoting stories about some of these disasters as he spoke to students in a devotional at BYU—Idaho. He said that “the giant earthquake, and the tsunamis it sent crashing into the coasts around the Indian Ocean, is just the beginning and a part of what is to come, terrible as it was.” He then quoted some of the same scriptures to which we have been referring (see D&C 88:88–91) and said:

Fear shall come upon all people. But you and I know the Lord has prepared places of safety to which He is eager to guide us. I think of that often. A few days ago, I heard two accounts of God leading His children to safety on the coast of Thailand when that monstrous tsunami wave struck.

One was of people who accepted His apparently routine invitation to a Church meeting on a Sunday. . . . The meeting was on higher ground, away from the coast. The people who gathered with the Saints were spared from physical death. . . .

The other account I heard was related to me by a Latter-day Saint who was led to safety by the Holy Ghost. He checked into a hotel on the oceanfront in Thailand the day before the wave struck. He walked out on the beach. He felt uneasy. He went back to his hotel determined to check out. . . . He moved to another hotel, away from the beach. It was on higher ground. Because of that, he not only survived but stayed to serve the survivors. The Lord is anxious to lead us to the safety of higher ground, away from the path of physical and spiritual danger (“Raise the Bar,” Brigham Young University—Idaho Devotional, Jan. 25, 2005).

From devastating natural disasters and false doctrines to apocalyptic wars and darkened skies, prophecies regarding the last days can induce fear in even the most faithful of hearts. But in Prophetic Events of the Last Days, gospel scholar Richard L. Judd reminds readers that the events to come have long been foretold and Latter-day Saints have the keys to thrive in these turbulent times.