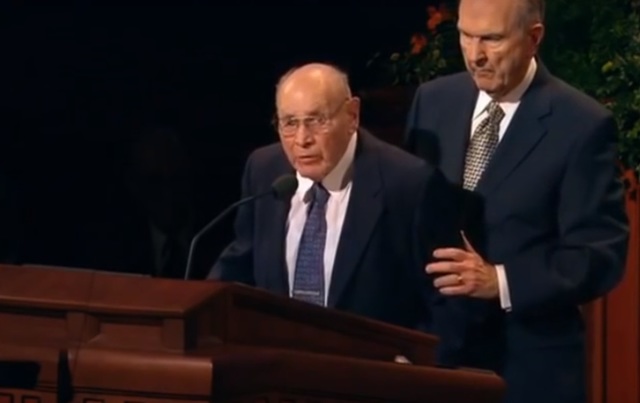 In the October 2007 general conference, Elder Joseph B. Wirthlin stood at the pulpit delivering an exquisite talk on charity. Despite his powerful words, Elder Wirthlin began to shake during his delivery, and that's when a beautiful example of charity accompanied Elder Wirthlin's talk. President Russell M. Nelson, then Elder Nelson, stood behind Elder Wirthlin and gently placed his hand on his arm, letting Elder Wirthlin know he was there for him, willing to support him if need be.

With President Nelson's recent ordination as our new prophet, I've read over news stories or blogs about our new Church leaders and have often thought of this moment. While the world may be speculating about or even criticizing our Church, I realized President Nelson provided the perfect example of what we, as members of the Church, can do to sustain our Church leaders.

Much like he was willing to support Elder Wirthlin in 2007, President Nelson is now willing to give his entire life in supporting our Church and performing the Lord's will. While the pressures placed on his shoulders are immense and even daunting, he's encouraged us all to look forward with hope and optimism. "Now, we must look forward to the future, with complete faith in our Lord Jesus Christ," President Nelson said in his first address to Church members.

In a similar manner, we as members of the Lord's Church can stand behind our prophet and new Church leaders, offering a comforting, steadying hand, willing to support and sustain them. While we do not know what the future will hold, we can each ground our actions in charity, letting love and a desire to understand guide us moving forward.

We are blessed to have President Nelson as our prophet on the earth today and I'm excited about the unique perspective he can provide for the Church and its members.

As President Nelson said from a broadcast inside the Salt Lake Temple this week, "Whatever your concerns, whatever your challenges, there is a place for you in this the Lord's Church. . . . Our Father in Heaven cherishes His children and wants each of them to return home to Him. . . . I express my great love for you, one that has grown over decades of meeting you, worshipping with you, and serving you."

I'm excited to continue loving, worshiping, growing, and serving with President Nelson and I am grateful for the example he has set of sustaining our Church leaders during the challenges of life.