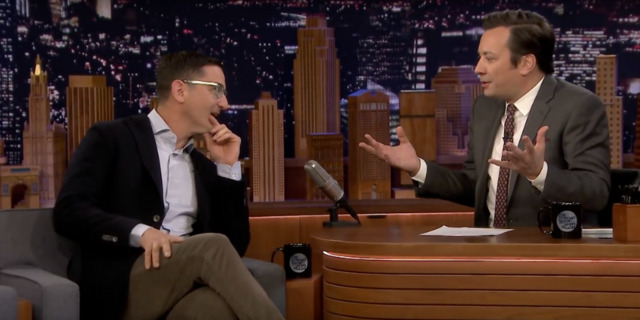 Members of The Church of Jesus Christ of Latter-day Saints have recently been praised in publication and in broadcast for their entrepreneurial spirit.

Guy Raz, known for his popular NPR podcast How I Built This appeared on The Tonight Show Starring Jimmy Fallon last week. On his podcast, Raz interviews entrepreneurs, so Fallon asked Raz what all of these entrepreneurs have in common.

He then references a podcast episode where David Neeleman, known for founding airlines like JetBlue and Azul, spoke about how missionaries develop the ability to withstand rejection.

“They will go to 1,000 homes a week and 990 doors will slam in their faces as they’re trying to spread the word,” Raz said. “[Neeleman’s] theory is that they develop this resiliency—this resiliency toward rejection—after withstanding all of this rejection.”

► You may also like: Church Mentioned in Jimmy Kimmel, Jimmy Fallon Video

Praising other aspects of the Latter-day Saint entrepreneurial spirit, Marker, a business publication from Medium, recently released a feature called, “How Mormons Built the Next Silicon Valley While No One Was Looking.” The publication also highlights business skills gained on a mission when talking about current Utah CEOs.

“Most of these founders have gone through what amounts to perhaps the most strenuous sales ‘boot camp’ in the world: a two-year mission spreading Mormonism abroad,” the article reads.

The article highlights members of The Church of Jesus Christ of Latter-day Saints who pioneered the Utah tech industry including:

The article points to pioneer heritage for the enterprising nature of Latter-day Saints.

It also notes a stark difference between the Utah Silicon Slopes and the California Silicon Valley—the cultural emphasis on families.

► You may also like: Forbes Magazine ranks Utah 'the best state for business'

“The family unit defines work and social life here (especially since Mormons believe families stay together for eternity),” the article states. “. . . Perhaps the oddest perk, though, for anyone used to startup culture elsewhere: No one is going to look at you funny for leaving while it’s still light outside.”

“If I look out at the parking lot at 5 p.m, it’s probably 25% full,” Eric Rea, CEO of Podium told Marker. “That’s one of the big differences, I think, between the Bay Area and Utah,” he says. “I don’t want you to get divorced because you work at Podium.”

READ THE REST OF THE STORY AT Marker. Note: The article does contain some profanity.

Business Jimmy FallonBusiness,Jimmy Fallon,
Comments and feedback can be sent to feedback@ldsliving.com