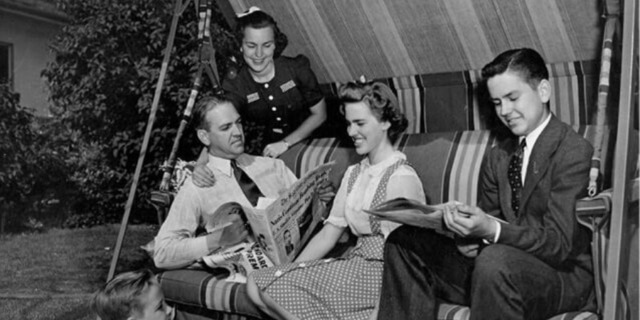 Editor's note: The following is excerpted from Fathers of the Prophets and shares a story of President Russell M. Nelson, his wife Dantzel, and his parents, Marion Clavar and Edna Nelson.

For decades, Russell had longed to be sealed to his parents and siblings in the temple. He and Dantzel had “nagged” Marion and Edna repeatedly on the subject, even gifting them with scriptures and songbooks with their names engraved on them. These gifts were never opened. “They were the kind of people who didn’t like to be pushed,” Russell recalled. But the tide turned during President Spencer W. Kimball’s eightieth birthday celebration.

The Nelsons had a special relationship with Spencer and Camilla Kimball. The Kimballs were beloved mentors, and both had undergone surgery at Russell’s hand. When President Kimball spotted Marion and Edna in the banquet room for the birthday celebration, Russell recalled, “[President Kimball] deviated on his trip to the head table and came over and I introduced him to my mother and father. He kissed my mother . . . and said ‘I want to thank you for being the mother of the man that saved my life.’ President Kimball gave Daddy a kiss and said, ‘Thanks for teaching your son to be a man of integrity.’” Apparently, the exchange had a profound effect on Marion.

A few days later, Russell received a long-awaited communication from his father: “Son, I think we’re ready. We want to get our marriage solemnized in the temple. How do we do it?” Russell reflected, “All my cajoling, nagging was for naught. But one act of love made a difference. . . . The minute you can turn the love valve on, you’ve got a chance. The more [we] nag, the less likely [we] are to be successful. Because who wants to live eternally with a nag?!”

Over the next few months, Marion prepared for and received the priesthood, being ordained to the office of an elder by his son Russell on February 6, 1977. Marion was eighty years old. Russell introduced him to his stake president, Jon M. Huntsman Sr., and the temple recommend interview was scheduled. Marion related, “All my life I’ve dreaded that interview. [But] that interview was the sweetest experience I’ve ever had. He asked me all of those questions and I didn’t even know he was asking them!”

The following month, on the beautiful spring day of March 26, 1977, Marion and Edna received their endowments and were sealed for time and all eternity in the Provo Utah Temple by a member of the temple presidency, Joseph T. Bentley. Following these sacred ordinances, their children were sealed to them. Russell recorded in his journal in all caps, “MOTHER AND DADDY WERE SEALED FOR TIME AND ETERNITY.” The change in Marion and Edna was “total,” Russell related. “They became totally dedicated. In fact, Daddy said to me one day, ‘What are we going to do about your brother? We’ve got to get him active in the Church.’”

After the sealing, the family gathered at Russell and Dantzel’s vacation home in Midway for a dinner celebration. The Nelson tradition of strong family relationships took on deeper meaning, as it was not only family first, but family forever. Russell relates, “Of all the many great things they had done for all of us through the years, this was the greatest, for it provided the continuity and unity that would perpetuate our family unit into the eternities ahead.”

Lead image: This photo of Marion with his children was taken to be run on Father’s Day, 1941, in the Salt Lake Tribune.

In a world where the role of fatherhood is increasingly maligned, marginalized, and even dismissed, this book highlights the irreplaceable role of fathers in the lives of the chosen servants of the Lord, and in the lives of children the world over. Fathers of the Prophets is filled with stories and moments that will both inspire and delight. As you come to know and love the fathers of the latter-day prophets, your testimony will be strengthened and you will witness the hand of the Lord in guiding the restoration of His Church through men called to be fathers. Available now at DeseretBook.com.