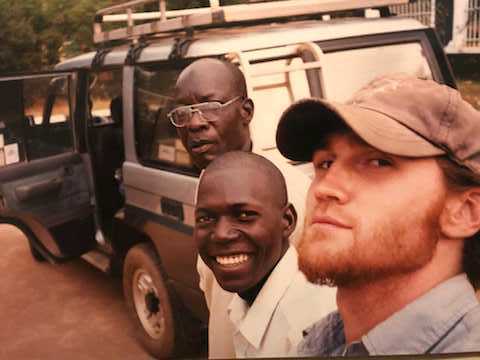 What Volunteer Work Taught One Man About Connection Despite Differences

Arthur was in his 20’s when he graduated from BYU when he started looking for his next adventure.

Serving as the captain of the men’s soccer team while at BYU, he became excited when he heard about Right to Play, an organization that works with helping children in need by teaching them about educational games.

“And I kind of got excited about their work and what they were doing and the way I could maybe bring my soccer knowledge and experience to the refugees in war-torn Uganda,” Arthur says.

So he interviewed for Right to Play and became a volunteer. He traveled with a group of six to eight additional volunteers to Uganda to work with the United Nations High Commissioner for Refugees (UNHCR) in hopes of implementing sports programs for refugee kids. Arthur didn’t realize what he’d gotten himself into as he flew over the Sahara and into the tiny little village of Arua, Uganda.

“I think as we’re coming in, it’s very surreal. It doesn’t feel like anything you’re comfortable or familiar with,” he shares.

The village they landed in was the hometown of the Ugandan former President Idi Amin, who was a dictator known for his mass genocide towards certain tribes within Uganda—events which had left the people of the village scarred. In addition to that, there were thousands of refugees in camps an hour and a half away who had fled from civil wars and conflicts, crossing borders from the Congo and the Sudan.

Arthur didn’t know how teaching soccer to these refugees, who were facing poverty, escaping violence, and experiencing trauma from war, would provide any solutions to their current circumstances. “You’re looking at real poverty, real desperation, and you're supposed to have answers, you’re supposed to have solutions, and the truth is, we really didn’t.”

Though he desired to help these people, Arthur felt like he wasn’t making a difference and that he didn’t have much to offer.  “I asked myself every day I was there whether or not we should even be there. It was that complicated.”

That is, until he met Ayub, a laid-back Muslim man with a missing tooth who became his “taxi” driver to and from the refugee camps and the village.

Ayub participated in Ramadan, or the Holy month of Islam, a time of Thanksgiving when Muslims fast from sun up to sundown. Even considering the little resources and how hard it was to come by food, Ayube still didn’t eat. It was during this Ramadan that Ayub was able to share some of his religious experiences with Arthur.

“We were traveling back and forth between the camps and its long dusty terrible roads, sometimes if it was in the rainy season, there’s mud and cars sliding off the road. As soon as the sun would go down during Ramadan, (Ayub) would pull over and walk into a stranger’s hut who had prepared a meal for anybody who happened to be traveling through or traveling by and he would always include me and bring me into that, intimate sort of brotherhood of Islam that was especially poignant during Ramadan.”

Although he had little in common with Ayube and they were raised in two very different places, Arthur felt like he had built a real friendship with Ayub. One day, as they were driving back from one of these Ramadan meals, Ayub turned to Arthur, who he called Thomas, as he couldn’t pronounce Arthur’s name, and said:

“Thomas, when we breathe, we breathe in the name of God.”

The words struck Arthur with meaning. “That’s the only thing we had in common was the air we breathe,” Arthur says. “But it came from God; we had the same maker. We had the same Heavenly Father.” Even if they didn’t share the same religion and were raised on different continents, it didn’t matter. Ayub saw Arthur as his brother. And Arthur was grateful to know all the things he believed about humanity were real.

This lesson continued to serve Arthur throughout the six months that he was in Uganda and as he continued to build his friendship and brotherhood with Ayub. Arthur says that of anything Ayub taught him, it was to be grateful for connection more than things. He concludes,

“All of the labels and all of the layers of identity we carry around with us based on our religion, our skin color, our gender, all of those things, they end up just stacking up so many walls and obstacles to getting to the heart of connecting with somebody. So when you can find someone you can cut through all that nonsense with and see them for who they really are, that’s when I feel welcome. That’s what I think gratitude means, what feeling welcome means, and when real charity can live.”

Listen to the full podcast episode below or click here to view the full transcript and show notes for this episode.