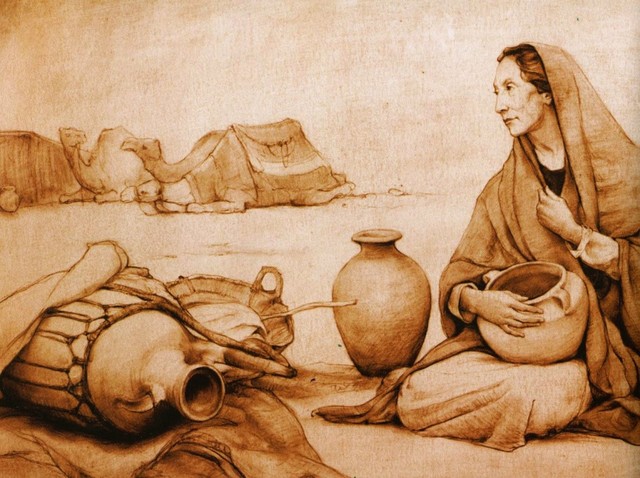 Sariah is one of the few named women in the Book of Mormon. Her contribution in the family dynamics of Lehi’s party was crucial to the success of the journey to the Promised Land.

Based on clues from the Book of Mormon, Lehi had wealth and standing in the Jerusalem community. That would mean that Sariah would have likely had a comfortable dwelling, perhaps some servants, too. In her responsibilities as the matriarch of the family, she likely managed all operations of domestic activities, including resources to maintain the family home. She probably had a network of female friends who provided mutual support. She had much that anyone could desire for a stable, happy, prosperous life.

A prosperous life she left mostly behind to enter a forbidding wilderness.

Even today, the Judean Wilderness and the Arabian Peninsula are not accommodating places to the needs of humans. Water and food are scarce. The heat can be unbearable. The possibility of highway robbery is real. Significant daily physical toil is essential to maintain life and to get from one place to another. Wind and sand are constant companions. All belongings must be carried by humans or pack animals, the latter which have similar needs as humans for water and food. In addition, centuries-old traditions of nomadic life in the ancient Middle East suggest that women performed the bulk of daily work in camp, including packing and setting up tents, caring for children and livestock, and cooking.

We may struggle to imagine the difficulties Sariah and her family suffered, especially considering that we have speedy travel with cars and airplanes, air conditioning and heat on demand, and water and food in such abundance we have more people dying in our society from too much rather than the lack therefore.

Yet, even with such conveniences, modern day family trips and outings are rarely without grumbling and complaining. In our modern way, we can sympathize with Sariah’s occasional complaining. The increased hardships she must have assumed to maintain wilderness living for eight years were daunting. Sariah’s experience was challenging physically as well as spiritually.

After several weeks of travel into the wilderness, her four sons returned to Jerusalem in obedience to a revelation Sariah’s husband received from God. Danger lurked everywhere around Jerusalem. Inhabitants wanted to kill Lehi (and perhaps other members of his family, including the returning sons) and Laban was a military leader, “a mighty man, and he can command fifty, yea, even he can slay fifty” (1 Nephi 3:31). Traveling in the desert itself posed many risks. The round-trip journey for Sariah’s sons could have been as far as 500 miles and would have required a minimum of three weeks.

That is a lot of time for Sariah to fret in the desert, to worry and wonder, “What has become of my sons? Are they alive? Have they become food for wild beasts? Have the inhabitants of Jerusalem detained them? Executed them?”

With no access to modern forms of communication, Sariah would have no status updates on her boys except through revelation.

During these difficult times, she complained regularly to Lehi, saying, “Behold thou hast led us forth from the land of our inheritance, and my sons are no more, and we perish in the wilderness” (1 Nephi 5:2).

Lehi comforted Sariah with his trust in God, “I know that the Lord will deliver my sons out of the hands of Laban, and bring them down again unto us in the wilderness” (1 Nephi 5:5).

Though Sariah trusted Lehi’s witness from God enough to leave everything behind in Jerusalem before, with the threat of losing all four of her sons, her faith was tested beyond what her husband’s faith could compensate. She needed to learn for herself to trust God that He “will show unto you that the tender mercies of the Lord are over all those whom he hath chosen, because of their faith, to make them mighty even unto the power of deliverance” (1 Nephi 1:20).

Sariah needed her own testimony that God would fulfill His promises. This was her moment of testing.

When her sons returned from the long errand, “Sariah, was exceedingly glad, for she truly had mourned” because she thought her sons had perished (1 Nephi 5:1).

Nephi recorded a direct quote from his mother Sariah that reflects her newfound spiritual independence, “Now I know of a surety . . .” In this quote, her expression of faith plays upon the meaning of her own name. In Hebrew, Sariah means “Jehovah [iah] is a prince/commander [sar]. Her testimony is cited in chiastic structure. Her name begins and ends the quote and then at the center is her name pointing to the Lord Jehovah [iah] described with three characteristics of what it means to be a prince or commander [sar].

A  “Now I know of a surety that the Lord [iah] hath commanded [sar] my husband to flee into the wilderness;

B  yea, and I also know of a surety that the Lord [iah] hath protected my sons, and delivered them out of the hands of Laban, and given them power

A   whereby they could accomplish the thing which the Lord [iah] hath commanded [sar] them” (1 Nephi 5:8, emphasis added).

Significantly, mother Sariah’s testimony seems to have had a powerful impact on Nephi’s own testimony, recorded years later when he remembered saying to his father,

“I will go and do the things which the Lord [iah] hath commanded [sar], for I know that the Lord [iah] giveth no commandments [sar] unto the children of men, save he shall prepare a way for them that they may accomplish the thing which he [Lord] [iah] commandeth [sar] them” (1 Nephi 3:7).

Nephi’s record indicates the importance of his mother, not just his father, having unshakeable faith if the family was to succeed in their mission. Both were needed to shape a family that would be instrumental in producing a record that would invite generations of God’s children to come to Christ.

Sariah’s humanity is appealing. Her testimony is invigorating. Her faithfulness to God in the face of the difficult realities of life, even though she had moments of complaining, can encourage all of us each day “to try a little harder to be a little better” (President Gordon B. Hinckley, April 1995). 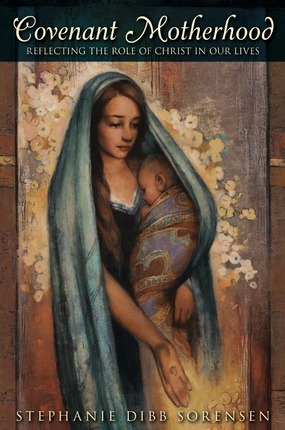 Even the most devoted mom can feel overwhelmed and discouraged in the daily trenches of family service. But she can find power in her seemingly endless and ordinary tasks when she sees how they symbolize her covenant relationship with Jesus Christ. In this insightful exploration of domestic life, Stephanie Dibb Sorensen shows how everything a mother does, from folding laundry and washing dishes to refereeing arguments and taking temperatures, is designed to bear record of the Savior’s atoning mission.

Dr. Camille Fronk Olson is a professor and the chair of the Department of Ancient Scripture at BYU.